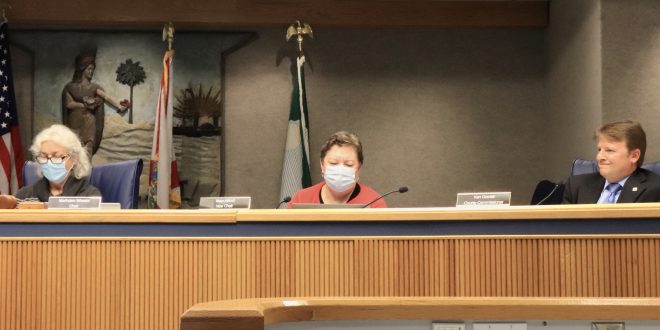 Commissioner Ken Cornell was at the center of the Alachua County Commission's opposition to a state lawmaker's proposal to reorganize and expand the governing body. (Rylee McIver/WUFT News)

The Alachua County Commission on Monday unanimously and strenuously opposed a bill set to be proposed by State Rep. Chuck Clemons to reorganize and expand the governing body.

Clemons’ bill proposes reshaping the county commission so each of its five commissioners are from and represent a single district, rather than being all at large as the composition is now. His bill also seeks to add two commissioners, both of whom would represent the county as a whole.

The commission addressed Clemons’ bill during a special meeting, a day before he was to officially propose it at an Alachua County Legislative Meeting at Santa Fe College.

Commissioner Ken Cornell led the commission charge against the measure, citing concerns with how the local bill would affect representation throughout the county.

“The bill seeks to create a larger local government that would cost the taxpayers more money and reduce each citizen’s representation and voice,” Cornell said.

Commissioner Anna Prizzia said the proposal would lead to people in each district having fewer representatives to voice their concerns then they do with the current system.

“The only thing it does is reduce representation,” Prizzia said. “Currently, we have five commissioners, we all listen to all of our constituents from across the county. We work really hard to represent all of those people.”

Prizzia added: “In this proposal, they [residents] would only have two folks that are thinking about the whole county and the bigger picture, versus the five that everyone has now.”

Cornell also said the bill would take energy and resources away from other initiatives.

“This bill will be an energy-sucking distraction from the important projects the county commission has underway,” he said.

“We have been excellent stewards of taxpayer dollars,” he said.

Cornell and Prizzia both suggested that there was a possible political motivation behind Clemons’ push to reshape the county commission by amending the county’s home rule charter.

Clemons, a Republican representative, lost Democratic-leaning Alachua County 56.36% to 43.64% in the 2020 election. He did, however, win Republican-dominated Dixie and Gilchrist counties enough to secure the District 21 seat.

“The motivation is clear,” Cornell said. “Representative Clemons’ local bill is a thinly veiled attempt to create a single-member gerrymandered county commission district in 2024, so that he or another candidate from the small but vocal portion of his base can win a commission seat in Alachua County.”

Prizzia agreed that the bill looks to undermine the current system of representation in the county, and even said it would create animosity between the districts as they vied for individual causes.

“When you start to gerrymander, and you start to change the way the districts are conformed, just so that you can get an individual on the dais, not only does it not represent the people, but it undermines the very concept of democracy and what we’re trying to do,” she said.

Cornell argued that someone seeking to reorganize the county commission typically must be one of its commissioners, the county’s charter review commission or submit a petition with signatures from 10% of registered voters in the county – about 19,000.

Clemons’ bill calls for none of those provisions to take place.

While Cornell said citizen petitions seeking to amend the commission’s composition have come forth in the past, they have not garnered enough signatures to get onto a general election ballot. He said that’s why Clemons is not proposing the amendment through any of the usual channels.

Cornell said he plans to speak against the bill at the meeting.

Rylee is a reporter for WUFT News who can be reached by calling 352-392-6397 or emailing news@wuft.org.
Previous Gainesville City Commission pledges COVID-19 relief dollars
Next The Point, Dec. 7, 2021: Here’s how Gainesville city government plans to spend its remaining federal relief money