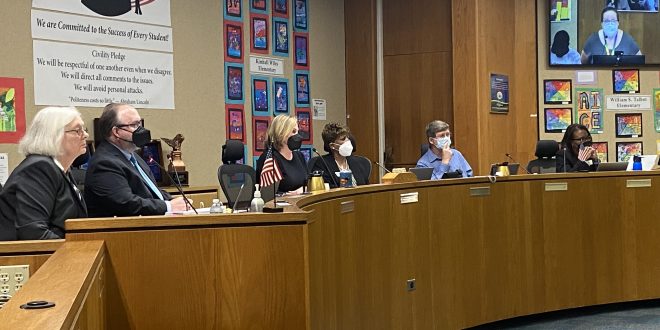 The Alachua County School Board gathered Tuesday for its first meeting following the district's decision to disable comments on its Facebook page. (Fareeha Abrar/WUFT News)

The Alachua County Public Schools officials have heard it all. These names are thrown out in various fashions: capitalized in comments under social media posts, hand-painted on signs during protests and even directly to school board members’ faces during public meetings.

The hostility ballooned to such extremes that on Nov. 12, the county indefinitely disabled comments for posts on its official Facebook page.

The county’s decision, which was fleshed out in a Facebook post, cited personal attacks, highly inappropriate postings, hostility, harassment, name-calling and threats against staff as reasons for why users can no longer comment.

“Alachua County Public Schools is not willing to provide a forum for some citizens to insult, intimidate or threaten their fellow-citizens,” the post reads.

“The tone of the comments section has really deteriorated,” she said.

A post that went up last week resulted in the release of some commenters’ personal information and what Jackie Johnson  called “ugly personal attacks.”

“That really was the final straw,” she said.

Jackie Johnson doesn’t anticipate a reversal in the decision because the only way to eradicate all inappropriate information would be to monitor the comments 24/7, which is impossible.

Community members can still make calls, craft emails and send letters, which is why Shanna Johnson, a lifelong Gainesville resident and mother to a daughter who attended Westwood Middle School and son who is enrolled in Alachua eSchool, said she finds it asinine that anyone could be “actually up in arms about it.”

“It’s a nothingburger ,” she said. “All you have to do is go look at the comments that people leave to understand why they would shut them down in the first place.”

Shanna Johnson said many commenters have nothing better to do than spew hate toward the same people who are trying to ensure children are receiving a proper education.

“There are people who enjoy trolling just to piss off other people,” she said. “Why do you find joy in that? Why is it funny to hurt somebody else?”

Joe Waddell, a biology teacher at Gainesville High School, said he often deals with frustrated parents who feel free to express all kinds of opinions.

“It doesn’t do a lot to inspire you,” he said. “It’s kind of demoralizing when you see that a certain segment of society thinks that teachers are worthless.”

Most of the comments came from parents, some of whom believe they are now being silenced.

One Facebook group reposted the ACPS announcement with the caption: “Hello censorship and silencing of parents.”

One member of the group, Robert Ward, has a seventh grader who attends The Einstein School. He believes the change is a freedom of speech breach and acts as a way for ACPS school board members to possess more control over community members.

“I feel in my heart and in my soul that this is just another way that they can cut out the parents,” he said.

Ward said he’s often placed in “Facebook jail,” which means he is temporarily barred from posting because a post on his personal account was reported by another user for being offensive.

“My rights don’t end where somebody else’s feelings start,” he said.

Clay Calvert, a professor of law with the University of Florida Levin College of Law and director of the Marion B. Brechner First Amendment Project at UF, said school district officials do not have any legal obligation to create a Facebook page. Therefore, the decision to remove all comments does not violate First Amendment rights.

Though these pages can be considered virtual public forums, Calvert said the counties can choose how they want to operate them.

Viewpoint discrimination, which is discrimination directed toward the content of speech, also does not come into play because all comments are barred rather than just a select few.

“You couldn’t suppress all of the anti-school board viewpoints and only allow up the posting of those that were pro-school board,” he said.

While the limitation is intended to prevent unproductive discourse, Calvert said it may further fuel ACPS community members’ anger.

“Typically that’s what happens when you suppress speech, it generally just drives it underground,” he said. “The problems fester.”

A new way for citizens to communicate with the district is coming soon, however. Jackie Johnson said the Alachua County School District is launching a feature on the district’s official website called “Let’s Talk,” which will act as a direct channel for people to quickly get answers to questions.

Until then, community members can attend school board meetings either in person or online, make calls and send emails to the district office expressing concerns or seeking answers to inquiries.

“There are so many ways to actively [engage],” Shanna Johnson said. “To think that this is in some way silencing people, I find ridiculous.”