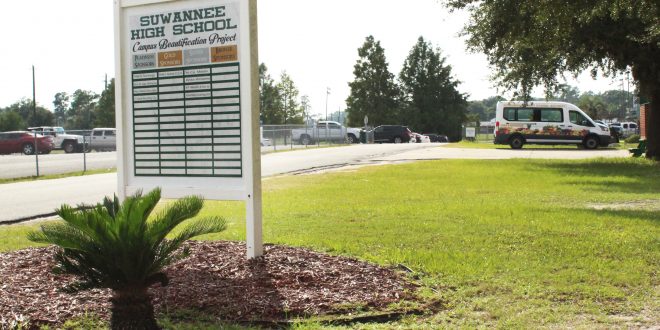 Suwannee High School is one of 10 schools in the Suwannee County School District. (Madison Chestang/WUFT News)

Suwannee County School District ran approximately half its required emergency drills in the 2020-2021 school year, according to a state audit showed when it was released in August.

The audit revealed the school district ran a documented 59% of required active shooter and hostage situation drills, and only 40% of required fire drills.

The state of Florida requires schools to conduct fire drills every month that a school is in session.

“Fire drills are a necessity in schools so that in case of an emergency, [like] a fire or carbon monoxide leak or the smell of smoke in the school, the children know where their primary, secondary, and tertiary exits could be,” James Lucas, Public Information Officer for Marion County Fire Rescue, said.

“If [students] were uninformed about the procedures of fire drills and where to exit, it could cause mass chaos among the student population,” he said. “In situations like that when a child hears a fire alarm, it creates anxiety and panic because it’s usually the unknown that is happening.”

Assistant Superintendent Malcolm Hines said emergency drills were being scheduled, but there wasn’t a mechanism to verify drills were being completed. Because the drills weren’t being correctly documented, the county is unsure of how drills their schools actually ran.

Hines, who was director of safety and security for the school district last school year, was responsible for monitoring the drill schedule and ensuring it was in line with state guidelines. He said he failed to follow up as to whether or not schools were completing their scheduled drills.

“If [drills are] supposed to be done, I would feel more comfortable [with] them doing them, just so my kids know what they’re doing if something actually were to happen,” said Amy Johnson, the parent of a child at Suwannee Pineview Elementary.

Instead of relying on the schools’ testimony that they’ve completed their drills, Suwannee County officials will be manually following up with schools via email and in-person visits to ensure that drills are conducted according to the schedule.

“Let’s say that you’re scheduled…to conduct a fire drill… I should have documentation for the district to make sure that we’re accurately tracking that you’ve completed the drill,” Hines said. “If you’ve not completed the drill…you’d be hearing from me, ‘Hey, you haven’t completed your drill, I need you to complete it within the next 24 hours.’”

Hines said he believes the district’s previous web-based system of tracking drills may have contributed to the scheduling failure. “What we found is that it’s always better for them to just send the documentation to us instead of having some electronic means to track it,” said Hines.

Despite the audit results, Johnson said she felt safe sending her children to Suwannee County schools.

Madison is a reporter for WUFT News who can be reached by calling 352-392-6397 or emailing news@wuft.org.
Previous A federal appeals court rejected the lawsuit seeking to remove the Rodman Dam
Next The Lede || Season IV Episode V: Growing into fall