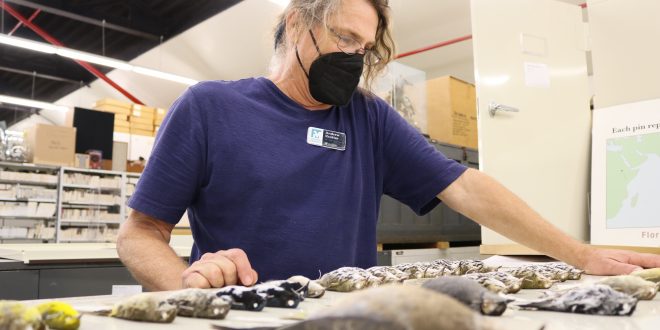 Last spring, the museum received 61 birds from the Lights Out Northeast Florida project. Once they arrived at the museum, Andrew Kratter and his team prepared the birds and labeled them based on the type of species, where the carcasses were found and the cause of death. (Ophelie Jacobson/WUFT News)

To understand how to save more birds, these Florida volunteers are collecting thousands of dead ones

Not many people can say that during their career, they’ve prepared 5,000 dead birds.

But Andrew Kratter can.

Kratter, 61, is the Ornithology Collections Manager at the Florida Museum of Natural History, which houses 25,000 dead birds and 28,000 bird skeletons. Kratter has been with the museum for almost 25 years.

Every Wednesday, Kratter and his team spend the day preparing dead birds to be added to the museum’s extensive research collection.

“I have a group of staff that helps us prepare the specimens, and also students that come in and volunteer. So it’s kind of wearing a lot of hats to keep the collection moving forward,” Kratter said.

Kratter and his team typically get dead birds from wildlife rehabilitation clinics in Florida. But last spring, the museum received 61 dead birds from the Lights Out Northeast Florida project in Jacksonville.

The Florida Museum of Natural History will be getting more birds this fall, as the project kicks off once again in time for fall migration, as birds head south for the winter.

The project organizes volunteers to walk around downtown Jacksonville and collect dead birds on the sidewalk that have run into windows and buildings as a result of being distracted by bright lights. The project also encourages tall buildings to turn off their lights from 11 p.m. to 5 a.m. every night during the spring and fall migration seasons in an effort to reduce the number of bird deaths caused by collisions.

“Our aim is to be the most important collection of Florida birds,” Kratter said. “This is a good source of birds, however sad it is. It’s very useful if you have things like the Lights Out program to voucher which birds are being killed, instead of just having them identified by amateur people that are picking them up.”

But it’s going to take a village. The Jacksonville Zoo, the Duval Audubon Society, the St Johns County Audubon Society and the Florida Museum of Natural History are all collaborating on this project.

Mike Taylor, curator of Herps, Birds and Others at the Jacksonville Zoo, is proud of how all four organizations have worked together.

“Everybody comes together, and we have a common goal…and that’s helping save birds,” Taylor said. “Everybody is on board.”

Taylor said the partnership with the Florida Museum of Natural History has been key to accomplishing these goals.

“It’s been really good working with the museum,” Taylor said. “They’ve been really helpful in helping us out with what we needed and giving us some advice in taking and cataloging the birds.”

Another organization that plays a key role in the project is the Duval Audubon Society. It organizes volunteers to walk around downtown Jacksonville and find dead birds. Carol Bailey-White, president, usually goes out with a partner once a week on Thursday mornings to search for birds in downtown Jacksonville.

“We have a route that we have determined is the best way for us to walk around all these buildings,” Bailey-White said. “It usually takes about an hour to an hour and a half to walk the whole route.”

Bailey-White said she is impressed by the volunteers’ dedication.

“A lot of these people work full time, and they will go before their work day. It’s remarkable the dedication of these volunteers…they’re spectacular,” she said.

Taylor said the volunteers are already on track to find more birds this season than they did in the spring, which means more birds for the Florida Museum of Natural History to add to its research collection. According to Taylor, “there are more birds migrating, as the young from the breeding season are joining their parents on the migration.”

The Jacksonville Zoo has cataloged a total of 20 carcasses since the fall project started Sept. 16. Volunteers will continue looking for birds through the middle of November.

As for the future of the Lights Out Northeast Florida project, Taylor hopes that in five years more buildings will participate in the initiative.

“I would like to see a list of buildings committed to turning their lights off,” Taylor said. “Hopefully, we could at least have 20 or more buildings on that list.”

Kratter hopes this project will not only create an incentive for businesses to turn off their lights but continue to raise awareness on bird populations that are undergoing a crisis.

“Many of these migrants are dropping dramatically and it’s important that we know as much about them as possible,” Kratter said. “The Lights Out project can help us understand a little bit more about their migration, and hopefully give us a little bit more to protect them. That’s the overall reason for all of this…is to help these bird populations which are decreasing.”

Kratter also said that the project provides key data on status and distribution of migrants in time and space.

“We may find that a particular species migrates in high numbers in late April along the immediate Atlantic coast of Florida. Such data is indispensable for determining conservation strategies,” Kratter said. “Turning out lights in skyscrapers during high migration periods may be one important step to curtail population declines in this species.”

Ophelie is a reporter for WUFT News who can be reached by calling 352-392-6397 or emailing news@wuft.org.
Previous The Point, Oct. 4, 2021: Legal experts say Florida’s new social media law is likely unconstitutional
Next Florida Not One More holds a pedestrian safety roundtable