Gainesville city employees are fighting back with a lawsuit against the city after officials imposed a vaccine mandate or risk termination.

On Aug. 5, Gainesville City Commissioners voted 4 to 3 in favor of a vaccine mandate which requires all city employees to be vaccinated for COVID-19 and show proof of vaccination by Oct. 1 or risk losing their employment.

City Commissioner Adrian Hayes-Santos voted in favor of the mandate as he believes the vaccine rate in Gainesville needs to rise considerably.

Gainesville resides in Alachua County which reported 56.5% of its total population vaccinated as of Sept. 4.

“I voted in favor of a vaccine mandate to ensure that we have a safe workplace and that the public interactions with our people who work for the city as well are safer too,” Hayes-Santos said.

City Commissioner Harvey Ward voted against the mandate. He did not believe that the city was prepared as an organization and had done the necessary logistical work upfront to impose the mandate so quickly.

Hayes-Santos said the city is hosting webinars and workshops with the top infectious disease experts at North Florida Regional Medical Center and UF Health Shands Hospital to educate and ensure employees of the vaccine’s safety.

All city employees were required to report on their vaccination status by Sept. 7. 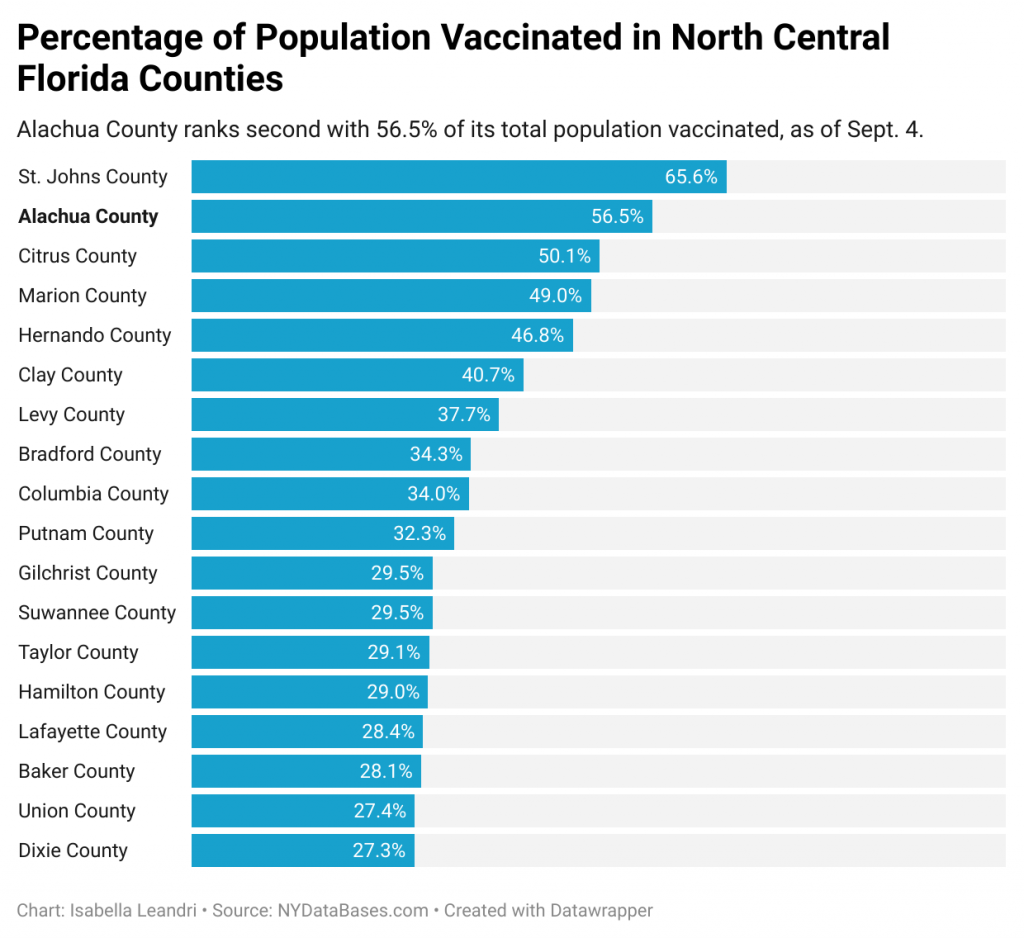 The employee lawsuit against the city of Gainesville was filed on Aug. 26. Lead attorney Jeff Childers of Childers Law, LLC, filed the suit on behalf of the 200 plus city employees acting as the plaintiffs.

The lawsuit calls for a temporary and permanent injunctive relief of the vaccine mandate challenging its constitutionality. It also notes how the mandate is in violation of Florida’s statewide ban on vaccination passports, which prohibits government agencies from requiring citizens to show proof of vaccination to enter facilities.

“One of the things that we asked for in our press conference last week was for the city to put a temporary pause on the policy so that we could negotiate a compromise with them,” Childers said.

Austin Bush, a firefighter EMT at Gainesville Fire Rescue, is one of the employees who has signed on to the lawsuit.

“No one really saw it coming, so it kind of put people on edge like what’s going on in the city now where they are just throwing this at us and not even talking with us,” Bush said.

Bush is not vaccinated but said he is not against it; he was just hoping to wait and discuss it further.

The call for vaccine mandates extends beyond the City of Gainesville.

The nearby city of Tampa has also recently mandated vaccines for all city employees. Employees must show proof of vaccination by Sept. 30 or show proof of having COVID-19 antibodies. Tampa city employees who choose not to get vaccinated must wear an N-95 mask and be COVID-19 tested weekly.

On the national front, The Associated Press has reported that President Biden unveiled an action plan on Sept. 9 to mandate vaccines for all federal employees and contractors in addition to certain healthcare workers. It also calls for private employers with 100 or more workers to require vaccinations or be tested weekly.

A hearing for the lawsuit against the City of Gainesville is set to take place on Sept. 20 at 1 p.m. via Zoom.

Isabella is a reporter for WUFT News who can be reached by calling 352-392-6397 or emailing news@wuft.org.
Previous The Point, Sept. 13, 2021: The Story Of One Family Caught Up In The Alachua County School Mask Fight
Next Gainesville City Manager Lee Feldman Resigns