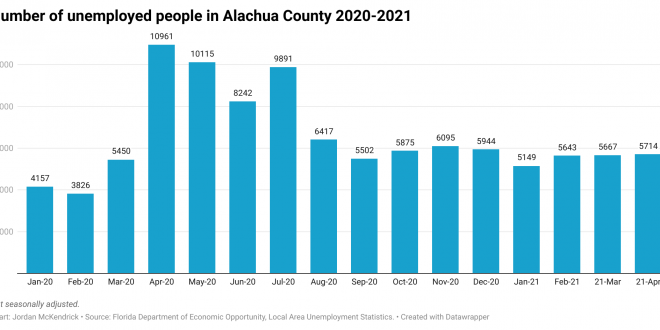 People lined out the door at Maple Street Biscuit Company for a typical Sunday brunch, but it took longer than usual this time. Without enough staff members to run the kitchen, cash registers and to bus tables, the franchise in Butler Plaza struggles while also trying to satisfy their customers with fresh, warm biscuits.

Driving down Archer or Newberry roads in Gainesville, you’re guaranteed to spot a business hiring. Positions are unfilled in not just Alachua County, but all across the country, and employees are finding ways to make it work despite the shortages.

Jason Hurst, the Gainesville charter store owner at Maple Street Biscuit Company, said his business is no exception. He has cross-trained employees so they can give each other a hand when needed.

“We’re certainly feeling that same pressure, we’re understaffed as well,” Hurst said. “But it’s an opportunity for us to really show who we are. One of our pillars for Maple Street is gracious service. We’ve had to be very gracious in serving people that, you know, providing them with extra biscuits, while they’re waiting, be very communicative. People have been surprisingly very understanding and they understand what’s going on in the general market.”

According to the Florida Department of Economic Opportunity, the number of unemployed people in Alachua County is still higher than it was pre-pandemic.

Robert Ainsworth, assistant professor of economics at the University of Florida, believes that this is not a long-term worker shortage, but a short-term hiccup as industries who were shut down last year turn back on.

“I believe that service workers are exhausted,” Ainsworth said. “They had to put up with health risks and unruly customers throughout the pandemic. As a result, the industry is less attractive and fewer people want to work in it. Over time, once Covid is well behind us, the industry will recover. However, it may have to pay slightly higher wages.”

Some businesses are so desperate for workers, they are hiring on the spot or offering extra benefits for people who apply right now.

Hurst said he offered an automatic raise for his existing employees who stuck around during these challenging times.

Hurst isn’t the only employer asking employees to do more. For LaVaris Lanier, who works as a busser at Harry’s Seafood Bar & Grill, said he has also had to step into other roles to help his coworkers.

“Sometimes our duties and responsibilities overlap,” Lanier said. “Sometimes I take the role of a server. If somebody is busy with another customer, their customers might need silverware or drinks. We all want our customers to have a good experience. Everybody’s been in that position where they sit in that seat, and they want to receive good service. But [being short staffed,] we can’t do what we would like to do.”

The summer is also a time when businesses in Gainesville experience some turnover because of students quitting after graduation or to go home for the summer.

Concord Coffee sits directly across from UF campus, and it typically sees a large decrease in sales during the summer, especially during the pandemic. Daniel Fischer, general manager of the Gainesville location, said he takes advantage of this downtime to do things he would not be able to do during busier times.

“We just went through a hiring phase, we boarded two new people,” Fischer said. “We lost some people to graduation and to other summer opportunities.  I like to use this time to hire, make any big changes, try out new things on the menu while it’s slower, try out procedural changes that might be easier to make while you’re not constantly busy. Because if you’re constantly busy behind and you’re the main barista, you’re not going to have as much time to do all these new things.”

Although summer may not be the best time for Concord financially, there is still a lot of progress that can be made and allows the new baristas to be thoroughly trained.

“It’s been a stressful year for anyone who’s had to work in food service,” Fischer said. “It’s just been a mess. So it allows us to breathe, to recharge, maybe do some things we wouldn’t have done otherwise. It’s been nice to have the new hires getting good practice and while it’s not stupid busy. I would rather them have to learn what they need to learn now and establish good fundamentals, than just have to train them while there’s a rush.”

As COVID-19 vaccination rates increase and infection rates decrease, more people have been eating out and attending summer events in town. Hurst said Maple Street Biscuit Company has seen a record amount of sales this year compared to previous summers. Although there aren’t as many students in town, it is located near I-75 where people can stop and get a bite to eat.

“Typically, there’s about a 30% dip in sales during this time when the students leave,” Hurst said. “But I think between people just wanting to get out post pandemic and wanting to be with friends and family again, we’ve actually seen record sales during this time, which is awesome for us. It’s still relatively lower than our normal sales when the students aren’t here.”

Megan Yaeger, general manager at the Holiday Inn and Suites in Alachua, says the hotel occupancy during the weekdays has increased to 100%. With a limited staff, they are not able to provide customers with its typical service.

“A normal check in time was 3 p.m.,” Yaeger said. “However, we can’t turn over as fast as we used to because we have less people. Now it’s just more demanding so it’s harder on the people that do want to work, it’s harder on the guests that want to stay with us.”

Although Yaeger is receiving many applications, only a few of the applicants show up for the interview. Yaeger hopes to bring more people on staff so the current employees can feel some relief and so they can go back to providing proper customer service.

“I would love to allow each one of my employees to have two days off consecutively in a week,” Yaeger said. “Some of them have been shining stars and working six and seven days a week. One, to help the hotel out but it financially helps them. With our short staff we try our hardest, but being able to get back to a normal routine where they have that luxury of maybe having an early check in or even a later checkout that we haven’t been able to accommodate for a better experience.”

The ceremony was made possible by the Greater Gainesville Chamber. The business advocacy group hosted two ribbon cutting ceremonies on Thursday.