Minde Prince Reinhart woke up at 6:30 a.m., cooked breakfast and watched SportsCenter with her sons every day.

“I’m so happy that I put my phone down all the time and didn’t return texts and emails,” she said. “Put your phones down. All that’s going to be there. Your kids? You never know.”

Authorities say the boys were killed by their father, 46-year-old Paul Reinhart, on May 4 before he set fire to their Dixie County home and killed himself.

Those in the crowd showed their solidarity in their attire. Teammates, opponents and baseball enthusiasts dressed in team shirts and hats. Supporters and mourners donned navy blue shirts branded with “Play like Brody, Pitch like Rex” on the front and a baseball with angel wings with the boys’ numbers, #4 and #9, on the back.

Tributes from the boys’ mother, coaches, neighbors, teammates and friends offered a glimpse into their personalities. Highlight reels showed them playing baseball, working out and acting mischievously — dancing around in the living room, jumping into lakes and boxing outdoors.

Rex was an eighth-grader at Kanapaha Middle School and pitcher for the Florida Heat team, based in Tampa. He stood tall and confident on the mound despite his calm demeanor.

But a few things about him stood out to Florida Heat coach and former MLB player Gary Sheffield: Rex’s signature white vans, his bright eyes and flowy, curly hair. And as he got to know him, his character.

“I’m going to cherish these moments for the rest of my life,” Sheffield said. “Because this is why I coach. Because of two kids like that, that you make an impression on, and you can change their lives for the better.”

Brody was a fifth-grader at Lawton Chiles Elementary School and played baseball for Gatorball Academy. Founder and coach Stephen Barton said Brody’s energy and drive on the field was unparalleled, and he never backed down from any challenge.

“We need to figure out how to pitch like Rex and play like Brody forever,” Barton said. “Rex and Brody didn’t know they were playing their last game. We owe it to them to keep our memories in us and play for them every time we take the field.”

The boys freely stumbled into former Gators football coach Will Muschamp’s home in his three years as their neighbor. His home had an open backdoor policy, and they were welcome whenever they wanted.

The teary-eyed audience burst into laughter as Muschamp recounted a time 5-year-old Brody waddled into his home.

Muschamp wasn’t home, but his parents were. Brody walked in with no introduction, grabbed a bag of Cheetos from the top shelf, dropped a ton of chip bags in the process and walked out, only blurting out a goodbye.

When Muschamp returned home, a trail of Cheetos traced from his driveway to their house across the street. But on the way out, Brody didn’t shut the door. Muschamp confronted him about the open door, and he simply responded: “Can you move the Cheetos down a little bit?”

Throughout the night, the audience cycled through laughter, smiles and tears. But the sense of community overwhelmed the ballpark.

Reisha Brown, a 37-year-old mother to a Florida Hardballers player, met the family through travel baseball. The community is tight-knit because families bounce from city to city to watch their sons play baseball.

“We felt her pain and wanted to support her,” Brown said.

Tears swelled in Tracy Diggs’ eyes as she held her baby close in her arms. From ages 10 to 13, the 44-year-old’s son played with Rex on the Florida Elite. She vividly remembers boys’ love for the game.

“She [Minde] couldn’t have honored them in a better way,” she said.

After the audience swayed to Take Me Out to the Ballgame, seats emptied and the crowd dwindled.

The boys’ teammates huddled on the field and took their last photo with their friends’ jerseys — now neatly laid out in a glass case to be memorialized.

Grethel is a reporter for WUFT News who can be reached by calling 352-392-6397 or emailing news@wuft.org.
Previous Untold Florida: What’s The History Of The Tenant Houses In Shiloh Near Micanopy?
Next The Point, May 18, 2021: Demand Surge Didn’t Cause A Gas Price Spike In Florida 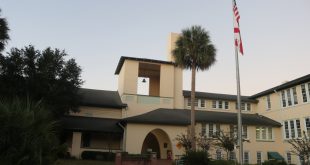 A pedestrian accident occurred close to the University of Florida’s campus. It left sophomore Calhoun …