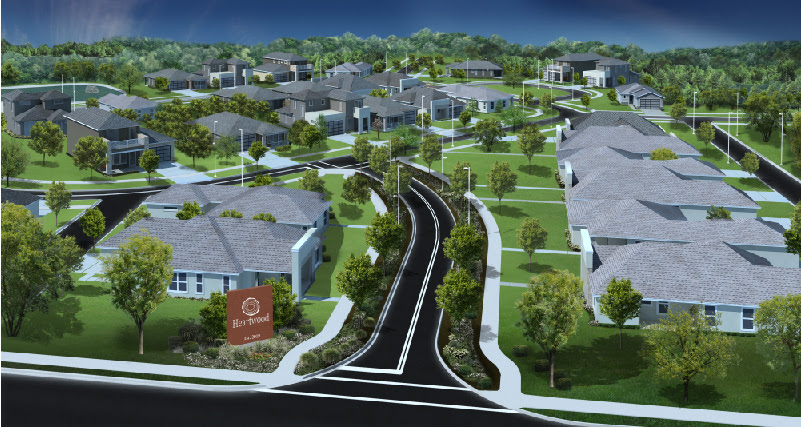 The term 'Heartwood' is the harder part of a tree that is more durable and provides the strength and support for the tree to grow tall. (Courtesy of the GCRA)

Heartwood Neighborhood Is Ready For Residents. Here’s How To Apply

A symbol of growth and a catalyst for more investment in the area was the vision for the Heartwood neighborhood in East Gainesville.

Almost 10 years later, the houses in Heartwood are buyer-ready and will go on sale at noon on Wednesday, June 30.

The idea of Heartwood was created when the city purchased the property back in 2007 and tasked the Gainesville Community Reinvestment Area (GCRA) with redeveloping the site.

Over time, the GCRA established that there was a need for affordable housing and investments in the area. The Heartwood site was the former Kennedy Homes housing development, which burned in 2003 and left dozens of people homeless.

“East Gainesville is the area of our city that needs the most attention, the most economic development,” Gainesville City Commissioner David Arreola said.

Heartwood has 34 homes total, but each will be built as buyers line up — instead of all at once, said Daniel Gil, project manager of Heartwood.

The first of the 34 homes was completed in March.

For affordability purposes, 11 of the 34 lots are available to qualifiers with Dreams2Reality financing, a program created specifically for Heartwood.

More emphasis on affordability means these homes are move-in ready with no renovations needed.

“A lot of people can’t afford the house and then the repairs afterward,” said Heather Swanson, president of the Alachua County Association of Realtor.

Applications for the Dreams2Reality program open on June 30 and run through July 14.

Heartwood is located at 1717 SE 8th Ave. The Kennedy Homes was a historically Black housing complex destroyed by fires in the 2000s. Heritage trees cover the Heartwood area and are protected by city regulations because of the historical significance to the neighborhood.

The neighborhood is accessible to I-75 via Williston Road and is located one mile from downtown Gainesville and about three miles from the University of Florida.

Heartwood has a lot of potential for the community. Gil, project manager, said residents of Heartwood will receive instant equity when moving in.

“We want to be able to have opportunities for everyone,” Swanson said. “We want everyone to have the opportunity to purchase a home.”

Around 5,000 people are currently on the waiting list for public housing assistance in Gainesville. Heartwood is prepared to give some relief to those people.

Those interested in purchasing a Heartwood home can do the following:

Jessica is a reporter for WUFT News who can be reached by calling 352-392-6397 or emailing news@wuft.org.
Previous The Point, May 18, 2021: Demand Surge Didn’t Cause A Gas Price Spike In Florida
Next A Bill Limiting Youth Solitary Confinement In Florida Failed This Year. Here’s What The Practice Entails