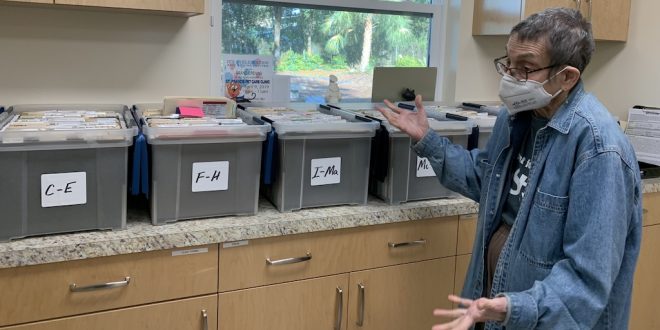 Before the day begins at St. Francis Pet Care, Kathryn Williams has already performed myriad chores. She makes sure the clinic is ready to take the temperatures of all those who will walk in on this day. If the porch outside needs a quick sweep, she’s on it.

The veterinary doctors begin to arrive. Soon, pet owners will line the outside of the clinic geared to people who might not be able to afford a visit to the vet. Their faces light up when they see Williams. Or “Kitty” as she is known.

At 75, she stands just about five-feet-tall. She’s slim and wears her hair in a buzz cut. She shuffles around, trying her best to stay out of everyone’s way. She loves animals and is a mother to two cats herself. Chris and Dash.

“I have to get that,” she says when the phone rings.

After a storied career in chemistry, Williams has found love a second time around. She spends her retirement as a volunteer, working just as many hours and refusing to be paid for it. She doesn’t need to work to live; she lives to work.

Williams recently completed a veterinary technology program through City College in Gainesville. She hopes to take the certification exam to become a veterinary technician and be more active at the clinic. In her program, Williams assisted in spay and neuter surgeries at the Humane Society and helped recover the animals as they came out of anesthesia. She sits with the male dogs coming out of a haze, serenaded by their woeful whines.

Her time now is spent on administrative work. Like a runaway freight train, she answers phones, files medical records of the patients and clicks away on the computer.

“Not that I’m very good at computers,” she said.

While Williams shies away from the spotlight, she does not go unnoticed. Sarah Wingfield, office manager at St. Francis, said Williams’ mind is like a steel trap of information, always reliable and there when something is needed.

Williams grew up in upstate New York and received her undergraduate degree from Bard College. She attended Florida State University for her graduate program and received her Ph.D. in inorganic chemistry. Williams laughs as she recalls how leaving the cold weather was a big motivation to move to Florida. She taught chemistry courses at Florida International University and the University of Florida before she retired. Her sons Matthew and Nathan were raised in Gainesville before she and her husband divorced.

Nathan Williams said his mother always expected him and his brother to do their best and treat people with respect. She could be very matter of fact, but it was important she taught her sons empathy and compassion.

“Something my mom always made sure I did was write thank-you letters,” he said. “Something that meant a lot to her was showing you were grateful and appreciative.”

Despite her retirement, Williams continues to return and teach courses at UF from time to time. This summer, she will lead a physical chemistry course for the Summer B term.

Williams started her undergraduate journey as a math major. It didn’t last long. She refused to be sedentary and chose lab work over a sit-down job.

As a professor, Williams taught and designed experiments for students in some of the chemistry laboratories. John Bowden, an assistant professor in the college of medicine at UF with a joint appointment in chemistry, reflects fondly on his time both as an undergraduate student and graduate teaching assistant under Williams. They met around 20 years ago, and Bowden still considers her a friend.

The educator challenged her students and teaching assistants greatly. She expected them to prepare for labs, read the proper materials and be on time.

Bowden said despite her intensity, Williams’ office was a revolving door for helping those in need; she never complained.

“At her core, the biggest thing she imparted to me is trying to be a person to help improve others,” he said. “I feel like that was her lasting legacy. In terms of having an influence on my career, she was one of those defining individuals who kind of set that path for I think who I am now.”

Inside her office, Williams diligently assisted students with chemistry stress and struggles. Outside her office, she kept two parakeets – Bluebell, the blue parakeet and Tinkerbell, the white one. People walked through the hallway, greeted by the colorful creatures.

“It was amazing to me how these animals were making the place more human,” she said.

Around 1 p.m., Williams says goodbye to her people at St. Francis and heads over to Habitat for Humanity ReStore to begin her second volunteer venture for the day. Here, she will spend several hours pricing and organizing the book section. People bring items to donate, and when they are resold, the money goes toward Habitat for Humanity’s housing projects. Williams has volunteered with them for several years.

In the back corner of the store sits Williams’ book nook. Williams is a bashful artist, silently proud of the setup she created. The books are usually priced below $1, and she organizes them into sections: Spirituality, Foreign Language, True Stories and Memoirs, Health. Her most recent battle, the treacherous weight loss books people donate. She seems to contemplate how useful they are.

“They buy all those things, and I don’t know what they do with them,” she said.

Cherie Baker, a sales associate at Habitat for Humanity ReStore, said Williams is the best volunteer the place has ever had.

“She comes in here, and it looks like a library back there,” Baker said. “She works here and donates so many hours and stuff; she’s just amazing.”

In the free time she has, Williams runs a small editing business. Mostly, she reads science journal articles and works with international students from China. She avoids dissertations as much as possible, because they’re a drag. She works out daily, attends the United Church of Gainesville on weekends and likes watching “the oldies” like Perry Mason on Channel 117.

Williams eagerly tries new things, except of course for her Revlon Hot Coral Crème [No. 712] lipstick she’s slathered on since high school. She carries it around with her, but it doesn’t get much use these days hidden under her mask. While she was at UF, she took some random courses like feature writing, radio and TV and reactor operations. Just for fun. Williams expects to take more courses in the future, because she likes to keep her brain active. In the meantime, she wants to volunteer as long as she can.

The phone rings again at St. Francis, and Williams is a soldier who assumes her position: “St. Francis Pet Care, this is Kathryn. May I help you?”

The answer is probably yes.

Addison is a reporter for WUFT News who can be reached by calling 352-392-6397 or emailing news@wuft.org.
Previous Music Comes Alive Again for the UF Concert Band Members
Next Barstool Sports Founder Dave Portnoy Unapologetic During UF Speaking Engagement