TALLAHASSEE — As Florida officials ramped up vaccinations against the coronavirus, concern spread Tuesday over a new, more contagious variant that could be gaining a foothold in the state.

The federal Centers for Disease Control and Prevention said Florida had 46 confirmed cases of the more transmissible strain of COVID-19 as of Sunday, eclipsing California with 40 confirmed cases at last count. The strain was first detected in the United Kingdom in December and has begun spreading globally.

Early evidence seems to indicate the new strain is no more lethal than earlier strains that sickened nearly 24.2 million in the U.S. and killed more than 400,000. Florida is now approaching 1.6 million confirmed cases, with nearly 10,000 new cases and about 160 additional deaths reported Tuesday. To date, the state has reported more than 24,400 virus-related deaths.

“This new strain is more contagious, and that means more people will get infected,” said Dr. Frederick Southwick, a professor of medicine and a specialist in infectious diseases at the University of Florida. “If we had a problem, we’re going to have more of a problem now.”

Also Tuesday, the mayor of Miami-Dade County, Daniella Levine Cava, asked residents to light a candle and ring bells to join President-elect Joe Biden on the eve of his inauguration to remember the dead. The mayor said buildings would be lit in a light amber color around the county.

Edward Mena, 30, of Miami, lit a candle on his balcony Tuesday evening and posted a photo on Twitter.

“My dad passed away five months ago as a victim of the virus,” Mena told The Associated Press. “I wanted to remember him today with a candle. I got very emotional, and I’m very thankful that the new administration is doing this to remember the lives of the victims.”

The Florida Capitol also was expected to glow in amber Tuesday evening, at the request of Agriculture Commissioner Nikki Fried, the only Florida Democrat in statewide office.

At a news conference in Palm Beach County on Tuesday, Gov. Ron DeSantis said he wanted more Floridians vaccinated but the state was constrained by limited vaccine supplies of the federal government.

So far, some 700,000 senior citizens have received at least one dose of the COVID-19 vaccine, he said. DeSantis has prioritized seniors 65 years or older for vaccinations. In all, nearly 1.1 million shots have been administered in Florida, state officials said.

Publix is using 242 of its pharmacies across 18 counties to administer as many as 125 shots per day. DeSantis said 67 of the grocer’s stores in Palm Beach County – the largest Florida county to take part in the program – would begin offering vaccinations by appointment. A fourth of the county’s residents are 65 or older.

Meanwhile, Baptist Health South Florida announced in a statement Tuesday that it was suspending all first-dose vaccinations because of limited supplies. Any appointments booked for Wednesday or later were canceled. Second-dose appointments were not affected.

Communities across the country are racing against the rise in infections as they await more doses of two vaccines approved for use against the virus.

“The game plan is what it has been before: Vaccinate as many people as possible, as rapidly as possible, try to really stomp on this virus and drop the overall number of cases, hospitalizations and deaths,” said Dr. Glenn Morris, director of the Emerging Pathogens Institute at the University of Florida.

The number of hospitalizations in Florida appeared to be leveling off in recent days, with 7,367 people in Florida being treated for COVID-19.

“As a scientist, I’m concerned that we monitor the inevitable evolution within these strains,” said Morris, who echoed concerns among researchers that not enough resources have been invested in identifying the strains spreading around the country.

“At this point, we don’t have enough data to get to the point where we need to be alarmed,” Morris said, adding it was uncertain how widely new strains would spread.

The concern is that more transmissible strains will sicken even more people, further pressuring hospitals and resulting in more deaths.

A bipartisan group of Florida’s congressional delegation received a briefing Tuesday evening from Director of Emergency Management Jared Moskowitz to address the timeline for getting vaccinations.

U.S. Rep. Stephanie Murphy told reporters afterward that she was concerned that Florida lacked a comprehensive and coherent plan for administering the vaccine. The Orlando-area Democrat said the state lacks a centralized system, creating confusion for Floridians. She said the state is looking to hire a third-party tech vendor to help centralize the process, but getting enough vaccine remains an issue.

The Associated Press is a wire service to which WUFT News subscribes.
Previous ‘This Is America’s Day’: Biden’s Inaugural Address, Annotated
Next The Point, Jan. 20, 2021: How To Watch NPR’s Feed Of Today’s Presidential Inauguration 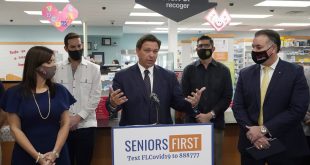 UF Health surgeons have successfully performed over ten lung transplants on COVID-19 patients throughout the past year.