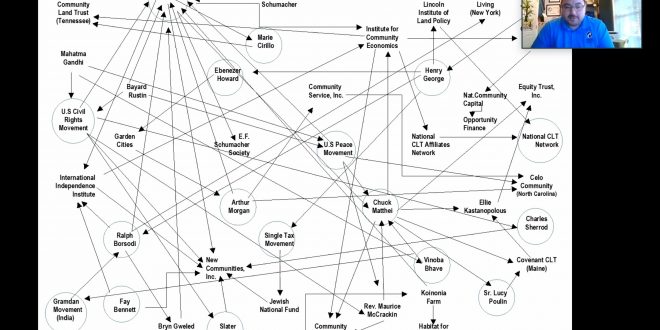 Jason Webb presents the history and evolution of community land trusts to the board. (City of Gainesville Zoom screenshot)

The Gainesville Community Reinvestment Area board this week discussed establishing a community land trust agreement that could benefit residents with lasting affordable housing.

The idea, though, did cause some concern among board members.

Jason Webb, a community building expert whose specialty is in organizing land trusts, presented the plan to the board at a virtual meeting Tuesday night.

The organization for which Webb works, Grounded Solutions Network, is a nonprofit that connects local experts with sources, knowledge and support that communities need and to promote housing solutions with lasting affordability.

Here’s how it works: A land trust provides affordable housing, commercial spaces, community spaces, farms, and open space. In return, its managers acquire, own and steward the land.

Land and housing prices are lowered initially, with a subsequent decrease at resale by controlling the appreciation that a homeowner can take away from a property.

“As the years go on, we’ve just seen affordability continue to be more and more out of hand for a number of homeowners. It’s far out of their reach at this point,” Webb said. “We are the ones that the homeowner can always turn to. If they have questions, if they’ve run into financial difficulties, the community land trust is there.”

Affordability was the least of the Gainesville board’s concerns.

Chief among them were an increase in violence in certain areas, what costs and preconditions are required for property ownership, subsidy and equity, and if this ultimately prevents people from gaining wealth — specifically those in minority groups.

One member, Michael Palmer, explained that he lives in an area where crime is on the rise, and wondered if the land trusts would increase that.

Webb responded: “You speak to the neighbors and you speak to the folks that are living there, and you give them an opportunity to collectively start owning what’s happening in their own community and start making decisions on where their community should go.”

Board member Carrie Bush expressed her concern about preconditions:

“I would say that one of the things that you need is a community that’s ready to work,” Webb said.

The next concern was regarding subsidy and the equity that a homeowner can get from resale.

“The amount of the subsidy that comes out of their equity is a bit concerning to me,” board member Warren Nielsen said.

He is concerned that a person or family that is living in a land trust home and has invested in it will get hurt by the subsidy.

Webb explained that the resale formula is equivalent to the appreciation that somebody would earn on their home. Homeowners get 100% of their equity.

A land trust is not targeted for normal homebuyers, but rather those who can’t afford one on the traditional housing market.

“This is a motto that gives folks the entryway into the real estate market. And we have studies that show that individuals do make money,” Webb said.

He acknowledged that the model upsets traditional real estate.

One last concern was delivered by board member Armando R. Grundy-Gomes. He addressed the dilemma of solving poverty and affordability, and how the plan affects African American home buyers.

“The ability for African Americans to build wealth in this country has been the biggest dilemma and biggest problem in this country, building wealth,” Grundy-Gomes said. “If you buy a home and you buy land … you’re an owner.”

He continued by asking where the plan is to help people, when they get into these homes, on their path to independence and empowerment, and not just staying stuck in a place of poverty.

Webb explained that regarding wealth, one of the biggest stresses that he has seen throughout his career is that too many people do not know if they are going to be in the location where they’re living in a year or two.

Jessica is a reporter for WUFT News who can be reached by calling 352-392-6397 or emailing news@wuft.org.
Previous Florida Says It Will Give More Scrutiny To COVID-19 Deaths
Next High Springs To Use Taxes To Sue Alachua County Over Ballot Amendment