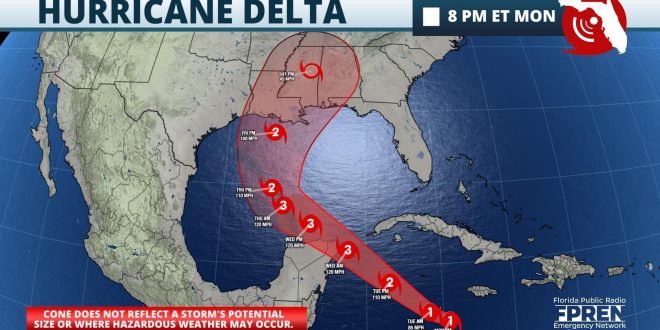 Delta strengthened into a Category 1 hurricane late Monday evening with maximum sustained wind speeds of 75 mph. Delta is expected to strengthen further and possibly become a major hurricane in the next day or two.

The 8 p.m. advisory from the National Hurricane Center Monday placed Hurricane Delta 150 miles to the south-southwest of Negril, Jamaica with a slow forward speed of 8 mph to the west-northwest.

Forward speed is expected to increase Tuesday through Wednesday night with the center of Delta forecast to pass southwest of the Cayman Islands Tuesday, and approach the Yucatán Peninsula Tuesday afternoon or evening, possibly as a major Category 3 hurricane. Thereafter, the system is expected to enter into the southern Gulf of Mexico Tuesday night or early Wednesday.

Delta is forecast to approach the northern Gulf Coast late this week as a hurricane. While there is still a large amount of uncertainty in the track and intensity of the system, the National Hurricane Center notes that there is an increasing risk of dangerous storm surge, wind, and rainfall hazards along the Gulf coastlines from Louisiana to the western Florida Panhandle. Gulf Coast residents are advised to start preparing ahead of Delta and have their hurricane plan in place and monitor updates to the forecast.

If Delta impacts the coast of the United States it will be the 10th system to make landfall in the country this year. The record is currently tied with the 1916 Hurricane Season which had nine landfalls.

Dr. Athena Masson is a leading hurricane expert and meteorologist originally from Florida who works for the Florida Public Radio Emergency Network. Since surviving Hurricane Andrew in 1992 she has dedicated her life to studying tropical cyclones and other severe weather phenomena.
@@Wx_Goddess
Previous Putnam County Fire Department Accepts $2.3 Million Grant
Next The Point, Oct. 6, 2020: How A Federal Grant Could Help This Rural County’s Fire Department