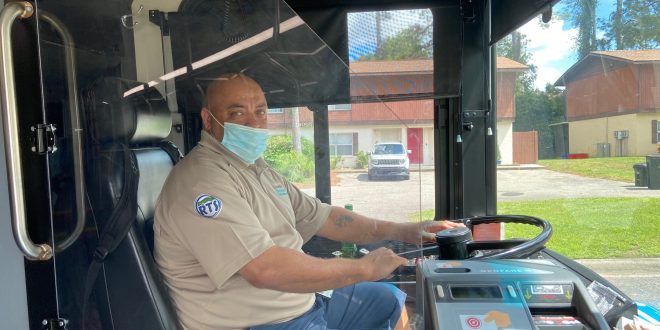 Dwayne Goodrum sits at the wheel of his RTS bus, wearing a mask behind a plexiglass shield. (Nicole Rodriguez/WUFT News)

Dwayne Goodrum starts his drive along Route 34 every Friday morning.

He rides along the Stephen C. O’Connell Center, bumping through the ins and outs of Archer Road, past residential complexes and back to the center of campus.

After a quick break, he starts the trip all over again.

Goodrum has worked for Gainesville’s Regional Transit System (RTS) for nine years, enjoying the conversations he shares with passengers each day. But now, when Goodrum opens the doors of his RTS bus, he wears a mask behind a plexiglass shield and finds few people waiting to get inside.

The start of the fall semester has seen a significant drop in ridership level, Goodrum said, taking away the interactions he savors during work.

“You tend to feel a little lonely here when it’s just you by yourself,” Goodrum said. “It just seems so impersonal.”

While UF Transportation and Parking Services (TAPS) decided to limit capacity on all vehicles in response to COVID-19, TAPS Senior Director Scott Fox said the drop in ridership is likely due to a lack of demand for services. Only 35% of classes this fall are taught in-person or in a hybrid model, so Fox said ridership on RTS buses, Campus Connector Shuttles and SNAP vans has dropped by a third relative to this time last year.

“I think that if the campus population is reduced, then we can expect the demand for transportation to be reduced,” Fox said. “It’s pretty straightforward.”

Additionally, confidence in the transit system has gone down nationwide since the start of the pandemic, Fox said, affecting passenger transportation habits in Gainesville, as well.

Transportation services are supported by a $9.44 per credit hour transportation access fee all students pay for as part of their tuition, he said. But if the fee were to be reduced to account for the drop in ridership, TAPS would need to reevaluate its budget, he said.

For now, some routes with low ridership are circulating with fewer buses. Fox said the university is currently experiencing a hiring pause, but drivers whose routes have been removed remain employed. Instead, they are cleaning buses and wiping down surfaces at the end of each day, he said.

“We have not had to reduce the number of drivers, fortunately,” Fox said. “We hope that we’ll be able to continue to keep them employed.”

According to RTS Marketing and Communications Specialist Thomas Idoyaga, the decision to remove a bus from its route depends on the number of passengers per bus every hour. While the city was not able to provide a clear number indicating the changes in ridership, Idoyaga said the drop was significant enough to remove four buses, each from different routes.

“When the economy is bad, folks ride transit more,” Idoyaga said. “That’s historical. But this isn’t historic. This is uncharted.”

Even with ridership numbers down, the safety of drivers and passengers remains a top priority, Idoyaga said. Passengers are required to practice social distancing and wear masks while onboard and buses are disinfected throughout the day, he said.

“We’re just trying the best we can to make sure everybody is as safe as possible and still provide some kind of service,” Idoyaga said. “It’s been challenging.”

For Savanna Downing, the safety precautions that have been implemented keep her fear of COVID-19 at ease. The 19-year-old UF music junior is required to attend in-person classes every day. She also works on campus twice a week.

“It’s definitely a lot safer than I think it is thought to be,” Downing said. “The mask policy is doing good, and I think most people are following the rules.”

Without the bus, Downing would have to walk three miles from her apartment to campus, she said. But now, catching the bus seems harder than catching the virus.

Downing has never had trouble meeting the bus on time in the past, but fewer passengers has led drivers to rush past less congested bus stops, she said. Over the past few weeks, Downing said, she has often reached her stop to find the bus already miles away.

“The time is just severely inconsistent,” Downing said. “I’m not only working on campus, but I have ensemble rehearsals that I have to be in attendance for and I cannot be late to. Anything that makes me late is not a good thing.”

Although Downing has a car, parking restrictions on campus prevent her from driving to class herself, she said. To guarantee a bus ride to class, she uses her car to drive to an area where buses are more likely to frequent.

“I’m trying that out and it seems to be doing OK,” Downing said. “But it also did require me to have to pay $80 for a parking decal, which I was not happy about, but I’m doing what I can.”

Still, drivers like Goodrum continue to work, looking to provide efficient and safe services to the Gainesville community. Goodrum said for him, it’s important to go into work each day with a simple mindset: treat people how you want to be treated.

“I enjoy what I do,” Goodrum said. “Whether there’s nobody here, or one person, or five people, or 30 people, or 50 people, I’m still going to stay interacting with whoever may be on the bus.”

Nicole is a reporter for WUFT News who can be reached by calling 352-392-6397 or emailing news@wuft.org.
Previous Immigrant Students Foster Their Own Paths In An Education System Designed For Others
Next President Trump And First Lady Test Positive For COVID-19