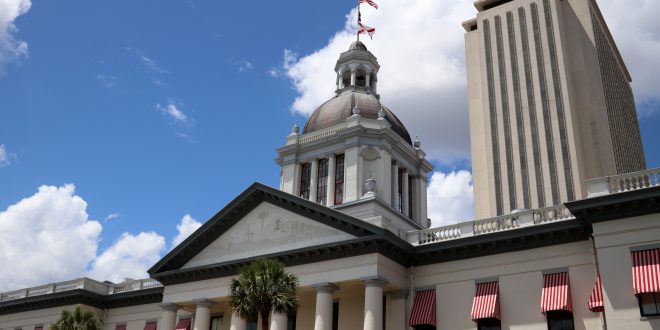 Florida’s Cabinet of top elected leaders met face-to-face Tuesday in the Capitol for the first time in seven months, after concerns about health safety during the pandemic canceled two other in-person meetings earlier this year.

The Cabinet approved resolutions and rules from a number of state boards and agencies, many regarding Hurricane Sally, which flooded Pensacola last week. It also established September as a month to commemorate law enforcement service and sacrifice, and a week in October as fire prevention week.

Just weeks ahead of November’s election, Florida’s top Democrat sat at a distance from her Republican counterparts – including Gov. Ron DeSantis. Agriculture Secretary Nikki Fried had a terse exchange with DeSantis as the two agreed to work on emergency loans to farmers affected by Hurricane Sally.

At the last Cabinet meeting, held as a video conference in May, Fried sharply criticized the governor for failing to meet regularly during the worst of the pandemic so far. DeSantis responded, “Anybody else?” Fried is expected to run against DeSantis in 2022.

Tuesday’s meeting represented the third Cabinet meeting of the year, compared to 14 last year. Fried had asked to discuss using federal stimulus money for nutritional programs in schools, but that was not on Tuesday’s agenda.

In an interview, Fried declined to say whether she will run against the governor.

Fried on Monday spoke with fired Florida Department of Health whistleblower Rebekah Jones, who continues to raise questions about the transparency and credibility of state pandemic data. The governor refused Fried’s request in May to invite Jones to speak to the Cabinet and has criticized her as “chasing the conspiracy bandwagon.” Jones is separately facing misdemeanor cyberstalking charges and is expected in court at the end of the month.