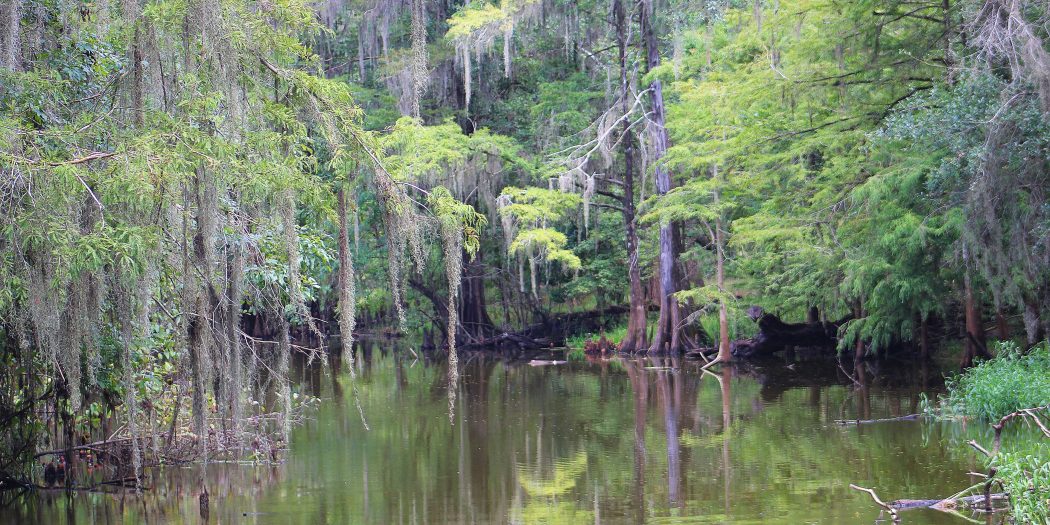 Newnans Lake is lined with Cypress trees that shed debris into the waters every year. (Mariangel Acosta/WUFT News)

“It’s green, and the fish that come out of it have sores on them. You get the water on you, and you start itching. It’s not a good thing.”

Tucked beneath Spanish-moss draped canopies and eight-foot-tall elephant ears, Mike Carter and his wife, Monica, have lived in their home behind the troubled Newnans Lake for over two decades. Their boat rental business, Kate’s Fish Camp, is located on the lake’s south creek. Closed to the general public in March over concerns with sanitizing rental equipment due to COVID-19, the camp is only open to visitors in self-contained recreational vehicles.

“We don’t depend much on the lake anymore because of its poor quality,” said Mike Carter. To make up for lost income from Kate’s, Monica Carter pours her newly free time into her homemade organic soaps.

The nearly 6,000-acre shallow body of fresh water behind the Carters’ home, also known for its earlier Seminole name as Lake Pithlachocco, or the “place of longboats,” faces a cyclical threat in its quest for clear water – excessive nutrient pollution.

In 2016, the project was funded by a state grant administered by the Florida Department of Environmental Protection’s Division of Water Restoration Assistance. The Orange Creek Basin Management Action Plan calls for a 74% reduction in nitrogen and a 59% reduction in phosphorus for the lake to meet clean-up goals.

Williams stated plans for the second half of phase two, set initially to break ground in March 2020, are finally underway and planned for later this month. The second stage of phase two involves the construction of two reactive weirs, a small dam that filters water, to divert the baseflow from Little Hatchet Creek in efforts to remove phosphorus, he said.

According to Williams, the weirs’ construction should be completed within two weeks from the start date. He cites issues obtaining approval for building permits through the Water Management District and the Army Corps of Engineers as a barrier that contributed to the delay.

County spokesperson Mark Sexton also cited “personnel changes within the consulting firm and resulting design changes, a delay with the Army Corp of Engineers permit due to the potential of archeologic resources near the project site, and the unexpected need for an inter-local agreement for the City of Gainesville to be a co-permittee on the Environmental Resource Permit application since the weirs are on city property” as further reasons for the delay.

“Moving forward, plans for phase three would involve looking at the feasibility of different treatment options with some of the internal nutrient recycling, whether it’s a treatment wetland or the rehydration of Gum Root Swamp,” Williams said.

Sexton added that “while there are Department of Health fish advisories for the consumption of some freshwater fish from Newnans Lake, such advisories exist for all large bodies of freshwaters within Alachua County, and most of the state, regardless of nutrient impairment.”

But Mike and Monica Carter are still doubtful of the county’s efforts.

“Without real intervention like dredging, the sediment returns within a season,” said Mike Carter.

“This is some of the nastiest water in the state going into our aquifer where our drinking water is. And they do very little to deter it,” he said.

Despite project milestones achieved to protect the impaired water body, Newnans Lake has a long way to go before it could be officially declared healthy.

“Whether you use the lake for fishing or recreation, it’s an asset to all county citizens. We’re all affected by this,” said Williams.

In the late spring of 2000, Newnans experienced extreme drought conditions that exposed the intact remains of one of the largest collections of prehistoric canoes ever discovered in North America.

The discovery subsequently earned the lake a spot on the National Register of Historic Places. It established Newnans as home to an early mercantile highway of native societies that depended on these waterways to trade, hunt and migrate. Due to the abundance of archeological resources entombed in clay at the bottom of the lake, Williams noted that dredging is not an option.

“The lake is slap full of sediment. It cannot possibly hold anymore,” said Mike Carter. “When the wind blows, it flows out.”

He argues that dealing with sediment content is the only way to restore and preserve the watershed for future generations.

“My children were raised here on these waters,” urged Monica Carter. “This lake is the heart of our aquifer. If we don’t care about it, who will?”

Editor’s note: The initial version of this article said phase two was set to break ground in March 2018, which was corrected to March 2020.

Mari is a reporter for WUFT News who can be reached by calling 352-392-6397 or emailing news@wuft.org.
Previous School Bus Involved In Three-Vehicle Crash, No Students On Board
Next 2021 Spring Arts Festival Canceled Due To COVID-19 Pandemic