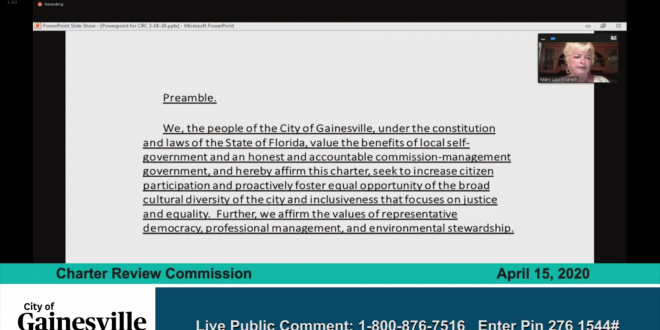 Mary Lou Hildreth discusses the possibility of changing the wording of a proposed preamble to the city charter during the Charter Review Commission's first hearing on Facebook Live. Adding a preamble to the charter is one of 10 proposed amendments.

The Gainesville Charter Review Commission battled a few technical difficulties and removed one proposed amendment during its inaugural hearing on Wednesday.

The Charter Review Commission held the first of three scheduled virtual hearings, with each intended to be open to the public.

“Your input has been and will be key to serving the best interest of our community,” Mary Lou Hildreth, the Commission chair, said in an opening statement.

The commission discussed how some of the proposed amendments, which have been formed over the past year, are going to fare amid the global pandemic.

The public was encouraged to submit comments before the meeting and during it, through phone. About a dozen phone calls were taken during the meeting, with some people calling multiple times to comment on more than one amendment.

The purpose of the hearings is to address 10 potential amendments to the city charter. The first two hearings are meant to provoke discussion and public comments, while the commission intends to vote on whether to move any amendments forward during the third hearing.

Those that pass in these virtual hearings will appear on the November election ballot after the City Commission has a chance to review them. A full list of the proposed amendments can be found on the city website.

The Charter Review Commission formed in May 2019 after Gainesville voters overwhelmingly opted to create it to provide a regularly established process for reviewing and placing charter amendments on the ballot. City commissioner Adrian Hayes-Santos pushed for the commission to be on the ballot in the March 2019 Gainesville elections.

“I wanted to make sure residents from the community had a voice,” Hayes-Santos said.

The city’s charter serves as a governing document, like a constitution, for the municipality, he said. It lays out laws, limits, special powers and more.

The Charter Review Commission is meant to be independent.

The Charter Review Commission is comprised of 11 Gainesville registered voters, appointed from a pool of applicants. It is meant to be a diverse representation of the city. The current members were selected in May 2019.

The virtual hearings are open to the public live via Cox Cable Channel 12, the City of Gainesville website or the city’s Facebook page. The next two meetings will be streamed the next two Thursdays — April 23 and April 30, from 6 to 8 p.m.

Cameron is a reporter for WUFT News who can be reached by calling 352-392-6397 or emailing news@wuft.org.
Previous Coronavirus Evening Update: DeSantis Announces Next Steps Toward Reopening State
Next Elder Options Provides Help To Seniors During COVID-19 Pandemic