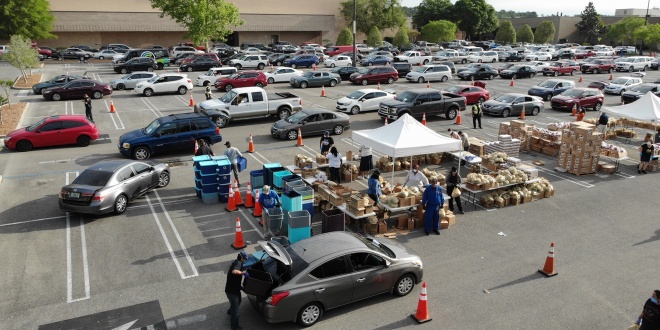 Volunteers pack free food into the trunks of cars, as hundreds of more Alachua residents wait their turn in line at The Oaks Mall. (Photos courtesy of GPD)

By Lexi Flechner and Steven Wolf

With Florida on an executive stay-at-home order and hundreds of thousands of people struggling to obtain their unemployment checks, many Alachua County families are experiencing trouble just putting food on the table.

To help, Farm Share, an organization that supplies fresh food to people in need, partnered with the Alachua County Christian Pastors Association and The Long Foundation to hold a Community Relief Day in Gainesville on Friday. It was their third food giveaway in less than a month.

The first event, on March 25, caused traffic jams around the Martin Luther King Center parking lot, where it took place. In the second event, on Wednesday, volunteers delivered food to the homes of the 800 families who had previously signed up, according to event coordinator and local pastor Gerard Duncan.

The most recent event did not require a sign-up and took place Friday morning in the southwest parking lot of The Oaks Mall, in front of Dillard’s. Food was distributed in a drive-thru style. According to Duncan, more than 1,400 households were supplied with enough produce, fruits, vegetables, protein and dairy products to last them up to two weeks.

Volunteers wore gloves and masks, and had their temperatures checked by Alachua County Emergency Management staff before the start of the event. They placed all food in the trunks of every car, to limit contact.

“It’s important for us as volunteers to exercise social distancing,” Karl Anderson, the president of the pastors’ association, said. 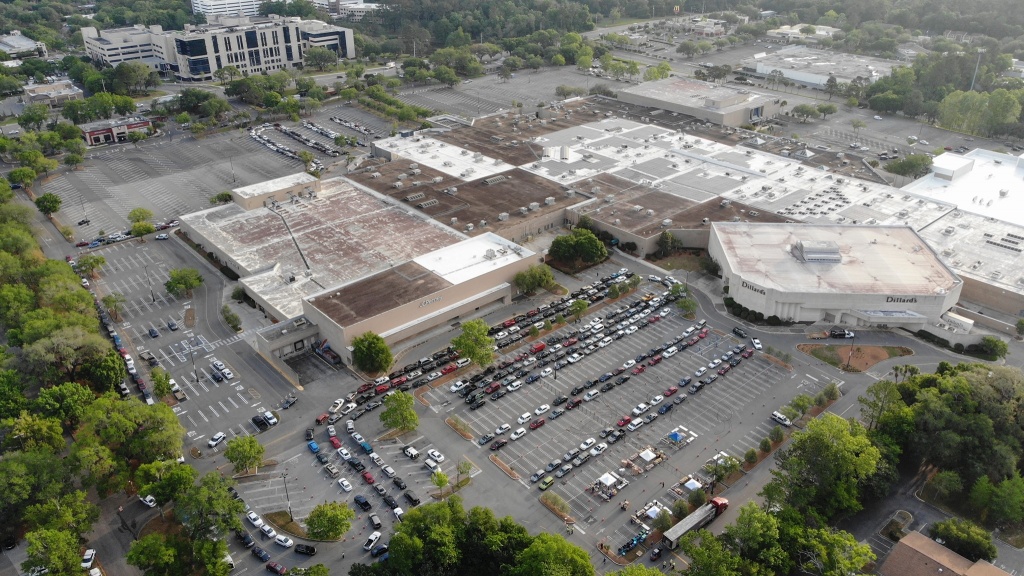 The event started at about 8:45 a.m., but cars began lining up as early as 4 a.m.. Some cars were turned away at the start of the event by law enforcement officers who thought it was at capacity.

Janeen Rowlinson arrived at The Oaks Mall at 8 a.m., only to be turned away. She came back at 8:30 a.m. to the same response.

“By the time I went around and I came back I hardly saw anyone,” Rowlinson said. “All of the line had disappeared but people were still getting turned away.”

It wasn’t until a representative of the event contacted Rowlinson, after she had posted on Facebook about her experience, that she was able to return and get food, at 11:45 a.m..

“They were still handing out food,” she said. “It wasn’t much, but they still did have something,”

Police started turning cars away because they wanted to avoid having people wait in line only to receive no food, according to Duncan. However, they had anticipated more carpooling, which would have required more food for each car. As a result, more people were let in toward the end of the event.

“The Community Relief Day event was really inspired as a result of the food insecurity and high volume of food that would be needed for Gainesville and Alachua County,” Duncan said.

The pastors’ association is planning to hold these events at least twice a month. Anderson said the giveaways may continue after the pandemic is over.

“It’s important to us to still continue to do something for our community even afterwards,” he said. “We’re not stopping.”

Dairy and beef cattle farms produce about 2% of total worldwide greenhouse gas emissions. According to Climate Watch Data, in 2018, 2% accounted for 1 billion tons of greenhouse gas. Alliance uses a system called an anaerobic digester to process their manure. From the outside, it just looks like a large concrete platform covered in metal pipes.