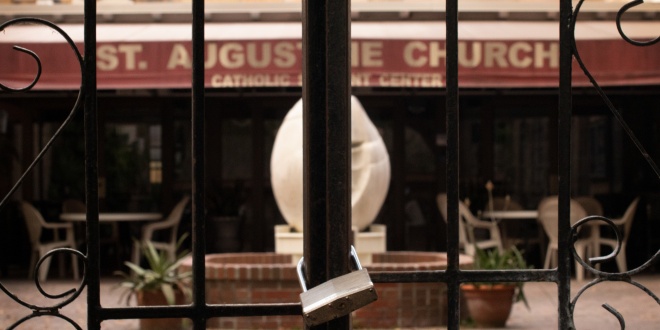 Virus During Holy Week: How The Faithful Are Managing

GAINESVILLE – Christian and Jewish leaders commemorating some of the holiest days in their faiths in coming days – Easter and Passover – are wrestling with decisions of death and life, whether to host in-person religious services during the pandemic. Most are doing so online instead.

In Florida, Republican Gov. Ron DeSantis has shifted his stance on religious gatherings, speaking Monday in support of stricter precautions as these holidays approach. Last week, the governor received backlash from local religious and government leaders after declaring religious services as “essential,” meaning worshippers were exempt from the mandatory, statewide stay-at-home order covering a wide range of other activities. DeSantis encouraged Floridians to remain spiritual, but maintain social distancing.

The coronavirus that has infected more than 1 million people worldwide and killed tens of thousands is also wreaking havoc on the religious economy, frustrating regular financial contributions or tithing to churches, synagogues, mosques and others. It’s hard to drop cash in a collection plate when you’re sitting at home in isolation.

Some religious leaders across Florida said they intend to apply for federal stimulus money to help pay staff salaries – permissible under the U.S. government’s $2.2 trillion emergency aid package but a curious collision of church and state.

Weeks ago, the Rabbinical Council for the North Miami Beach Orthodox Jewish community instructed worshippers not to gather for prayers. In Orthodox Judaism tradition, members congregate in groups of 10 or more, known as minyan within the faith, for public prayers often done three times a day. If it’s not possible to participate in a synagogue, the community can gather in streets and backyards to worship.

The shutdown is unprecedented, said David Silverman, a member of the community for the past eight years. He has been adjusting to pray alone.

“This dual responsibility of homeschooling, while being able to balance work, it’s been tough enough,” he said. “Now you don’t even have that outlet of being able to go to prayer once or twice or even three times a day. So it’s been very, very tough.”

The Florida Catholic community, divided into seven dioceses, has stopped holding regularly scheduled masses as well as parish gatherings through Easter and until further notice. In an effort to strengthen accessibility, services are accessible via live stream, television and radio.

The transition to virtual religious services for the safety of worshippers is causing special problems for the elderly, who may not have reliable internet service or computers, tablets or phones capable of streaming services – or even know how to do this.

Antioch Baptist Church, a megachurch in Miami headed by Pastor Arthur Jackson III, has a congregation exceeding 5,000 split between two campuses. Jackson reassigned a church employee to a new staff position of congregational engagement, since campuses are not in use. The employee helps older members of the congregation access services online or using DVDs or CDs.

Jackson, whose church has a full-time staff, paid with money from contributions, met with his banker to evaluate the church’s options. He said the church will be applying for federal recovery money under the Coronavirus Aid, Relief and Economic Security Act.

About $377 billion set aside in the new law is available for small businesses, which include non-profits with fewer than 500 employees, including religious institutions.

Although the stimulus money would help the church and its employees, Jackson was still encouraging his congregation to support the church using traditional methods.

“It will put the church in a better position to help,” he said. The church has ministries in Haiti, including an orphanage, that is funded by contributions, in addition to charity in the U.S.  “The stronger the church is, the more viable we are to the community.”

This story was produced by Fresh Take Florida, a news service of the University of Florida College of Journalism and Communications. The reporter can be reached at khayes@freshtakeflorida.com

Kelly Hayes previously reported for WUFT News.
@twitter.com/kellyrhayes
Previous How The University of Florida Is Responding To The COVID-19 Pandemic
Next Coronavirus By The Numbers: Cases Climb During Holy Week