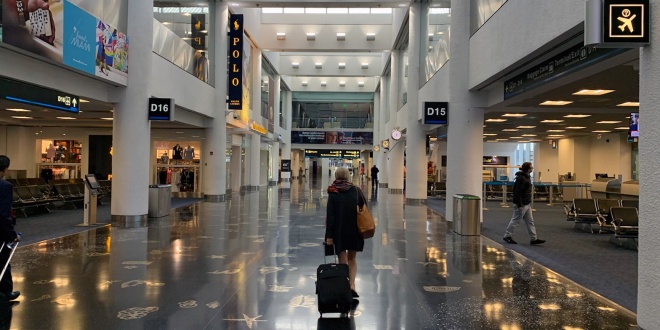 Daniel Farji, 22, was studying in Vicenza, Italy, when the University of Florida told students to immediately return home as the coronavirus spread.

Wearing a mask and gloves, the next thing Farji knew he was boarding a plane February 27 — two days after being told to evacuate — cutting short his senior year participation in the architecture program he had mapped out over a year in advance and waited for since he was a freshman.

The gravity of the situation sunk in for Farji when, he said, he was staring at an empty train station and airport. Milan Malpensa, the once bustling hub for international travel, was now nearly deserted.

“I’m grateful I got to complete at least half of my program,” Farji said. “But so much I wanted to see and do was taken away.”

Universities across the nation have transitioned to online classes and plucked their students from abroad programs.  On March 12, UF canceled spring studies in Europe, China, Japan and South Korea, according to the International Center.

The center’s executive director, Susanne Hill, said 279 students were abroad in the spring and 210 have since returned home.

According to UF’s International Center website, all students who remain abroad after being told to return home “are doing so of their own accord.”

“We know of 39 students that have decided to stay in their host country,” Hill said. “The remaining students are either still considering a possible return or have gone back to their non-U.S. home country.”

Farji said he was shocked at the leniency he witnessed at customs on returning to America.

“They didn’t test my temperature or do any sort of screening,” Farji said. “I was just told ‘welcome home,’ and that was that.”

Returning to Hollywood, Florida, Farji grew worried at the onset of cold-like symptoms he would typically chalk up to allergies.

However, he has since passed the 14-day quarantine mark and shows no signs of COVID-19.

Among the students frantically traveling back to America were Farji, Emily Rothenberg, Gabby Schwartz and Emma Barsky.

When Italy was becoming an epicenter for the coronavirus, Rothenberg, 20, made a quick getaway from Florence where she was studying sociology.

Rothenberg left her program at the insistence of her parents after a Level 3 travel advisory was issued against non-essential travel to Italy.

She said most of her friends continued to travel around Europe, but she was grateful her parents forced her home when they did, as restrictions were tightening and travel would only become increasingly difficult.

Rothenberg also believes leaving Italy sooner rather than later may have reduced her risk of contracting the novel coronavirus, of which she has shown no symptoms.

In Spain, accounting major Schwartz, 21, was taken aback by the 48-hour turnaround between carefree clubbing and flying.

She was out with her friends in Madrid on March 11, dancing and soaking up what they knew would likely be some of their final abroad memories, when President Trump announced a travel ban to European countries.

Unclear at the time on the extent of the ban, Schwartz said parents of students on her program were urgently booking flights for the next morning.

“We did not realize how quickly we would have to pack up and leave our entire lives there,” Schwartz said. “We all started crying, boys and girls, and immediately went home to start packing.”

Schwartz said she was especially frustrated with UF’s lack of communication. She remembers not being given much direction from the school during that 48-hour period, and it was only once she returned home that information regarding her studies became more available.

Like Farji, Schwartz was not subjected to any airport testing on arrival in the U.S. on March 13, which surprised and confused her.

She is now quarantining herself for at least 14 days.

Barsky, 20, was enjoying the sun and her time abroad in Australia studying public relations.

She sympathized with her friends in Europe and hoped they made it home safely thinking she was secure in her program.

But Monday she flew home after she said advisers encouraged students to book a flight as soon possible before they may not be able to any longer.

“One day I was on FaceTime with my friends in Barcelona and Florence that were in quarantine and sent home saying how beyond lucky we were to be in Australia,” Barsky said. “And the next thing I know, classes are moving online, and people are booking their flight one by one.”

Barsky’s parents were visiting when she was told she should strongly consider going home. They returned with her to Philadelphia. She was relieved she did not have to go through it alone.

She was also not tested after her flight and is surprised that the only questions she was asked at customs were briefly about her travels in Sydney.

“The process was very smooth, and we actually caught an earlier flight, which was nearly empty, back to Philly,” Barsky said. “They just wanted to know if we had been in China or close regions in the last few weeks.”

Joining the rest of the university, Barsky is making her transition to online classes.

“Nobody was prepared for this to happen,” Hill said. “The uncertainty and constant change of regulations made things quite challenging.”

Mia is a reporter for WUFT News who can be reached by calling 352-392-6397 or emailing news@wuft.org.
Previous The Point, March 26, 2020: Florida Courtrooms Shut Down Until Mid-April
Next Up All Light: Micanopy’s New LED Streetlights Generate Mixed Reactions