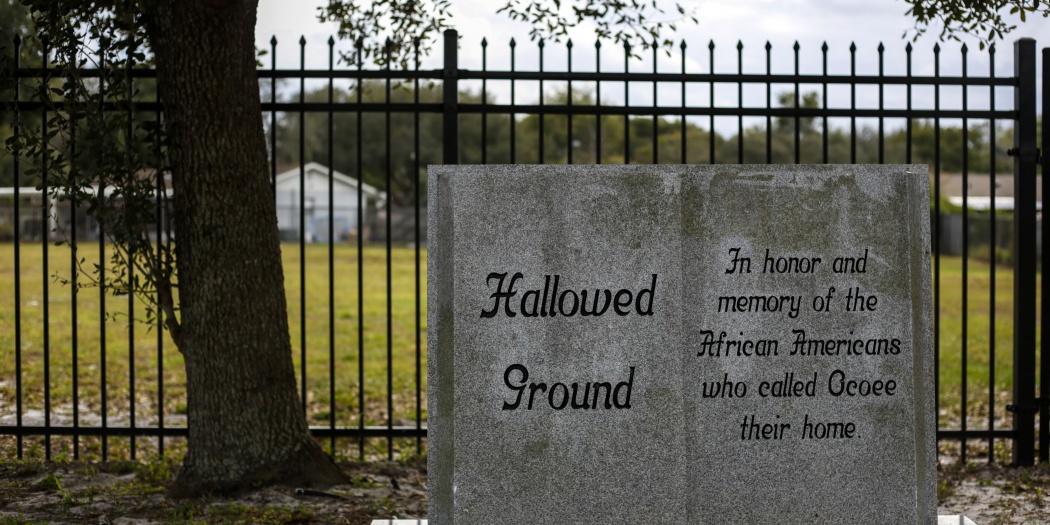 A memorial to the victims of the Ocoee Massacre is seen in Ocoee, Fla. on Jan. 24, 2020. (Sam Thomas/Fresh Take Florida)

‘The Night The Devil Got Loose’: Now, Some Floridians Are Shining Light On State’s Dark Past

Ocoee, Fla. — Tucked away in a central Florida cul-de-sac of houses coated in pastels, sits a grey marker resembling a headstone. It honors the memory of black people who once called this town their home.

“Hallowed Ground,” reads the engraving. In the silence, the hum of garage doors echo.

This is one of the only memorials to what is considered the bloodiest day in American political history.

As many as 60 African Americans died on Nov. 2, 1920 because they wanted to vote. Two years ago, Ocoee Mayor J. Lester Dabbs and the West Orange Reconciliation Task Force erected the marker to remember the tragedy and to begin meaningful conversations about what happened. Because for years, people did not even acknowledge it.

The marker is part of a movement afoot to try and make right the wrongs of the past and begin proper education of the Ocoee massacre.

This year, a measure introduced in the Florida legislature aims to compensate descendants of those who lost their lives that day. The Senate bill passed unanimously and awaits approval from the House, but with only one day left in the legislative session, it’s not likely to make it to the governor’s desk. Even so, those wanting to make sure history isn’t erased will keep fighting.

‘That was the night the devil got loose in Ocoee’

In the early 1900s, Ocoee was not unlike other small towns in the Jim Crow South. Under strict segregation, black people were subjected to strict laws designed to keep them from their constitutional rights.

And so it was on Election Day in 1920 when Moses Norman attempted to exercise his right to vote. Just days before the Ku Klux Klan had marched through Orlando, terrorizing the 250 or so black people of Ocoee.

Moses Norman and Julius “July” Perry were young, successful African-American labor-brokers in Ocoee. They were well-known in the community. Both men owned their own homes and land; Norman even had a car.

But when Norman went to cast his vote, white poll workers accused him of not paying a mandatory poll tax of $2, a fee implemented to suppress black voters in the South at that time.

By some accounts, Norman asked his friend Perry to accompany him to go before a judge. Others say Norman went to pay his tax or obtain proof that he had. According to the Equal Justice Initiative, Norman was assaulted at the polls and fled to Perry’s home.

By the time the polls closed that evening, Norman had not been able to cast his vote.

As the sun set that November day, an angry mob of white men led by local law enforcement  surrounded Perry’s home and attempted to arrest him. They fired a barrage of shots and set the neighborhood ablaze.

Perry’s wife and daughter, who was shot in the arm, escaped through the back and hid amid stalks of sugarcane. Norman also escaped the mob. But Perry was caught and thrown into the local jail until he was dragged out and hung from an oak tree in downtown Orlando. The site is possibly near Country Club Drive.

By some accounts, the white men then fired repeatedly at Perry’s lifeless body, dangling from the tree.

He was left as an example to other African Americans who dared to exercise their right to vote.

Over the next few days, white mobs burned down black homes and churches. Black people who fled were blocked from returning to their homes, and the perimeter of the town was on lockdown.

July Perry’s land was confiscated from Perry’s wife and daughter and given to one of the white founders of Ocoee, Captain Bluford M. Sims.

It’s not known how many people died in the Ocoee violence that November. The death toll ranges from six to more than 60. But what is certain is this: Within seven years, there were no black people living in Ocoee.

As the decades passed, the town of Ocoee rose to infamy for black Floridians, though the history remained murky.

Francina Boykin remembers her school bus driver telling her and her classmates to hush when the road from Apopka approached Ocoee. They listened, not knowing why but sensing the seriousness in tone.

Boykin also remembers family trips to Winter Garden when her family drove all the way around Ocoee, even though it made for a longer trip. Boykin grew up with all sorts of warnings to avoid Ocoee.

But no one seemed to know, or talk about, why. Something horrible had happened there, but what?

“I did not know the tragedy that had taken place,” said Boykin.

It wasn’t until around 1996 when she was invited to participate in the Democracy Forum, a research initiative that investigated the Ocoee massacre, that Boykin learned what had occurred.

It took the forum, composed of a couple dozen activists, historians and researchers, about two years of sifting through census records, property records, death certificates and other documents to rediscover the lost history. In 1998, the forum presented their findings to the city of Ocoee and began presentations around Central Florida.

Since then, the conversations have continued. Some have included the stories from a few survivors as well as descendants of victims.

One significant find, Boykin said, was speaking to Armstrong Hightower, who was 13 when he fled Ocoee the night of the riot.

“That was the night the devil got loose in Ocoee,” Hightower told Boykin.

Hightower recalled he was supposed to have had a birthday party on Election Day. His mother had planned to make ice cream.

None of that happened.

He remembered running through the orange groves that night with his sister to escape, turning around to see Ocoee engulfed in flames and smoke.

He returned to Ocoee 80 years later for an interview with the Associated Press. What took so long, he asked the reporter.

While efforts in research have been growing, many people don’t know about the history, for many different reasons. For one, it’s hard to talk about, said Pamela Schwartz, the chief curator for the Orange County Regional History Center. Also, it’s difficult to piece the story together because of a lack of records.

“There’s also an intentional obfuscation of this information,” Schwartz said. “Records weren’t kept because people didn’t want you to know what happened. And when I say people, I mean white people. So, it was really problematic.”

Other records disappeared or were intentionally destroyed.

“How are there no photos of Ocoee?” Schwartz asked. “There are none that we’ve ever found in existence. No photos of all these houses burned, of any of this situation.”

There were also lynchings of people who spoke publicly about the Ocoee massacre. A 1921 newspaper story described how a lynch mob went after a survivor of the riot. The man was beaten, disrobed, painted red and white and left for dead, but he lived to talk about it. The mob told him this happened because he was “talking a little too much.”

“A lot of times people just didn’t know really what even happened,” Schwartz said. “They heard shooting, firing and they ran.”

The Orange County Regional History Center is in the process of mapping deeds to get an idea of what the town looked like before Election Day in 1920. The center will be exhibiting their research with the help of the Democracy Forum this August to commemorate the 100 year anniversary.

A century after July Perry and so many others lost their lives, lawmakers are considering whether to compensate their descendants.

The bill would establish the Ocoee Election Day Riot Compensation Fund with the Florida Department of Legal Affairs for descendants. It would allow up to $150,000 of compensation per direct victim, meaning the compensation would be split among multiple descendants of the same victim. And, a descendent cannot make more than one claim.

The Senate bill passed March 5 but the House has yet to hear it.

“These are not the type of bills we see normally,” said Sen. Randolph Bracy, D-Orlando, and sponsor of the Senate bill. “We’ve had one, which is Rosewood, and that number was negotiated so I expect there to be some negotiations, but I would appreciate the willingness to address it.”

In 1994, the legislature passed a similar compensation bill for African-American whose families suffered in another racially-motivated massacre in Rosewood, a town about 130 miles northwest of Ocoee. There, too, white mobs had burned down black homes and businesses and in the end, at least six blacks and 2 whites were killed, although by some accounts the death toll was as high as 150.

The state allocated $2.1 million to provide compensation to those affected by the massacre. After the Rosewood bill failed in the 1993 session, a state-funded study was started to investigate what happened in the Levy County town in 1923. The study was released right before the 1994 session, affirming the riot, death and evacuation of black residents.

While the study of Rosewood solidified some of the story before the passage of the bill, research and proper education is a tenet of the Ocoee legislation.

It is not a part of the required state standards now and is not taught in Orange County, said Renée Burke, spokesperson for Orange County Public Schools.

The bill seeks for more public education by promoting programming in the Museum of Florida History and other state museums. There’s also a call for naming opportunities to honor the victims in state parks and public spaces.

“There’s still a lot of questions,” Bracy said. “For the purpose of doing a proper claim, I think that there needs to be a proper investigation, even 100 years later.”

Times are changing, Bracy said. Ocoee just elected its first black city commissioner in 2018 and a second one in 2019.

So Bracy and others remain hopeful that one day, the story of Ocoee will be better known.

Concealed in another neighborhood of single-family homes in downtown Orlando is Greenwood cemetery. It has been there since 1880.

The cemetery, blanketed with green grass and oak trees, is quiet despite the frenzy of life that surrounds it. Here, in this serene place, rest notable Floridians – the cemetery’s website boasts the names of former Orlando mayors and founders of Florida towns.

In Section K, lies July Perry, a new headstone finally marking his grave. In the freshly turned soil, pink and white carnations have been planted.

This story was produced by Fresh Take Florida, a news service of the University of Florida College of Journalism and Communications. The reporter can be reached at khayes@freshtakeflorida.com.