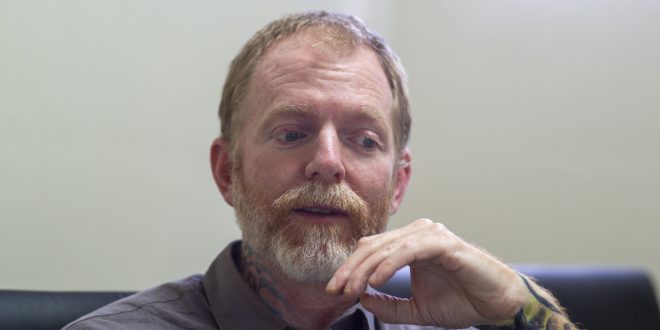 Kevin Scott is one of Community Spring’s five fellows. Scott was in a Florida prison for three and a half years and is now organizing for other returning ex-inmates. (Kasamba Kokayi/WUFT News)

When Kevin Scott was released from prison in Avon Park, he was given only a pair of swim trunks to wear. He found that no one would hire an ex-inmate, and for months had to sleep in his car.

Three years later, when Scott was volunteering with the Incarcerated Workers Organizing Committee, he heard about Community Spring, a grassroots group working in East Gainesville to help with the problems of poverty.

Community Spring was starting a fellowship program that would pay the chosen candidates to organize around a community issue of their choice. The current group of five fellows chose to work on the issues associated with former prisoners trying to become part of their community again.

Scott said the community does not make it any easy at the moment.

“Re-entry should begin on the first day, not the last day,” Scott said.

Scott said that when he got out of prison he had not seen his daughter in three years and could not earn enough to support himself and her. He survived only thanks, he said, to the generosity of his family.

“No one asked me, ‘How are you?’” Scott said. “You’ve just been dehumanized for years. How are you doing?”

At Community Spring he has founded a group called Torchlighters Re-entry Support. It is intended to help give former prisoners resources and someone to talk to who understands what they are going through, Scott said. They meet on the first and third Thursdays of the month from 6 p.m. to 7:30 p.m. at Gainesville Peer Respite, 728 E. University Ave.

Community Spring was created about a year ago by Lindsay Kallman and Max Tipping, now respectively its executive and policy directors. They launched the program with the first five fellows on Jan. 6.

“It’s about trying to find a direct way to get people paid, and working on something that’s going to help the community,” Tipping said.

Tipping and Kallman have worked in community development for more than a decade. Kallman was born and raised in Gainesville. Tipping is from Cooper City and went to the University of Florida. He worked in Washington as an attorney at a legal clinic for the homeless.

In addition to Scott, Nadine Johnson, Tequila McKnight, Latashia Mayze-Brimm and Charles Cromwell Jr., all from Gainesville, are part of Community Spring’s pilot fellowship program. They work 20 hours a week at Community Spring’s offices at Open Doors Ministries in Duval Heights. There they work on their various projects and make $15 an hour. The funding to pay them comes from private donations to the organization.

Veronica Jacobs, a law professor at the University of Florida, said she is glad to hear that Community Spring is working on an issue that has long been neglected. Due to bonding and licensing, many former prisoners find that they can’t get a job. Insurance agencies see them as a liability and in many states they can’t get vocational licenses, Jacobs said.

She said she believes that the problems with reintegrating former prisoners have less to do with law and more with the communities that stigmatize them.

“There needs to be a dialogue with the public on why some persons feel so strongly on why people who have paid their debt should still be excluded from the benefits of citizenship in our county,” Jacobs said.

McKnight, only two weeks after she got out of prison, was able to land a job at a fast-food restaurant on Newberry Road, but she said she was fired after the company ran a background check on her three months later.

McKnight now owns a cleaning business and heads social media at Community Spring, where she has also created the county’s first phone helpline for former inmates.

She said she believes that communities and businesses need to change the policies they have in place.

“Businesses need to change the stipulations that they put on hiring people,” McKnight said. “When someone does their time, the sentence should be over.”

Kasamba is a reporter for WUFT News who can be reached by calling 352-392-6397 or emailing news@wuft.org.
Previous ‘Best Dish in the Galaxy?’: Eastside High Culinary Students Await Word From NASA
Next The Point, March 5, 2020: New Gainesville Organizing Effort Aims To Help Ex-Inmates