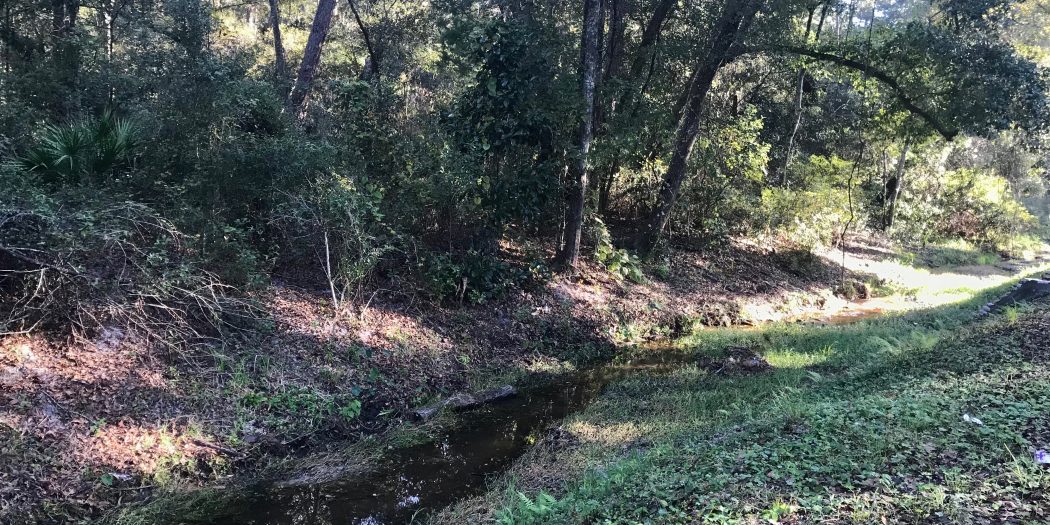 Lake Forest Creek is one of the creeks that has been contaminated by fecal matter. Removing faulty septic tanks will hopefully result in better water quality in this creek. (Molly Chepenik/WUFT News)

Signs posted at the public entrances along Hogtown Creek in Gainesville prohibit swimming, wading and bathing due to “health and environmental risks.”

One of those risks in that and other local creeks and aquifers is wastewater contamination – with some of it coming straight from the houses around them.

That’s because septic tanks stop working correctly after a period of time, which causes the release of harmful pathogens through unfiltered wastewater.

It’s particularly a problem in low income neighborhoods, and efforts are underway to connect those houses with failing septic systems to sewage lines. There are somewhere between 500 and 1,000 septic tanks in Gainesville – and they typically must be repaired or updated every 10 to 20 years, said Thomas Harrington, the city’s intergovernmental affairs coordinator.

“If we can help people out at the forefront, then we can prevent more hazard and reduce the amount of nitrogen and fecal pollution that goes into our creeks,” Harrington said.

State Rep. Clovis Watson Jr., D-Alachua, has filed a bill (HB 3541) seeking $250,000 in state funding to help pay for switching more homes away from septic systems. The city would match the funding with an additional $250,000.

The agriculture and natural resources appropriations subcommittee in the state House of Representatives will hold a hearing on the bill on Wednesday in Tallahassee.

Harrington said removing malfunctioning septic systems is one of Gainesville’s top priorities for the 2020 legislative year. He said septic tank replacement is not mandatory and would be voluntary for low income and elderly residents willing to take part in the project.

There is a waiting list of residents who want to do so, Harrington said.

Rick Hutton, the supervising engineer in the water and wastewater division of Gainesville Regional Utilities, said the neighborhoods to be targeted will likely be in East Gainesville.

Hutton also said people could save a lot of money by switching to the sewage system.

Some Gainesville Regional Utilities ratepayers, however, are wary of adding another monthly bill to their expenses.

Patricia Crews, 38, moved to the Fairbanks area northeast of city limits over a year ago. Her property has an old septic system, and she does not plan on getting rid of it.

“I don’t think the monthly bill is worth it,” Crews said. “There are a lot of things Gainesville could be spending money on. Traffic is horrendous and they need to focus on that.”

Terri Lowery, managing director and senior vice president at Jones Edmunds, an engineering consulting firm, said there are 2.6 million septic tanks in Florida, and that the ones causing the biggest pollution problems are the ones situated near waterways.

“It’s a difficult balance between personal property rates and what you’re doing in terms of impacting the environment we are all trying to enjoy,” she said. “It’s my hope that people will look to their impact and how they can mitigate it.”

John Rumpler, the clean water program director at the advocacy group Environment Florida in St. Petersburg, said someone replacing a septic tank is as important as a corporation no longer polluting a river.

“I think most people in Florida do deeply care about water quality,” Rumpler said. “We as taxpayers have to make sure we aren’t contributing to the problem.”

Several other Florida counties are working to replace septic systems with sewage connections.

Martin County began its efforts in the early 2000s, said Phillip Keathley, project manager at its utilities and solid waste department. A recent initiative will convert over 100 more properties – and the department aims to eliminate 10,000 septic systems within 10 years, Keathley said.

In Indian River County, the top 30 subdivisions targeted for conversion were ranked by need, said Arjuna Weragoda, 51, the county’s capital projects manager. Weragoda said the project construction was expected to cost $1.3 million, but ended up costing an additional $1 million.

“The health of our state depends on the health and quality of our water,” the governor said.

Harrington said with Gainesville’s increasing population, it’s the right decision for different levels of government to work together in order to sustain water health.

“It’s nice to have a local government lining up with the governor’s vision,” he said. “The timing is just perfect to begin doing this.”

Molly is a reporter for WUFT News who can be reached by calling 352-392-6397 or emailing news@wuft.org.
Previous Environmentalists Debate Energy Market Changes
Next The Point, Dec. 10, 2019: ‘I Will Not Go Quietly’: Melina Farley-Barratt Is The First Openly Trans Person To Run For Florida Senate