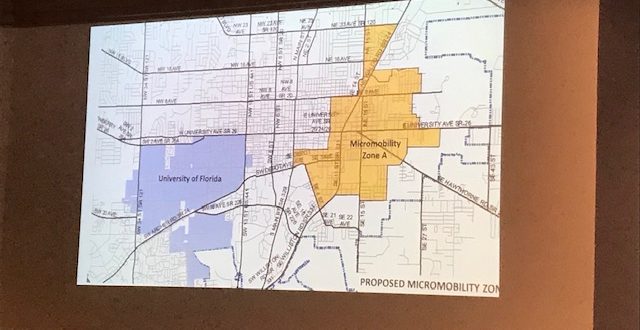 A map displays the East Gainesville areas where scooters will be permitted. (Andrea Maduro/WUFT News)

Scooters more akin to motorcycles flood Gainesville’s streets on a daily basis when University of Florida semesters are in session.

In the coming year, a new type of dockless, battery-powered scooter that the city is calling a micromobility device is on its way, too.

Gainesville City Commissioners talked about a draft ordinance that would regulate the scooters, which would be available in a zone of East Gainesville stretching from Southeast 4th Street near Depot Park to a large part of Waldo Road, and accessible from 6 a.m. to 10 p.m..

Spin, a potential vendor owned by Ford, discussed user costs, including $1 to unlock a scooter and 18 to 29 cents per minute of use. Malisa McCreedy, the city’s director of mobility, said taxpayer money isn’t involved in bringing the scooters to the area.

“This program is expected to be cost-neutral, so we don’t expect to spend a general fund on this program at all, but that’s part of the pilot,” she said.

UF plans to work with vendors and city government throughout the one-year testing period proposed in the ordinance. Jacob Adams, coordinator of UF’s Transportation and Parking Services Campus Bicycle Program, said the scooters bring up a lot of concerns.

“We’re concerned about safe operation,” he said. “We’re concerned about making sure that folks know where it’s safest to ride them, how to safely operate them. We’re going to be concerned that the scooters are parked and left in a way that’s not gonna create ingress or egress issues or ADA-compliance issues, so we’re sort of looking at how we can address all those things.”

Commissioner Gigi Simmons had her own concerns, too. She said she’s disappointed scooter vendors from Spin and Bird did not sufficiently address equity plans, which has become a key focal point for commissioners during the past two years.

“I would hope at some point we would take the equity into account and say, ‘You know what?” let’s start making sure that whatever vendors or whoever wants to do business with the city … let’s have an equity plan in place and then let’s make sure that everybody in the community can benefit from the services that are being provided,” she said.

Commissioners voted five-to-one to proceed with the ordinance, with Simmons in dissent. Now, McCreedy said the next step is to for vendors to get a permit application, requiring vendors to take the lead in implementing the scooters.

Andrea is a reporter for WUFT News who can be reached by calling 352-392-6397 or emailing news@wuft.org.
Previous Transgender People Weigh In On What Will Decide Their 2020 Vote
Next Gainesville City Commissioners Change Public Comment Rules For Their Meetings