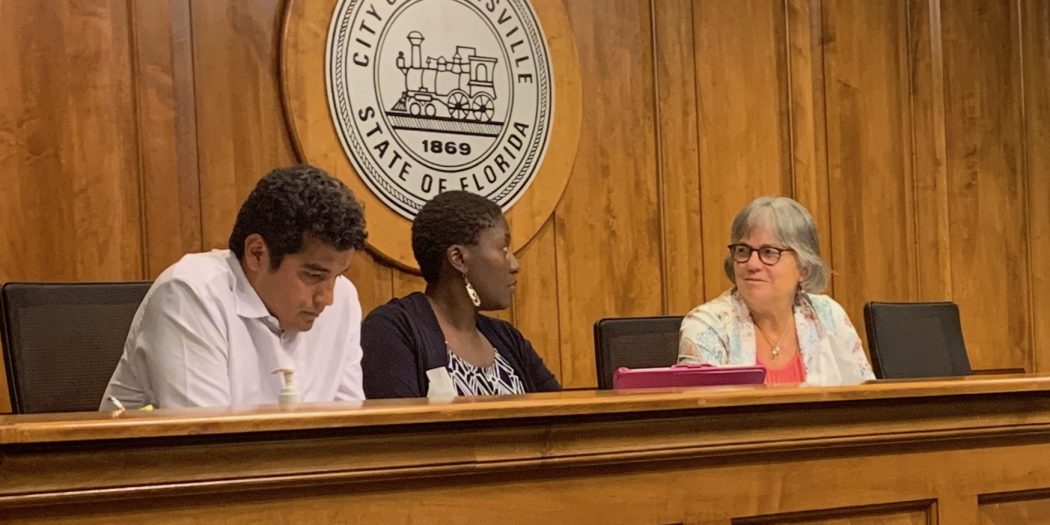 Commissioners Arreola, Johnson and Warren met to discuss how to bring about changes to address inequity in the city. (Sophie Feinberg/WUFT News)

In the orange light of the City Hall Auditorium, public commenters approached the wooden lectern outfitted with the seal of Gainesville to make recommendations to the city commission’s new Race and Equity Subcommittee on how to approach fostering equity in the city’s government.

The seal features a train that recognizes Gainesville’s founding and its complicated racial past. It is a history with which this subcommittee aims to reckon.

About 20 people gathered in the auditorium to voice thoughts on how to go about making a resolution to officially mark the city’s commitment to address its past and to discuss fostering equity in general. It was the subcommittee’s second meeting so far.

The subcommittee formed partially in response to a January 2018 report by the University of Florida Bureau of Economic and Business Research or BEBR that studied and documented details about racial inequity in Alachua County.

“But even more so than that, the inspiration for this specific subcommittee was some really disheartening data that we got about our workforce, about procurement, about many internal issues in city government where there are many disparities and inequities,” said Commissioner Gail Johnson, the chair of the subcommittee.

That data, she said, was the driving force behind creating the subcommittee, which also includes Commissioners David Arreola, Helen Warren and Harvey Ward, to change the inequity within the city’s internal operations. Ward was not in attendance Wednesday.

The data was something Johnson learned about in a May conference called Government Alliance on Race and Equity, or GARE, that was held in Albuquerque, New Mexico, and focused on eliminating racial barriers in government.

“We want to be intentional about eliminating any type of inequities or barriers that people may be experiencing,” Marshall said.

Other events like town halls have been held in the past to respond to the study, but the subcommittee, which Johnson formed, is the latest push to implement change.

Commissioners and the public went back and forth on the steps needed in order to more effectively include the community and pass a resolution officially stating the city government’s commitment to fixing racial disparities and acknowledging previous historical biases.

At the microphone for public comment, Henry said the subcommittee members need to be more forthcoming about spelling out what they want to achieve.

“Because if we soft pedal and not really attack the problem, then what we’re trying to do here is in vain,” he said.

Commissioner Warren was sometimes at odds with Johnson and Arreola throughout discussions on the process.

“I’m anxious to find the time to get that started,” Commissioner Warren said. “If not now, when? And, we’re celebrating 150 years, these are things we should be talking about on a community level.”

Johnson emphasized these are beginning stages of what work will entail. She said she has a lot to think about based on the public comments.

By the end of the agenda, all commissioners approved a few motions regarding setting up a citizen thinktank, compiling data on inequity in the area and how to more effectively engage with community members.

Yvette Carter, community relations director at GRU, made a comment near the adjournment of the meeting.

“This will not be able to be business as usual,” Carter said. “Every step of the way there will have to be a community engagement, not just a communications piece. So I think every topic we talked about today was a ‘How do we know this is the right thing?’ We won’t know until we are talking to the people it really affects.”

Sophie is a reporter for WUFT News who can be reached by calling 352-392-6397 or emailing news@wuft.org.
Previous Despite Pushback, Alachua County Ramps Up Airboating Curfew Enforcement
Next Gainesville Commissioner Simmons Hosts State Of The District Discussion For District 1