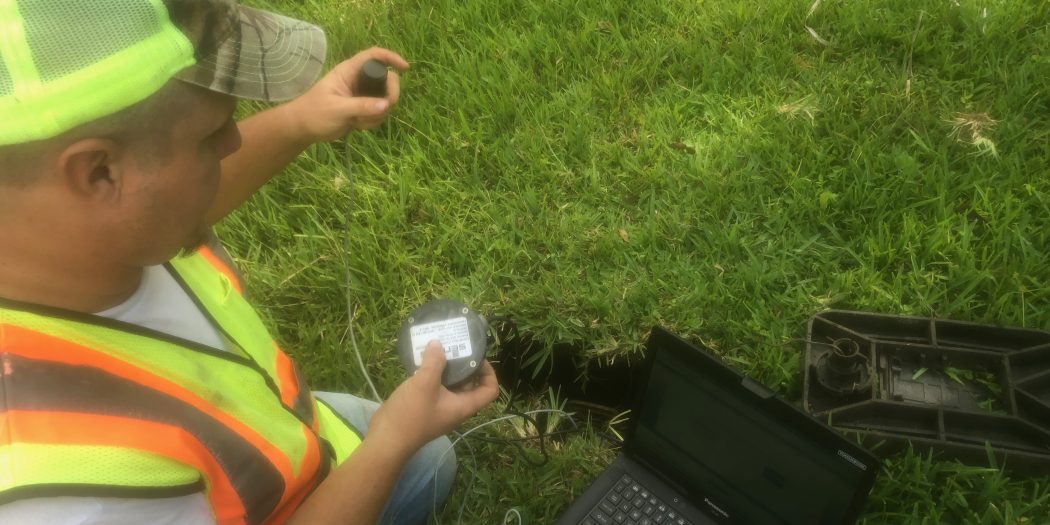 Smith demonstrates how the Sensus iPERL system that monitors water usage on each home works. When “touch reading” each meter, Smith can not only look at how many gallons of water usage the meter has read in a month, but how much water was used hourly. (Juliana Cuadra/WUFT News)

The Waldo city council members sat back, hands folded, awaiting citizens’ complaints about the ordinance they introduced the previous week, adding a 10% utility tax on the purchase of water in the city.

About 35 people showed up to the Oct. 8 meeting to weigh in on the first reading of the ordinance. Waldo residents were mad, but there was not much council members could do. If Waldo’s water utility is to remain under the city’s control, residents have to take on the tax. Otherwise, the utility is almost certain to be swallowed by a bigger fish – most likely Gainesville Regional Utilities.

The council voted unanimously to approve the 10% tax. The final vote on the issue will come at the council’s Nov. 12 meeting.

With the loss of its school and police department, as well as several of its businesses, Waldo has taken many hits in the past few years. To make things worse, the city of Newberry recently complained to the county claiming that Waldo, a city that hasn’t shown signs of growth, was receiving too high a percentage of the gas tax. As a result, Waldo, which operates on a budget of $2.4 million, lost 72% of its gas tax revenue to Newberry, High Springs and Alachua.

This redistribution of revenue will start gradually in 2020.

However, according to Mike New, Newberry’s city manager, the county divides the gas tax based on seven principles, including city road mileage to maintain and population. With consideration to these factors, he said Waldo has been receiving too high of a percentage for years, while Newberry has been consistently underfunded while experiencing a 260 percent increase in population since the 1990s.

“When we look at miles of roads we have to maintain, we are unfunded not a little bit but tremendously. Based on the principles, we would be getting two to three times more gas tax. We believe that there needs to be a fair distribution of the money,” New said. “For all the years that we haven’t had this revenue, we’ve had to find other ways to tax our residents. On one hand I empathize with Waldo, and on the other hand, I believe that they are dealing with what we’ve had to deal with for the past 30 years.”

Kim Worley, city manager of Waldo, said the redistribution of gas tax will be a huge blow to their community.

“We’re a small city,” said Kim Worley, Waldo’s city manager. “Bigger cities will always complain that smaller cities are receiving too much money because bigger cities need more money to operate, but that’s a big chunk of our income that they’re taking away.

“We as a city council cannot impose a tax without getting it approved from the county first,” Worley said. “We have to get income from somewhere to function, and if that means adding a tax only on water, not even on sewage, then that’s what needs to happen.”

However, not all Waldo residents see it that way. Many are angered by the thought of paying more for water, complaining that their water bills are already too high.

“I’m new to Waldo,” resident Cecilia King said at the Oct. 8 Waldo city council meeting. “I’ve lived here for two years, and I’ve never had a water bill this high in any of the places I’ve lived.

“I’m constantly getting the same water bill every month. I know I’m not using the same amount of water every month because I filled a pool one month during the summer and drained it shortly after because it was too expensive,” King said. “My water bill has consistently been the same every month since, and now you’re going to raise it even more? I mean, it’s ridiculous.”

Her comment was met with nods of agreement and mumbles of confirmation from other, including from Cyndi Orton-Bolton, another Waldo resident who sat next to King.

“Same here,” Orton-Bolton said. “We’ve had the same situation with our water bill.”

While the proposed 10% tax on water would only add an extra $2.79 to $3.09 on to the bill for the majority of residents who use between 3,000 and 4,000 gallons of water a month, that could make a huge difference for some. Although the cost of living in Waldo is 6.4% lower than the national average, the poverty rate is a considerable 16.2% compared to the national average of 13.4%. The median household income in Waldo is $27,147 in comparison to a median annual income of $60,336 across the United States, according to Data USA.

Resident Marie Ankney, who has lived in Waldo for more than 35 years and cooked for the school’s cafeteria for 8 years, reminisced about what Waldo used to be like.

“Waldo was a lovely little town 35 years ago,” Ankney said. “It’s lost a lot of things since then, like the school and police department, but the thing about Waldo is you either love it or leave it. And those that are leaving it are also leaving us with the burden of higher taxes, which makes more people leave.

“A few dollars might not sound like a lot, but it is to a lot of people here,” she said. “(The city council members) think they’re solving the problem, but it will just keep getting worse.”

Despite the complaints, Worley said the city of Waldo tries to keep water costs low by operating under its own water system rather than under GRU. While GRU manages the Waldo sewage system, Waldo gets its water from its own wells and then transfers it to its own water plant for treatment.

Water usage is regulated by newer water meters installed five years ago in front of each house. Public workers for the Waldo water administration read the meters on each individual house between the 15th and 18th of every month, and each household is charged to the lowest thousand gallons of water usage. The extra gallons roll over into the meter reading for the next month and show up in the next water bill.

If a household used 3,347 gallons of water one month, it would be charged for 3,000 that month, and the 347 gallons would be calculated into next month’s bill.

“I think a lot of people think of us as the bad guys,” said CJ Smith, a meter-reader for the water administration. “We get a lot of complaints of people claiming that there is something wrong with their meter and that is why their water bill is high, but the meters are extremely accurate down to 1/100 of a gallon. Leaks, a running toilet or even a dripping faucet can make a huge difference in water usage.

“The majority of the time, this ends up being the issue, but if the meter is the issue, we are happy to replace the meter, and the customer will be billed for the minimum amount of water usage for that month,” Smith said.

Since not everyone is aware of how their water bill is calculated, people can be skeptical of getting the same bill every month, thinking that the system is rigged, he said.

“A lot of people don’t understand how the water system works or that their bills are based on a tier system,” Smith said. “We get a lot of complaints from people saying that their water bill doesn’t change every month, but if you’re consistently using around the same amount of water every month, the total will come out exactly the same because of the 1,000-gallon system.

“Water here is pretty cheap compared to many other places,” he said. “If we’re being honest, accountants have said we should have had a water utility tax from day one.”

Smith said that the water administration workers try to provide good customer service, even going out to houses to run tests on the meters and prove their accuracy to skeptical citizens.

“We are a small city, so we are like family in Waldo,” Smith said. “We really try to give our customers the benefit of the doubt and help them to trust us and our system. If they have complaints, we will go out and personally investigate the issue.”

Worley said the city council has no choice but to pass the 10% water tax, even though no one – including city employees – want to pay more for their water. Otherwise, she said, the consequences for Waldo could be dire.

“People have spread rumors that people that work with the city don’t have to pay for water, but that’s in no way true,” Worley said. “We have to pay it just like everybody else.

“If we don’t have this tax, and we experience a shortfall in income, we could lose our city to the state,” Worley said. “Then, as far as water, we would probably be under the control of GRU, which could lead to even higher taxes.”

Worley said the real solution would be to increase Waldo’s economic base by bringing more people and businesses to the city.

“If we want to get our taxes lower again, ultimately, I think we need to bring more businesses back to Waldo, but until that happens, our taxes will continue to climb.”

Editors note: 72% of the gas tax previously allocated to Waldo, is now split among Newberry, High Springs and Alachua counties, not solely Newberry. Additionally, Newberry operates on a budget of $18 million.

Juliana Cuadra is a reporter for WUFT who can be reached at julianacuadra@ufl.edu.
Previous Airport’s Missing Money Case: Judge Orders Year In County Jail, Restitution Payments
Next Nov. 4, 2019: Morning News in 90