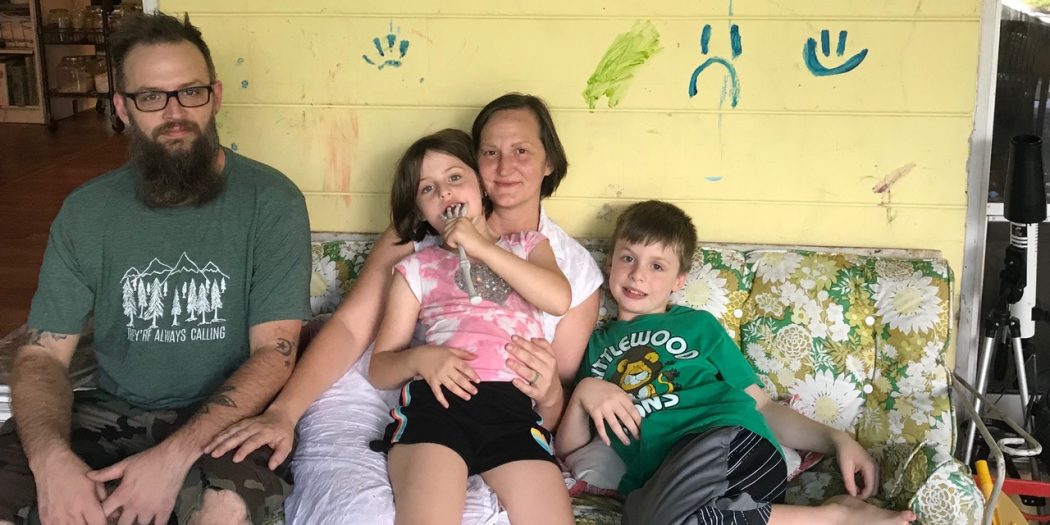 Coe-Gross said she tries to spend as much time as possible with her husband, Mike Gross, 40, and their two children, Addy Ray, 6, and Gabriel, 8. (Molly Chepenik/WUFT)

The doctors told Iris Coe-Gross she had a 1% chance of surviving stage 4 breast cancer.

Many people supported the lifelong Gainesville resident through her sickness. She didn’t know how to thank them, until an aunt sent cards of watercolor paper, and she picked up a paintbrush. She sent out Christmas cards to show gratitude, and through the art she found her own catharsis.

“It took me out of feeling ill,” said Coe-Gross, 40, who had been a nurse, “and into a place of feeling like I could control something at a time when I felt like control was out of the question.”

First diagnosed in April 2014, she achieved remission before relapsing in 2016. She has now been in remission for nearly seven months. A close friend has called her a walking miracle.

At a point during her relapse, Coe-Gross became too tired to paint, so she drew a portrait of herself with a Sharpie. She put a message out on social media to contact her if anyone wanted portraits of a breast cancer survivor. It could be of themselves or a family member or a friend.

Coe-Gross’ collection of 26 cancer survivor portraits is on public display for the third year in a row during October, which is Breast Cancer Awareness Month. This year, the art is hanging at Springhill Therapeutic Massage, 3700 NW 91st St. It will be there into early November.

Calling art her “daily medicine,” Coe-Gross adds a few portraits every year, including ones of survivors of all kinds of cancer. The show is called “If Hope was Money, I’d be a Millionaire.”

“I really enjoyed that saying when I was going through cancer,” said Coe-Gross, who relishes her time with her husband Mike Gross and children, Gabriel, 8, and Addy Rae, 6. “I imagine all the women in the portraits survive or thrive and get over this just by having a lot of hope.”

Coe-Gross said people who see the exhibit “are so touched and really need to be touched at that time.” She doesn’t sell any of the portraits, but will give free prints to anyone who wants one.

One of the portraits is of Christine Bruton, 44, of Gainesville. Bruton and Coe-Gross became friends at a breast cancer support group at UF Health Shands Hospital. The artist drew Bruton’s portrait when Bruton was in complete remission in 2017.

Bruton said the collection is aptly named. In the middle of treatment, she said, “you kind of just switch your mindset to hope. That’s the way to survive. If it was money, we’d be millionaires.”

Coe-Gross “grows a lot of hope” in the way she “smiles through life,” said Bruton, who added that she always tries to go to her friend’s art shows, even though she recently “backed off a bit” from participating in other breast cancer awareness efforts.

“Cancer has taken a couple extra things I wasn’t expecting. I thought I was going to be able to have children,” Bruton said. “This month it still doesn’t feel like I’m in a hopeful enough place to be able to walk with women and make them feel positive.”

Stacey Hyers, 43, owns Springhill Therapeutic Massage. She is close with Bruton, and met Coe-Gross through her. Hyers said she was honored to show the portraits in her massage practice.

Tears swelled in her eyes as Hyers spoke about seeing Bruton battle breast cancer: “Not only was Christine hoping, but so were we. The whole time it was just hope. Hope you live, hope you survive, hope you don’t get sick. There’s really not a whole lot you can do, just love them.”

Another portrait is of Sherri Gold, 53, of Jacksonville, who was first diagnosed in 2009 and has stage 4 colon cancer. Gold said a mutual friend asked her to offer Coe-Gross some support when Coe-Gross became ill. Their friendship began over text messages and evolved into visits.

Gold said she cried when she saw her portrait.

“Sometimes you feel very solitary, and she has pulled together these portraits for a community of strong women that have overcome such incredible hardships,” Gold said.

Gold has found her own such liberation in painting furniture and participating in furniture shows.

Margo Chase-Dobrian, 74, of Gainesville, became one of Coe-Gross’ first portraits. The two met when they worked as nurses in the bone marrow transplant unit at UF Shands.

Chase-Dobrian, who is now retired, said if she’s learned anything from being a breast cancer survivor and a nurse, it’s that you can’t wait for life to begin again after your sickness goes away.

“The important thing is to live every minute that you have,” she said. “I use all my skills to encourage people to live and to not be a patient every minute.”

“I always hope any woman that comes into that room is going to go home and do a self-breast exam when they get out of there,” she said.

Molly is a reporter for WUFT News who can be reached by calling 352-392-6397 or emailing news@wuft.org.
Previous With Traditional One In Transition, County Fair With New Name Operates In Gainesville
Next The Point, Oct. 28, 2019: Giant Flames Erupt From Tanker Truck After Deadly Crash In Gainesville