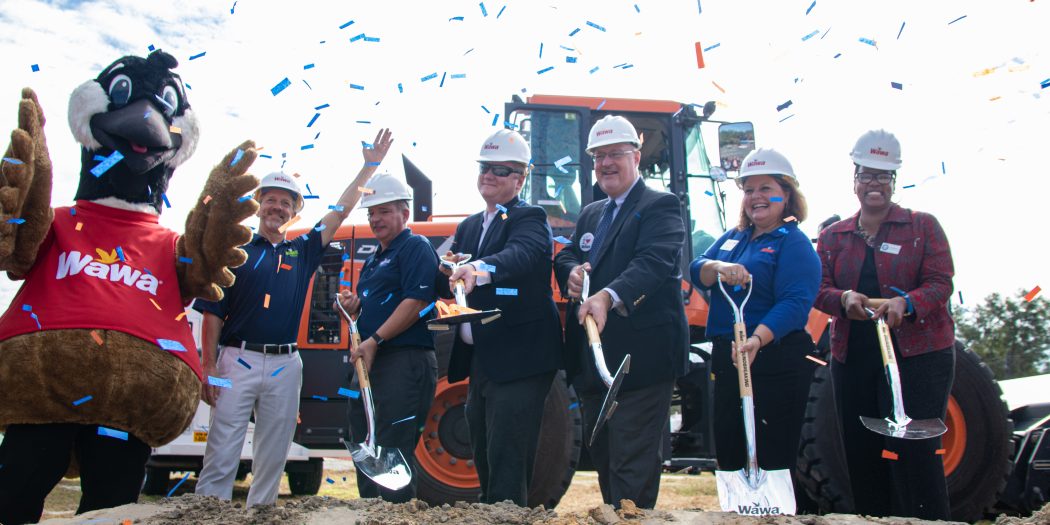 A giant goose costume, a hoagie building competition and hard hats and shovels marked the occasion Tuesday as Wawa held two groundbreakings to celebrate its expansion to Gainesville.

Five of the popular gas and convenience stores will open in the city beginning as early as April, including one site just across from the University of Florida campus, Wawa officials said.

That location – the former site of the UF Bookstore at 1614 W. University Ave. – will be a convenience store only and the first Wawa in the state without gas pumps.

“It’s really about the site that was there,” said Todd Souders, senior director of store operations for Wawas in Florida.

Souders said Wawa had not planned to open a non-fuel store in the state, but it found the location “so energetic” that “we were like, ‘We got to start looking in other ways beyond fuel.’”

Gainesville officials issued Wawa a permit to develop the former bookstore site in July. That location and one at 2373 SW Archer Road by the Bartram Apartments should open in April, said Dave Filano, the company’s national director of store operations.

After opening its first in the state in 2012, Wawa has about 200 locations in Florida. Based in Pennsylvania, the company has about 850 stores nationally and hopes to open 25 to 30 new stores in Florida each of the next couple of years.

“This is our third largest state behind New Jersey and Pennsylvania,” Souders said. “Either next year or the following year, we’ll be the largest state hands down. It’s exciting.”

Souders and Filano joined area elected officials, representatives from UF and the company’s mascot, Wally Goose, for ceremonial groundbreakings at two of the Gainesville locations.

At the West University Avenue site, Wawa also showcased an interactive mural and a virtual reality viewing of the future site. It also had leaders from Dance Marathon, a student-run philanthropy initiative at UF, compete in a hoagie building challenge, with the winners getting a trophy and both teams each receiving a $1,000 donation. The company also launched a social media competition with the grand prize of a customized Wawa moped scooter.

Some UF students were ecstatic to learn that a Wawa would be across from campus.

“This is the best day of my life,” said Rosie Mick, 21, a psychology major who added she would be willing to write a three-page paper about how much she loves the stores. “I’m from New Jersey, so Wawa in Gainesville, it’s like my worlds are perfectly aligned.”

Other students were not nearly as excited.

“I was really confused to hear that it’d be built without a gas station near it,” said Voungel White, 22, the customer service manager at the neighboring Gator Plus apparel store.

White also said he does not plan to eat at the new convenience store.

“What is drawing me to Wawa to pay the same pay price for Chipotle, which is right next door, or Tijuana Flats just the other way?” he asked. “If I really wanted gas station food, I’d go to a gas station to get gas and get food.”