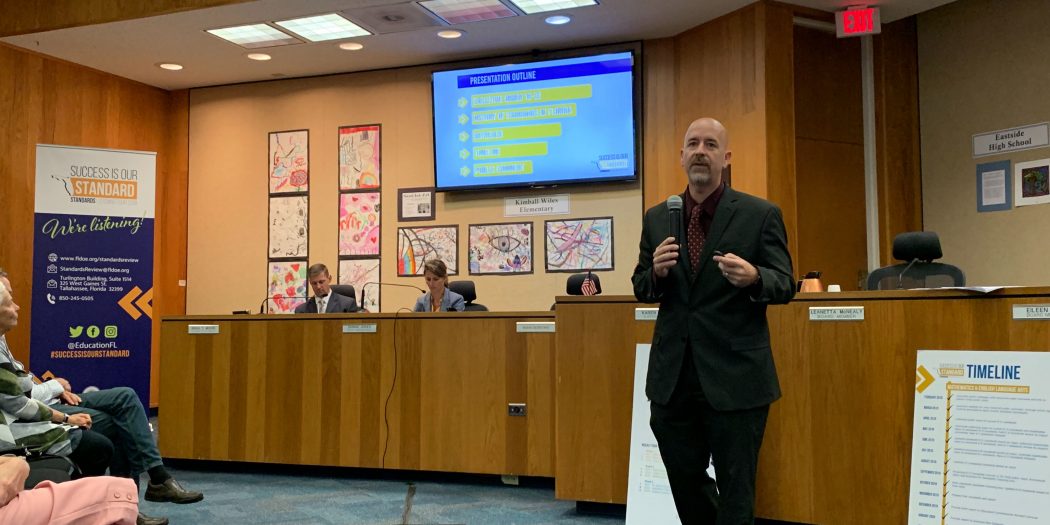 The Florida Standards Listening Tour stopped through Alachua County, with state education officials hearing from area educators about proposed changes to how students are assessed.

Gov. Ron DeSantis signed an executive order in January that called for the state Department of Education to replace the standards for public education of kindergartners through 12th graders. The standards were first implemented, at the urging of the Obama administration, as Common Core in 2010. They were modified and rebranded as Florida Standards in 2014.

The executive order requires the department to recommend by Jan. 1 how Florida can “return to the basics of reading, writing and arithmetic,” suggest innovative ways to streamline testing and outline a path for becoming the nation’s most literate state.

It has received more than 80,000 reviews from the public so far this year, Oliva said.

Education Commissioner Richard Corcoran and Marva Johnson, vice chairwoman of the state board of education, joined Oliva at the listening tour meeting. Fourteen speakers addressed them.

A recurring concern: developmental standards set for students in kindergarten to second grade.

Jennifer Anhalt, who teaches pupils at those levels in Alachua County, said kindergarteners should not be expected to write well enough to express an opinion about any particular topic.

“When we look at these standards, I think we really need to make sure we’re looking at what we really want a kindergartener to be doing and to be able to do,” Anhalt said.

Megan Hendricks, who has a background in development and higher education, worried about having kindergartner through third graders being expected to use technology to learn.

“I believe that use of technology has a negative impact on brain development at that age and should be moved to a later age,” Hendricks said.

Susan Bowles, a veteran kindergarten and first grade teacher, asked if those on the standards committee have recently been in a classroom or an early childhood education background.

“If you truly want the best for children in Florida, you will consider the age appropriateness for our littlest learners,” Bowles said.

Primary students were not the only topic of focus.

Randy Osborne, an education advocate with Florida Eagle Forum and the Florida Stop Common Core Coalition, drew negative whispers from some in the audience when he suggested the math standards move Algebra 1 to eighth grade. Osborne said doing so would allow equal opportunity for all students, no matter economic status, to better access STEM areas of education.

“Not everybody is on the same level,” Biener said.

“Oftentimes, I have students who have learning disabilities – and they already feel badly that they are not, quote-unquote, smart enough to do this,” Biener said.

Some speakers offered suggestions on how the standards can improve as a whole.

“We need to go back to ensure our curriculum is strong and phonics,” Diyonne McGraw said. “If a lot of our children can improve in reading, they would do better in every other subject area.”

McGraw said focusing on the basics would help Alachua County reduce its wide achievement gaps between African-American and white students.

Carmen Ward, president of the Alachua County Education Association, complained about allowing each speaker only two minutes to speak to the assembled state officials.

“A two-minute time frame from the people who have devoted their lives to children and educating students in the state of Florida, this two-minute time limit is absurd,” Ward said.

For their part, the officials insisted public feedback was being taken seriously.

“You guys are powerful, you’re mighty and it’s being heard,” Oliva said.

Alexandra is a reporter for WUFT News who can be reached by calling 352-392-6397 or emailing news@wuft.org.
Previous ‘Grain by Grain’: Bob Quinn Visits Gainesville to Share the Power of Organic Farming
Next The University of Florida And Downtown Gainesville Celebrate National Coming Out Day