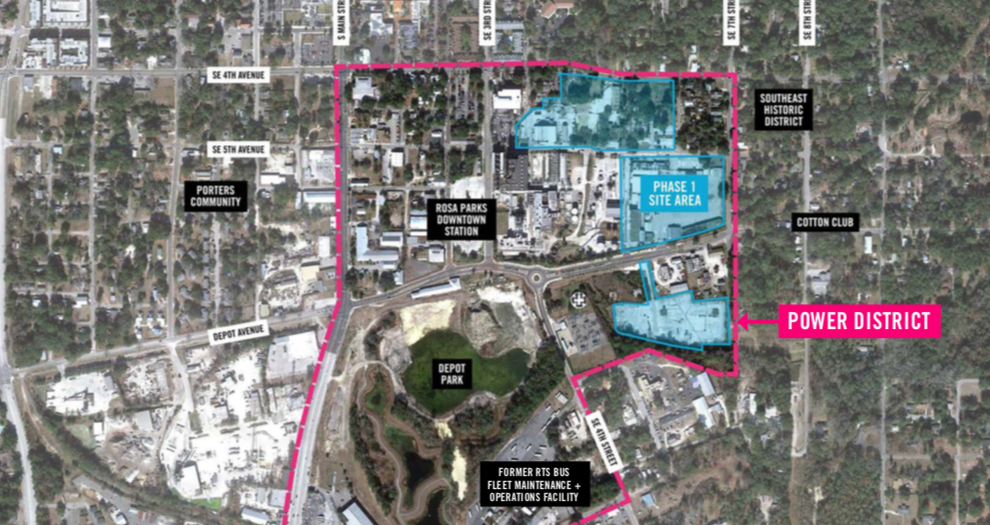 The Gainesville Community Redevelopment Agency is working on behalf of Gainesville Regional Utilities and the city to facilitate the 17-acre district between downtown and Depot Park. An important point of discussion remains the exact outline of the district’s boundaries.

According to the redevelopment plan, the district includes mostly former industrial buildings that are around GRU’s headquarters, administrative buildings and the Kelly Power Plant. An agreement with the utility is needed before a developer can be hired, officials said.

CRA Manager Andrew Meeker said city officials will need to outline the area’s boundary in order for the project to move forward.

“We recognize that there may be some inherent conflict between” the utility and agency, said Meeker, who added, “That’s why we need them – the elected officials, the policymakers – to give us that direction.”

Solicitation began in 2016 and Cross Street Partners, a Baltimore developer, had been selected for the district. In March, however, negotiations ended because key personnel from Cross Street Partners opened a new company. CRA could not transfer development rights to the new company, which required having to restart the process, officials said.

Harvey Ward, chairman of the CRA board – which is composed of the Gainesville City Commission – said he is encouraged by the next step in the redevelopment opportunity.

“We are starting from scratch with the benefit of a broader range of information,” Ward said. “I’m far more interested in doing things right than in doing things quickly.”

David Arreola, the CRA board’s pro-tempore, said Cross Street Partners has demonstrated the potential that the Power District has for the community.

“Our last partner – even though they didn’t really work out – they had a great vision,” Arreola said of Cross Street Partners. “I think that they actually showed that there could be something bigger for the Power District than maybe we originally thought.”

Whichever company becomes the new developer will have plenty of knowledge about the district. CRA has spent more than $150,000 total on several related studies, including environmental analyses to look at the subsoil’s condition and for possible contamination.

Meeker said the assessments should help private investors make a quicker determination about the area and inform them of the financial implications of redeveloping it.

“These are fewer documents, fewer efforts, shorter time limits on the work that the private sector has to do in order to evaluate whether this is a worthwhile investment for them,” he said.

The process, which has been in the works since 2008, has produced tangible results, such as the Catalyst Warehouse. In 2011, the underutilized building was turned into a place for “tech-oriented economic development,” as the redevelopment plan states.

Another result seen in the decade was the rezoning of the Power District from Public Services and Operations District and Central City District to Urban Mixed-Use District. The rezoning reclassification is more accepting of residential, commercial, retail and offices, Meeker said.

In the future, Meeker said, the CRA is expected to become a city department, which could expedite the process since everything will be under one entity.

Adrian Hayes-Santos, a member of the CRA board, said he is looking forward to seeing what the Power District can turn into once the process is completed.

“I think it’s a great opportunity for redevelopment,” Hayes-Santos said, “taking an area that was, in essence, kind of an industrial wasteland and turning it into a vibrant area.”

Hayes-Santos said he is open to a couple of options when it comes to redeveloping the area. They could include having one company redevelop the district or multiple developers being a part of the initiative, he said.

At a CRA meeting in July, she also noted possible ramifications for the existing infrastructure.

“You’re going to have a lot of cars, a lot of driving, a lot of heavy impact on these small streets,” said Simmons, who is the District 1 City Commissioner in Gainesville.

The next public meeting that will include talks about the Power District will be held in October.

Arreola said he hopes a developer can be found within the next year.

“We want to make that decision as quickly as possible so we can get started,” he said. “Nobody wants to see this wait around forever.”