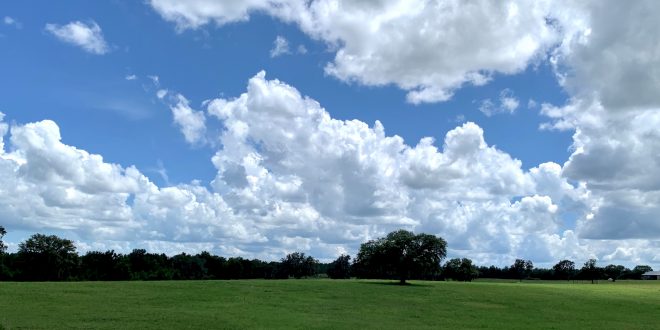 The clouds over a farm near Williston. (Henry Coburn/WUFT News)

This story is part of Untold Florida: Your Story, Your Neighborhood, a WUFT News series built from your questions. Maria Ransone noticed that her Williston-area home receives significantly less rain than other surrounding areas, and she asked WUFT to look into why that may be. In the second part of this edition, we will explore why residents seem to be noticing more mosquitos this year than normal.

North central Florida wouldn’t be the area it is without rain, especially in the summertime, but could certain areas remain significantly drier than others? Some residents think so.

Rain is so commonplace in day-to-day life that Gainesville has been given the nickname “Rainesville.”

The area receives almost four feet of rain – more than 47 inches – in any given year.

However, sometimes, lines of storms can move through the region, inundating certain areas with rain while missing others entirely.

Above: Hear “Untold Florida” podcast host Henry Coburn report this and other stories about the effects of summer rain in and around Gainesville.

Maria Ransone says her property is bypassed by showers and thunderstorms just about every time a storm forms on the radar.

Ransone lives in the sandy hills near Williston. It’s a scenic drive along Highway 27 with rolling pasture and dense clusters of tall trees.

Since moving to the area from the City of Alachua about nine months ago, Ransone has mowed her lawn only three times, and all three times have been within the past month or so.

“John, the previous owner, said, well, it never rains here. It rains all the way around us, and it never rains,” Ransone said. “And so I thought, okay, and being a gardener, I kind of took it with a grain of salt at first because you know, people always say something and sometimes it doesn’t work out.”

However, Ransone found that what the previous owner told her was true. She said it will storm 360 degrees around her house, yet her 6-acre property won’t get a drop of rain.

“I can look over to I-75 in that general direction, and it’s just beautiful clouds lightning and black on one side. And you know all these beautiful colors and it’s like, okay, so when am I going to get any of that?”

So, why do storms tend to miss Ransone and her neighbors? Why are the sandy hills so dry?

There are numerous factors that go into the making of a thunderstorm: moist air, atmospheric instability and mechanisms, which force the moist air to rise, like daytime heating or winds that come onshore from the Gulf of Mexico and the Atlantic Ocean, called sea breezes.

“So sea breezes oftentimes are the trigger for showers and thunderstorms across the state,” said Florida Public Radio Emergency Network Meteorologist Ray Hawthrone.

Hawthorne said most of the afternoon storms North-Central Florida receives are the result of converging sea breezes.

“What will happen is during the day the land will heat up faster than the ocean will,” Hawthrone said. “And so what happens is, you’ll see the air rise over the land, and you’ll have something that comes in to replace it. And that’s the sea breeze front that moves in. And what happens is that sea breeze front can be a trigger for thunderstorms.”

The location of the storms can often be dictated by where the sea breezes collide, Hawthorne said. He said that although this phenomenon may look random, it mostly occurs toward inland areas.

“It seems like there’s randomness to it. And it may look that way,” Hawthorne said. “But in fact, there really is something happening on a really small scale in the atmosphere that’s causing a thunderstorm to be over one location and not be over another location.”

Esther Mullens is an assistant professor in the department of geography at the University of Florida. She said while it may seem like storms avoid certain areas, that probably is not the case.

“There is no reason that any particular area of land would routinely never experience these storms,” Mullens said. “On one day, Gainesville can be completely missed and on another day, Orlando can be completely missed and Gainesville will get all kinds of rain and so that the overtime you begin to see that those types of specifics filter out as you look at the overall climatology.”

Mullens recommends setting up a rain gauge to track just how these storms could affect your property.

Back in the sandy hills, though, Ransone said she has a rain gauge. It just doesn’t get much action.

“It’s just the… it was just a strange thing that so many people have told me it doesn’t rain here,” Ransone said. “And then of course, like I said, when I get here, it doesn’t rain.”

Henry is a reporter for WUFT News who can be reached by calling 352-392-6397 or emailing news@wuft.org.
Previous Here Comes Tom Petty Historical Marker
Next Are There More Mosquitoes This Year Than Usual?