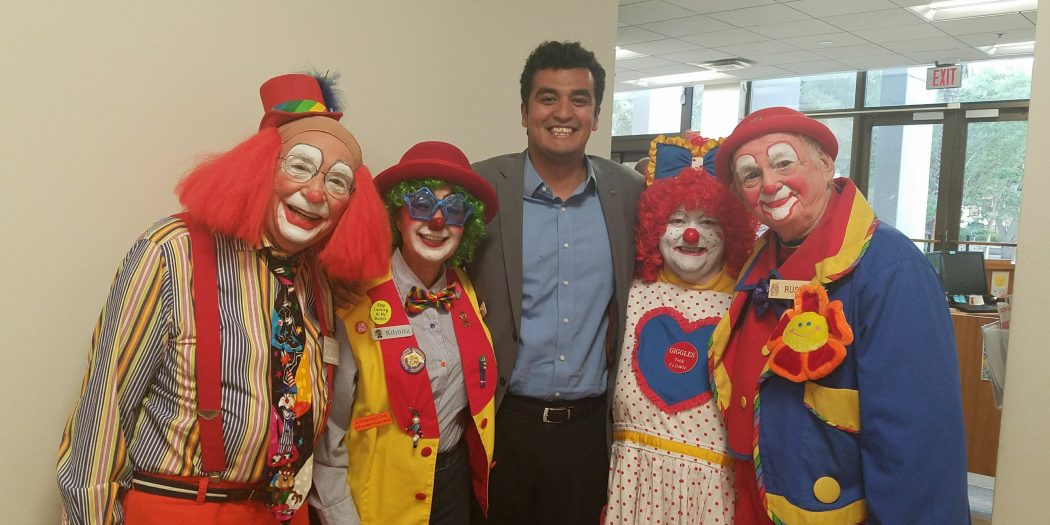 By Everitt Rosen and Danielle Ivanov

But soon after “Giggles,” “Rusty,” “Mr. M.T. Head” and “Kibbitz” gave Poe and the city commissioners paper smiles on popsicle sticks as thanks, the meeting devolved into chaos.

For the next three hours, the elected officials and members of the public fought over speaking time and decorum. Two people staged a sit-in in protest – after Poe ordered a police officer to escort two women from the meeting for what he deemed prohibited clapping.

Faye Williams, 63, was the first to sit on the auditorium floor. Williams, who recently moved back to Gainesville from Washington, said she had planned to speak during the public comment period about affordable housing. The tension in the room led her to civil disobedience.

“It really made me angry – no, outraged – when Poe asked the police officer to remove two of the women,” she said. “This is just the beginning.”

Donald Shepherd, who unsuccessfully challenged Poe for mayor in the 2016 municipal election, joined Williams on the floor for roughly 15 minutes until Poe called a recess.

“We wanted to stand up for the rights of the people,” Shepherd said.

After the recess, audience members continued to use their allotted three minutes to berate the mayor and commissioners for their facial expressions, eye rolls and conflicting rule application.

During his turn to speak, Nathan Skop, who lost his bid for mayor against Poe in 2012, showed a video of Poe allowing audience members at a past commission meeting to clap.

Commissioner Helen Warren responded to the negative commenters by calling them bullies.

“In the five years I have been here, I have never been so embarrassed with the amount of behavior that we’ve had growing, boiling, in this room,” Warren said. “I am angry and annoyed.”

Commissioner Harvey Ward agreed as he raised his voice to the audience.

“I’m just fed up and disgusted,” Ward yelled. “There are people who don’t come … because they’re scared.”

Skop countered with a retort about Poe’s recognition of the clowns.

“There are people who are scared of clowns, who have a clown phobia, yet you let them in,” he said.

In 1971, President Richard Nixon signed into a law a measure by Congress establishing Aug. 1-7 as International Clown Week in the U.S. In a formal mayoral proclamation, Poe invited “all our citizens to join me and recognize the contributions made by clowns in their entertainment and generally helping to lift the spirits and boost the morale of our people.”

Kibbitz, aka Andrea Brinsko, 66, of Gainesville, said in an interview outside the auditorium that clown week is supposed to celebrate the joy that clowns can bring to others.

“It just breaks my heart to hear someone say, ‘Oh, I’m afraid of clowns,’” said Brinsko, a treatment coordinator at a local dentist’s office. “We are getting a bad rep right now with scary clown sightings and that stupid movie ‘It’.”

Everitt is a reporter for WUFT News who can be reached by emailing news@wuft.org or calling 352-392-6397.
Previous Jul. 18, 2019: Morning News In 90
Next 1,778-Acre Site Planned Development Could Be Rezoned As Agricultural Land