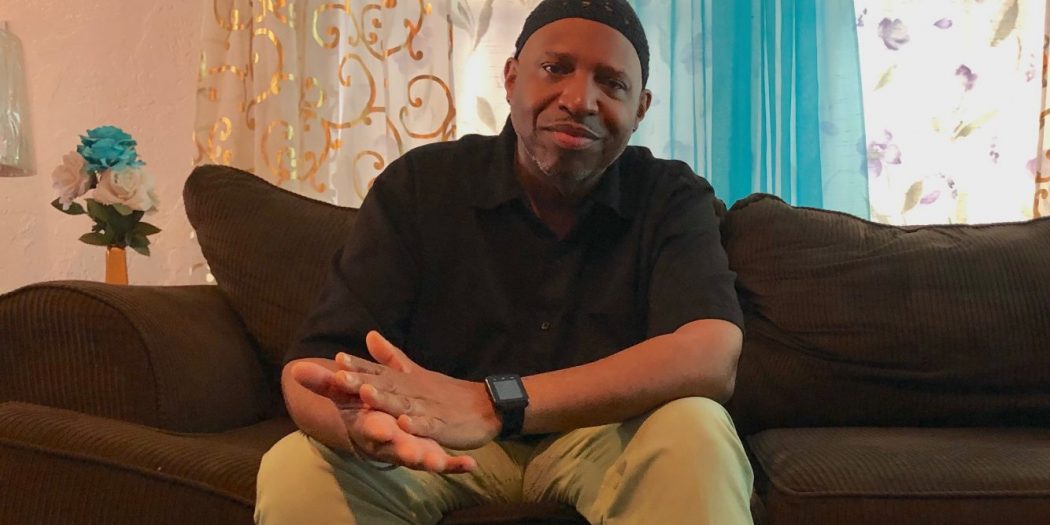 Aubrey Strong sits on the living room couch in the home he shares with his fiancee, Keosha Burke, her daughter, Keona, and his daughter, Kelsey. (Danielle Ivanov/WUFT News)

Kelsey Strong toddled along the hallway, barely awake and in her bare feet and pink shirt, looking for her father, who was sitting at the dining table in their Gainesville home.

Aubrey Strong, 54, was released from the Alachua County Jail early last month after a half-year stint for a grand theft probation violation.

He said it “killed me” to miss Kelsey, who is 17 months old, take her first steps and says her first words.

“It hurt me every day that I missed that time with my daughter,” said Strong, who has been in jail six times before. “That’s what you miss the most when you’re in – your kids.”

Sunday is Father’s Day, and a coalition of local community activists want to raise awareness about the plight of many families who won’t be able to celebrate the special day together.

The activists say too many of the hundreds of inmates in the county jail are there unjustly, because their monetary bail is disproportionate to their alleged offense. Records provided by the Alachua County Sheriff’s Office showed that 408 of the 729 people housed in the jail on June 5 were unable to pay their bail. That means they must remain there until their case is resolved.

To combat the problem, the coalition began fundraising online on May 13 for what they are billing as a Father’s Day Bailout. They aim to raise $20,000 by Sunday, with the hope of freeing as many as six fathers from the jail by posting their bail on Monday morning.

At 10 a.m. Monday, organizers said, 200 people will attend a rally outside the jail to protest monetary bail. The group will begin then to fundraise for a second bailout at the jail on Wednesday, which is also Juneteenth Day, the annual commemoration of the end of slavery in the former Confederate States after the Civil War.

Panagioti Tsolkas, an organizer for the Campaign to Fight Toxic Prisons, said forcing people to pay money bail for any offense – given the presumption of innocence until proven guilty – was unfair.

“It’s a punishment before you get convicted,” Tsolkas said. He added, “Leaving people locked up before they even get a trial is a way to rig the system against them.”

Beyond Gainesville, other cities and organizations have addressed the issue.

National Bail Out hosted its third annual Mother’s Day fundraiser in May. The organization freed 100 black mothers from over 35 U.S. cities and raised an extra $1 million to free more.

In February 2018, Philadelphia voted to reduce its use of money bail, following Washington, D.C.’s example of freeing 90% of defendants pretrial since 1991.

Florida law states that money bail should be a last option for defendants who do not commit dangerous or violent crimes. But Scott said judges often begin with bail, instead of alternatives such as GPS monitors and release on recognizance, commonly known as ROR.

“People assume somehow it makes communities safer to have bonds,” she said. “But there’s no logic behind that.”

Coalition organizers said incarcerating people charged with a minor offense – even for just a day – needlessly exposes them to violence behind bars or the loss of their children, jobs or housing.

One organizer, Tyra “Ty Loudd” Edwards, 49, was arrested in 2007 for driving with a suspended license. Edwards said she needed only $100 for bail but didn’t have the money, being a single mother of two working for a manufacturing company. She was held for two days, missing work and pay, which made it harder for her to pay her resulting court fees.

“The humiliation, the time away from my daughter and son – that’s why we don’t need money bail,” Edwards said. “It’s just too much.”