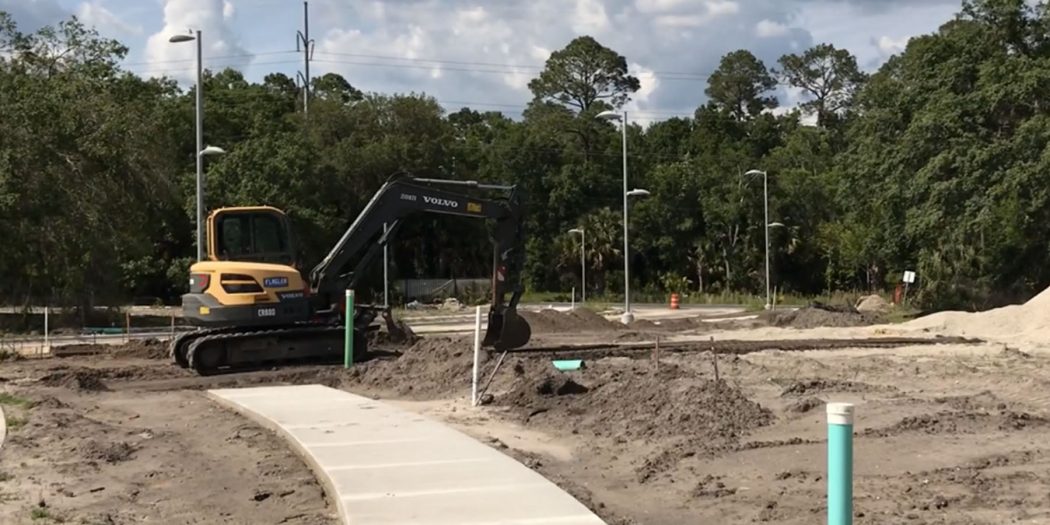 “On a personal note, it’s really nice to get this project and hopefully see it through to the end,” said Daniel Gil who became the Heartwood project manager in August 2018. Site construction is scheduled to finish by June. (Jessica Curbelo/WUFT News)

At least there wouldn’t be a barren lot next door anymore.

It was a small consolation for Irma Dorsey Shareef as she looked in the direction of the Heartwood project. It could’ve been a grocery store instead, she said. The neighborhood needed a nearby grocery store.

Instead, the lot located at 1717 SE 8 Ave. in East Gainesville is slotted to hold 34 new homes, 11 of which will be affordable housing.

According to Heartwood project manager Daniel Gil, the site construction will be done by June.

At first glance, it doesn’t look like much is going on at the 15-acre site. The street looping around the neighborhood is still covered in dirt, but Gil said asphalt will be laid down in the next couple weeks. Almost everything remains dirt at this stage, but the ground on the home sites has been leveled to make a smooth foundation for the houses to come.

Light poles have gone up along the street, but there’s no power yet. In the next couple months, Gainesville Regional Utilities will finish the electrical work. There are curbs, gutters and some sidewalks, but they end abruptly. It’s strategic, Gil said, waiting for the houses to be built first.

“We don’t want to lay sidewalks and then have trucks come to build the homes,” he said. “They’ll drive over the sidewalks and break them, and then we later have to come in and pay more money to do the work again.”

Sewer infrastructure leads to a retention pond on the side of the neighborhood. Gil said the pond and the wetlands mitigation area will take in any stormwater and treat it, helping ensure Heartwood won’t flood during storms. Landscaping will happen in the next few weeks with trees being planted alongside the historical trees Heartwood is named for.

“Heartwood will be a symbol of growth and a catalyst for more investment in the area,” Gil said.

The Community Redevelopment Agency, in charge of the project, has a lot of things to look forward to in the next two months. After $2.7 million, the CRA is almost ready to get the word out on how to buy one of its homes.

Not all 34 homes will be built at the same time, Gil said. Rather, they’ll be built as buyers line up and are approved.

Concerns from those already there

Dorsey Shareef, who’s lived in the neighboring community since 1964, hopes that the black community will not be pushed out. Heartwood is being built on the site that formerly had the Kennedy Homes, a historically black neighborhood that was destroyed in fires in the 2000s. The heritage trees in Heartwood, which are protected by city regulations, are the remains of the original neighborhood.

“I’m glad to see the neighborhood come up,” Dorsey Shareef said. “I just hope it doesn’t get too sky-high that black people can’t afford it.”

While she’s glad that something is being built on the empty land, the 66-year-old resident does think the space and money could’ve been better allocated. There are existing houses in the community that need repairs, Dorsey Shareef said, and businesses such as a grocery store would’ve been a nice addition.

“But,” she said, “it’s OK that they’re building houses as long as they’re affordable.”

According to Gil, the listing prices for each home will be between $159,000 and $220,000. There are multiple floor plans available, but each shows at least three bedrooms and two bathrooms.

Eleven of the 34 homes will be sold through Gainesville’s Department of Housing and Community Development. The listing prices will be similar, Gil said, but buyers can receive down payment assistance and other subsidies to make the homes more affordable.

Heather Swanson, president of the Gainesville/Alachua County Association of Realtors, said the prices seem reasonable considering the size and condition of the homes. Typically, she said, houses that are in a lower price range are smaller, not as energy efficient or not move-in ready like the Heartwood homes should be. “Move-in ready” means that the Heartwood homes are new and shouldn’t need any repairs like a new roof or renovated kitchen the way cheaper and older homes sometimes do.

“A lot of people can’t afford the house and then the repairs afterwards,” she said.

Swanson, who’s practiced real estate in Gainesville for 14 years, said houses in Heartwood’s price range tend to go quickly, and there is a shortage of them. If the houses turn out to be affordable for the community, she said it could be a good model for the future.

Greg Thomas and Carlos Hill, friends and residents of the neighboring community, are hopeful. Not only does Heartwood fill the empty space the Kennedy Homes left behind, but the new project may also bring business to the community. They said new houses and new residents could potentially beautify and diversify the neighborhood.

“It makes the community look better,” Hill said. “I’m glad they’re putting something of significance in our community.”

There is one concern. Thomas said he’s worried that the addition of homes like Heartwood could make the property taxes and prices of existing nearby homes go up.

“If prices go up,” he said, “there goes the neighborhood.”

Multiple people living nearby expressed concern about being able to afford their homes if property taxes were to increase.

Swanson said Heartwood should not directly affect the values of surrounding neighborhoods because the homes from one area to the next are not comparable. Gainesville runs in “pocket neighborhoods” that, while near each other, have different values.

Property taxes are a combination of the value of the home as well as the millage rate. Swanson said that city commissioners vote on the rate during budget planning this time of year, which can affect the overall tax regardless of whether the home’s value changes.

Still, it could influence other factors that lead to raised prices.

“We find that when newer homes are built or when homes are repaired, then the neighbor wants to fix theirs, too,” Swanson said.

If neighbors are inspired to renovate their homes, its value and taxes start to go up.

“When that happens, it’s usually that the whole area is improving as well,” Swanson said. “You want whole communities to start improving. You want people to feel good about the community and invest back into their homes.”

Heartwood has a lot of potential for the community, she said, but it’s only one step. If jobs aren’t available for people, it doesn’t matter what the price of the homes are. People still won’t be able to afford it. Swanson said affordable housing works best if job opportunities are there, too.

“We want to be able to have opportunities for everyone,” she said. “We want everyone to have the opportunity to purchase a home.”

Jessica is a reporter for WUFT News who can be reached by emailing news@wuft.org or calling 352-392-6397.
Previous Animal Services’ Promotes ‘Sweet 16’ Tournament As Creative Adoption Incentive For Clay County
Next Joining The Family Business: How The Mayor Of Hawthorne Came To Be