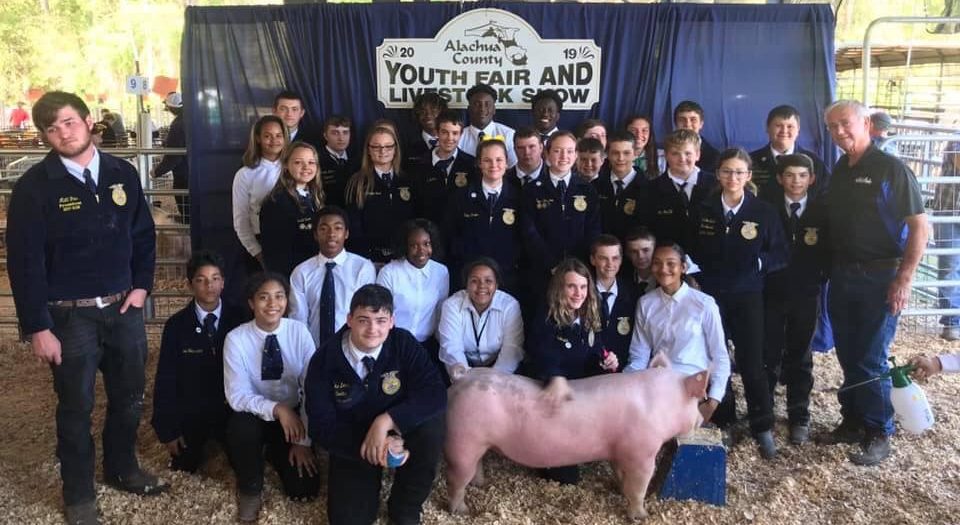 Members of 4-H and the National FFA Organization pose with their prize pig. (Photo courtesy of Matthew Surrency)

How Pigs And Cows Saved A School

This time last year, Hawthorne community members did not know if Hawthorne Middle/High School would remain open. Years of failing grades had put it in jeopardy of being turned into a charter school or closed down for good.

Now, not only is it open, but it has revived an agriculture program that is helping to keep students’ grades up.

Principal Daniel Ferguson, a Gainesville native, has been with the school for two years. He had been principal for only a year when the school learned it might get shut down due to House Bill 7069, which states failing public schools in Florida face closure or new management.

Instead of shutting down, the school re-opened its agricultural program fall 2017.

Out of  349 students at the school, 126 of them participate in the agriculture program. The program requires a 2.0 GPA, so students work to keep their grades up.

The strides these students made helped the school bring up its grade from a D to a C, which allowed it to stay open, he said.

The community pitched in to help donate animals, supplies for building pens, and money so that the program could get up and running as soon as possible. Some donors gave as much as $100 at once.

“The community wanted it back,” Ferguson said. “The parents of the students participated in the program when they were here, and everyone is happy to see that it’s back.”

The school has stables in the back and several acres of land so that it can keep all its animals on-site.

This isn’t just a couple of cows either. The program has 33 pigs, five goats, two rabbits, eight cows and is working on getting chickens for next year. It also has a land lab where the students work with soil and gardening.

“Our students are so proud to be a part of this,” he said. “They all wear their 4-H jackets proudly around school, and it makes them excited to come to school.”

4-H is a youth development program administered by the National Institute of Food and Agriculture. Members from ages 5-19 partake in hands on learning to develop agriculture skills they can continue to use even after they graduate.

The students have a great deal of responsibility. They buy their animals, solicit sponsors if they need help to pay for the cost of the animal and keep daily logs to track their animal’s health.

Students can keep any money they make from their sales and several reinvest it in buying their next animal. Pigs can cost about $1,800, and cows can cost upwards of $2,500.  Other students save up the money for college applications or paying for college tuition, Ferguson said.

“Part of the program is teaching them the business of agriculture,” he said. “They go through business courses that we have and food nutrition courses that they can get certified in.”

Michael Cassels, head of the agricultural science program, said he has seen several students improve their behavior and grades throughout the program.

“I had one student who had been removed from school a few times and didn’t get good grades, and this year he got the highest scores he’s ever had and is in advanced math because he was worried about his GPA not being high enough to participate,” Cassels said.

It’s not unusual to see Cassels and the students hanging out in the barns after school. At least three days a week, they stay after classes to clean pens or tend to the animals.

“Teachers always tell me they haven’t had any problem out of our kids,” Cassels said. “They have a great deal of discipline and pride, and they don’t want to mess up their chance to participate.”

Forty-one students participated in the most recent agricultural exposition, the Alachua County Youth Fair and Livestock Show. Students show their animals at these expositions and can auction them off. They brought one grand champion rabbit, two reserve grand champion heifers and four winners in the swine division.

They checked in to the exposition at 8 a.m. and didn’t leave until 9 p.m. or later for five days straight, Cassels said.

“Many of our kids camped there. Most of them were taking care of their animals before I even got back in the morning,” he said.

Heather Carroll’s two children both participate in Future Farmers of America (FFA) and 4-H. She and her husband were both in FFA when they attended Hawthorne Middle/High School in the ‘90s.

Her son Sam is in sixth grade and has been showing swine for four years. He started in 4-H in the third grade and has now become the leader for the middle school chapter.

The family owns Carroll’s Farm Supply and More, a store that proudly writes on their website that they support Alachua County 4-H and Hawthorne FFA.

“As a mom, I’m always excited watching them,” Carroll said. “Sam really gets into watching for the judge and keeping his pig walking. He really gives 100 percent while showing in the ring.”

Sam said he has a lot of fun learning about animals and getting to raise pigs at school.

“My favorite part is the showmanship with my pig,” he said. “Getting to participate in the exhibitions is so much fun.”

Josephine is a reporter for WUFT News who can be reached by calling 352-392-6397 or emailing news@wuft.org.
Previous ‘Take This Seriously,’ Judge Tells Man Charged In Theft of Santa Fe Zoo Animals
Next Reading Program Boosts Kids Into Literacy