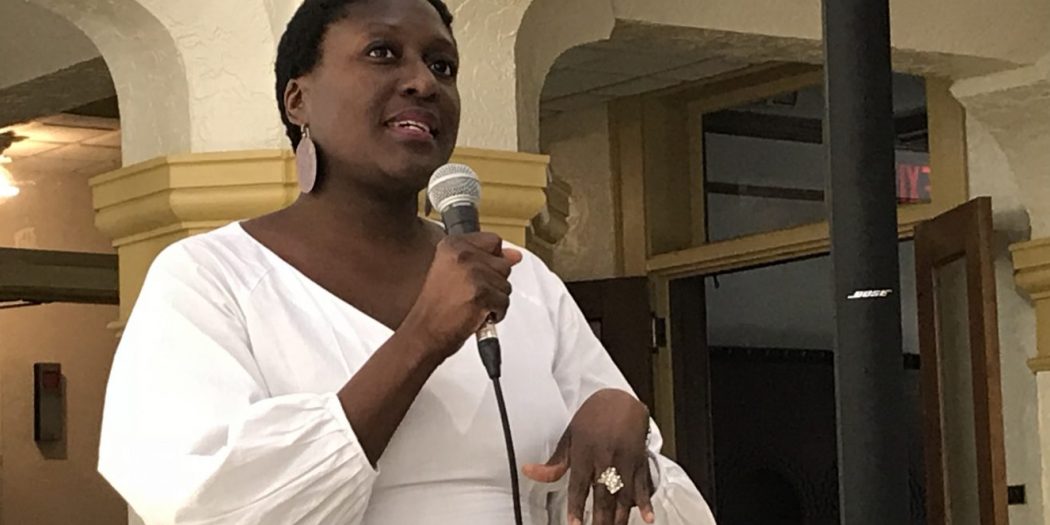 People scribbled on notepads and pamphlets. Short interactions were whispered across round tables. The speakers at the front of the Historic Thomas Center’s atrium kept presenting even while the audience considered their ideas.

About 40 community leaders gathered in the Gainesville center Friday afternoon. Alachua County and Gainesville officials, school board members, representatives for non-profit organizations and others learned about strategies that would put their community in charge of plans for issues such as affordable housing and displacement.

On Saturday, the Community First Summit will continue at the Springhill Missionary Baptist Church from 10 a.m. to 2 p.m. The workshop is open to the public. Gainesville City Commissioner Gail Johnson, one of the organizers, said childcare will be provided to allow as many people as possible to attend.

The summit is sponsored by the Lydia B. Stokes Foundation, Greater Duval Neighborhood Foundation, United Church of Gainesville Racial and Social Justice Committees, Community Land Trust, the Shimberg Center at the University of Florida and the City of Gainesville. Of the money funding the events, Johnson said the city provided $500.

Johnson said she and her “partner in community” Anna Prizzia, director of the Field and Fork Program, began planning the summit after visiting Self Help Credit Union in Durham, North Carolina.

Self Help Credit Union is a certified Community Development Financial Institution. Adelcio Lugo, a Self Help regional director, said this means the institution isn’t held to strict criteria when giving out loans. Lugo said Self Help, focused on community development, provides loans and services for potential homeowners and community organizations.

“Our mission is to create and protect ownership and economic opportunity for all but especially for people of color and minorities,” he said. “Basically, everyone that’s been left out of mainstream financial institutions.”

On Friday, Lugo presented Self Help’s community-first model, which encourages neighborhoods and local organizations to develop relationships and be involved in plans. Prizzia, an organizer of the summit, called it a model of self-determination.

“A lot of times, our institutions tend to craft plans and ideas and then share them with the community,” Prizzia said. “In this model, the community members are actually at the table for the crafting of the plan. They can have the power to determine their own destinies and their own futures.”

Prizzia said the community will be able to participate in a mock example of how the model works on Saturday.

Alongside Self Help, representatives from North Carolina’s Marian Cheek Jackson Center spoke about how the community-first model impacted Chapel Hill’s Northside. The center is one of projects Self Help is involved in.

Senior Director Hudson Vaughan spoke about four categories of strategies meant to develop neighborhoods such as the historically African-American ones found in the Northside. The categories are retention, transition, attraction and balancing the market.

Within these categories, the center offers home repairs, advocates for property tax mitigation, keeps track of at-risk homes, attempts to attract diverse families into the neighborhood and works to prevent more houses from being converted into student rental homes while still improving the relationship between university students and other residents.

“When community leads development, development can be a powerful thing for communities,” Vaughan said, “but when development leads community, it never works out the way you think.”

Carla Lewis-Miles, board member for the Greater Duval Neighborhood Association and neighborhood revitalization coordinator, hopes the model will be established in Gainesville. She said she’s seen Self Help speak twice, but this is the first time she’s seen the Marian Cheek Jackson Center.

“They come from a community that looks like ours,” Lewis-Miles said.

While touring Gainesville neighborhoods, center representatives commented on similarities. Lewis-Miles said having the center at the summit served as an example of what Gainesville could be.

Andrew Meeker, manager for the Community Redevelopment Agency, said the summit was a huge step forward in bringing organizations and people together for a common goal.

“I want Gainesville to be a desirable place for people to either stay in or move to,” Meeker said.

Jessica is a reporter for WUFT News who can be reached by emailing news@wuft.org or calling 352-392-6397.
Previous Mar. 22, 2019: Afternoon News in 90
Next Judge Gloria Walker Makes History With Her Investiture To Florida’s 8th Judicial Circuit Court