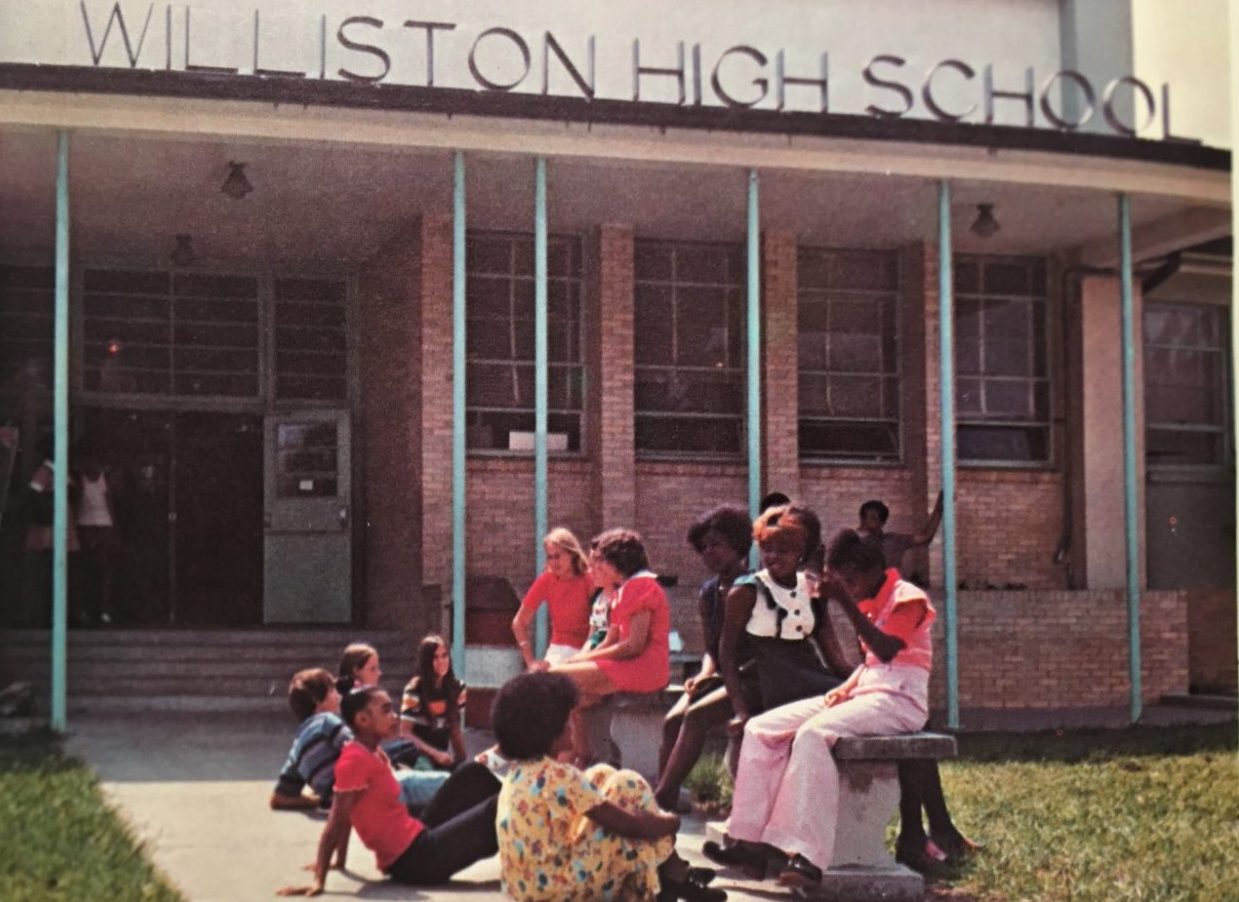 Students gather in front of the original Williston High School in 1974, obtained from the school year’s corresponding yearbook. Photo contributed by Cookie King.

In late February, the marquee in front of the old Williston High School bore one last message as residents of the community prepare to bid farewell to the school many once attended: “Goodbye WHS I’ll miss you!”

Levy County Schools Superintendent Jeffrey Edison said he doesn’t know who was responsible for the message. But the message likely reflects a feeling many in the community share.

After months of negotiations, the Levy County School Board voted unanimously Tuesday to accept an offer to sell the former Williston High School property.

The school board accepted an offer of $1.25 million from BluRock Development LLC and both parties have signed the official contract with the 10-day closing process now underway.

The school board had been in negotiations with this developer since November 2018 to sell the 11.54-acre property, 427 W Noble Ave.

Cookie King, the real estate broker for the sale, said there have been two contracts between BluRock Development and the school board.

However, after seeing further interest from potential tenants, BluRock Development resubmitted the current contract and offer.

Edison said the accepted $1.25 million offer was a counter to the board’s original asking price of $1.5 million.

The former Williston High School has been vacant for a little more than two years, since the new Williston Middle High School opened, and was put on the market in March 2017.

Edison said the building’s age and condition, coupled with the financial costs of a renovation, persuaded the school board to replace the original high school. Williston middle and high school students now attend the $35 million dollar Williston Middle High School, 350 Robert Philpot Way. This is the third year students have been in the new building.

Williston Middle High School is a grade 6-12 school, sharing the campus between the grades.

With the former location of the high school vacant after construction was completed, the board had the opportunity to sell the property.

“It’s surplus property we needed to get rid of,” Edison said. “If we sell it, we won’t have to keep it and maintain it.”

Edison said the money from the sale of the former school must go into the school district’s capital projects fund, meaning it will be put toward future building projects and other ventures.

No plans or projects are in place for how the board will use the $1.2 million. The school board will have to approve any future use of the money, he said.

King, a graduate of the former Williston High School, has emotional ties to her alma mater’s location but she understands that the school board could not afford to maintain the building and sees the opportunity in developing the location for the community.

Joeseph Schuemann, president of BluRock Commercial Real Estate, said that BluRock is excited to come to the Williston area. BluRock hopes to create a shopping development on the 11.5-acre land, though they could not give specifics on potential tenants.

“We are working with some restaurant users and retailers, and hopefully a grocery,” Schumann said. “We hope to do a nice grocery-anchored shopping center.”

At least one Williston business owner is hoping development of the old high school site does not include a grocery store.

Paul Robertson, owner of the Williston Corner Market just feet from the former Williston High School, said for a grocery store to be developed on that property would negatively impact his business.

“You really need to sell the store items to keep in business,” he said, explaining that more competition with a grocery store could cause his sales to take a hit.

“You really have to have the right kind of deals to have people stop in,” Robertson said. “Another grocery store would just really make it difficult.”

Williston’s only chain grocery store is Winn Dixie, located less than half of a mile from the old Williston High School.

With the old school set to be demolished for the development of the shopping center, Edison noted that the school board wants to keep the former school’s memory alive.

“There have been a lot of folks who have graduated out of there,” he said. “We have an alumni group that we have been working with, doing different things to bring a lot of the old school into the new school.”

The alumni association was involved with some of the graphics and designs of the new school as well as in selecting memorabilia from the old school to be placed in the new school, Edison said.

Even if the developer does not bring a new grocery store to the old high school location, King said, the Williston community is longing for something of value to replace the school many residents once attended.

“Who wants to see their old school just fall into disrepair?” King said. “We don’t want that. Everyone just wants to have something good going there that is going to grow Williston’s economy and be part of our community.”