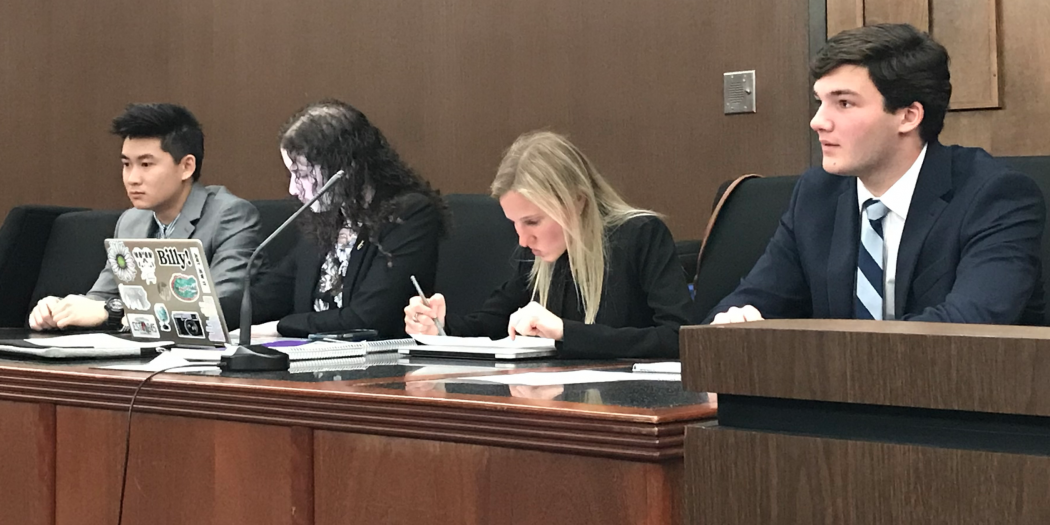 University of Florida Students Put a Literature Case to Trial

The “Strange Case of Dr. Jekyll and Mr. Hyde” was put to trial Wednesday afternoon at the Alachua County Family and Civil Justice Center.

And Jekyll was found guilty.

Ten University of Florida students presented their case on whether they believed Jekyll guilty of first- or second-degree murder, wrongful death and gross negligence.

In the end, Jekyll was found guilty for the count of second-degree murder and liable for gross negligence.

Attempting to have his students read the material and write exceptional papers, attorney and UF instructor Bernard O’Donnell facilitates a mock criminal trial to give life to literary criminal cases in an actual courtroom. The idea for the class, “Law and Literature,” began 20 years ago when O’Donnell was an English instructor at Florida State University.

“If you don’t have a reason to read them, why read them?” he said. “This is how to encourage everyone to read and write.”

Once he was hired as an instructor at UF in the early 2000s, he presented the idea for the class and believes it has been a success ever since.

Before the trial began, students presented pretrial motions that O’Donnell decided to decline or accept. For example, he ruled the defense’s motion to strike a passage in which Jekyll drank the elixir a second time, turning him into Hyde, as hearsay.

The prosecution argued that due to Jekyll’s internal debate and his knowledge of Hyde’s wicked personality, he didn’t create the potion to further science, but instead wanted to let Hyde’s evil tendencies out.

The prosecution did not comment. The defense retorted with involuntary intoxication and dissociative identity disorder (DID).

Although Jekyll was aware of Hyde’s violent personality, he didn’t know Hyde was going to murder Sir Danvers Carew.

“It was out of his control to stop Hyde,” said Anna Dincher, second-year economics student at UF.

Dincher was an attorney and expert witness for the defense.

O’Donnell informed actual members of Alachua County’s court system that the class is required to examine and write about legal elements that were not addressed in the novel. They would then need to analyze the text and draft arguments — like attorneys do.

“Basically, to create your own sequel of the work,” he said.

Although the trial wasn’t real, students did have to present their arguments in front of a judge and five jurors.

The judge was played by O’Donnell and two of the jurors were played by actual Alachua County judges, Meshon Rawls and Kristine Van Vorst. The other three jurors were Marynelle Hardee, an attorney at her practice (Hardee Legal), Creed Greer, program director for UF’s writing program, and Mark Law, director of the University of Florida Honors Program.

Van Vorst was impressed by the mock trial and felt students were well prepared, professional and courteous.

“The defense had exceptionally tough facts that they had to deal with,” she said. “I think they did the best they could with what they had.”

Attempting to be active with law students, Van Vorst said this was an opportunity to interact with undergraduate students and help them understand what it’s like to be in the court system.

After the verdict was presented to the court, the jurors offered advice to the students so they may improve their presentation for their next mock trial.

Especially when closing a case, students will want to review the law and cover each element so the students may convince the jury to side in the favor, Greer said to the class.

“Don’t be afraid to go slowly to march us through the whole thing a couple of times,” he said.

At one point, a student used the term “murder,” Hardee said. She informed the students that the term has a specific legal term which is that someone is guilty.

“If you mean ‘the person who killed somebody,’ you should say that instead,” she said. “Don’t use a word that has a specific legal meaning, because that’s an admission — essentially — that the guy did it.”

Though this assignment does make students understand the material, Jonathan Tucker, a first-year economics student said the assignment puts students on a hot seat.

“If you don’t do it in class, you can kind of get away with it,” he said. “But when you’re out here being asked questions by the jury and Professor O’Donnell, you can get exposed… on the spot.”

Alexandra is a reporter for WUFT News who can be reached by emailing news@wuft.org or calling 352-392-6397.
Previous Job Fair Helps Fill Labor Hole Left After Alachua County Stopped Employing Prison Inmates
Next Tyler Tenbrink Sentenced Up To 15 Years In Prison For Shooting Near UF Campus After 2017 Richard Spencer Event