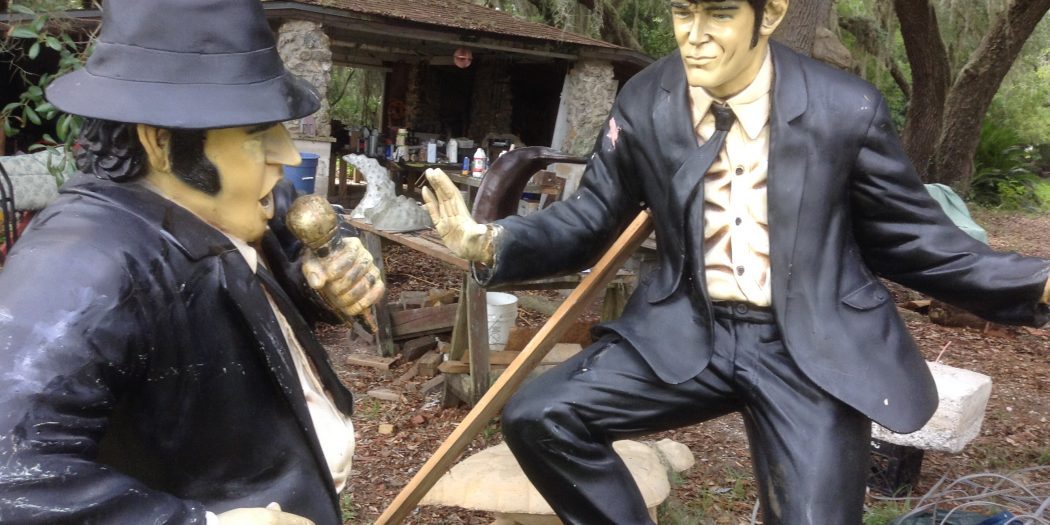 Jake and Elwood wait to be refurbished in sculptor Pat McGee’s yard. The pair of worn statues was bought by Gene Howlett in 2014 from a bar in Palatka and then restored by McGee. “It’s quite an effort to repaint them,” McGee said. (Photo courtesy of Pat McGee)

Where In The World Is John Belushi? The Disappearance Of A Melrose Landmark

The Blues Brothers have split up. At least the two in Melrose have.

For nearly five years, the two statues greeted visitors outside of an old art gallery along State Road 26 in Melrose. The sculptures depicting the likenesses of John Belushi and Dan Akyroyd’s characters Jake and Elwood from the 1980 film “The Blues Brothers” have become a local landmark for residents and people passing through the town.

About two months ago, one of the soul men went missing. Now, only Dan Akyroyd’s statue remains. The sudden disappearance of one of the brothers has prompted many in the small community to ask: What happened to John Belushi?

Sue Sinclair, a Melrose local, passes by the statues each morning during her 7:30 walk. One November morning, she noticed something strange as she crossed in front of the art gallery: a single Elwood without his partner. A little later, she went to the consignment shop next door and spoke to the owner, Diane Adkins.

“Sue came in one morning and told us,” Adkins said. “She walked in and said ‘He’s missing. Jake’s missing!’ ”

Rumors surrounding the nature of the mysterious disappearance began to spread immediately. Michèle Karahalios, a local painter who works in Melrose Bay Art Gallery, believes someone may have stolen it.

“We used to have an alligator bench in the front, and that got stolen,” Karahalios said. “Since Melrose is a sleepy little town, I think that sometimes invites people to steal things.”

Bob Bird, another local artist, said his theory is that somebody from Starke came up and stole the statue.

Others, like artist Davis McGlatherly, said the John Belushi effigy was likely thrown away because of its age and weathered appearance.

Despite the many rumors, most of the locals can’t say they know for certain what happened to the tuxedoed figure. Concerned members of the community are not able to ask the gallery owner about the statues out front because the building is completely empty.

Artisan’s Way, the gallery which housed the dancing duo, opened in 2012 after the previous gallery at that same building lost crucial funding and closed down. Three years ago Artisan’s Way suffered a similar fate and was forced to shut down. Now the gallery is locked up and covered in dust, most of the interior art and furniture removed. The only sign of life is the lonely echo of a radio somewhere inside the building, tuned to a talk show channel. The owner of the gallery, Gene Howlett, no longer lives in Melrose and most of the community has lost touch with her.

Howlett, who still owns the building where the statues stood, has been secretive about the status of the sculpture. When reached for comment, she offered vague responses and said it was not stolen.

Pat McGee, a 66-year-old local sculptor, refurbished the statues when they were first bought several years ago from a bar in Palatka. The statues get their fair share of abuse, McGee said. People come through, take pictures with them and climb all over them. He said Howlett contacted him about fixing the sculptures.

McGee knew exactly what had happened to John Belushi’s character that fateful morning when he disappeared.

McGee had spoken to Howlett and a caretaker for the old art building. The old fiberglass statue with a rebar skeleton lost its foundational support and collapsed. No theft. No conspiracy. After nearly five straight years of dancing, John Belushi needed a break.

That leaves the question of where the statue is actually located. Well, it turns out Jake never left the building. The figure is stored in a back room of Artisan’s Way, listening to talk radio and waiting to be refurbished.

McGee said he will repaint the statue for free within the coming weeks. Jake isn’t the only one getting a makeover. McGee says both of the brothers will be repainted and re-cemented in front of the old gallery by the summer.

McGee also said the owner of Artisan’s Way plans to reopen the gallery at limited times to host musical venues and create new interest in the location. By the summer,  Jake and Elwood should be back to entertaining guests.

Until then, the people of Melrose will continue to feel the absence of John Belushi.

“We’d like to see Jake come back,” Sinclair said.

Sam Thomas is a reporter and photographer for WUFT.
@@SamuelThomas___
Previous When The First Jewish Utopia In The U.S. Was Founded In Micanopy
Next Feb. 20, 2019: Morning News in 90