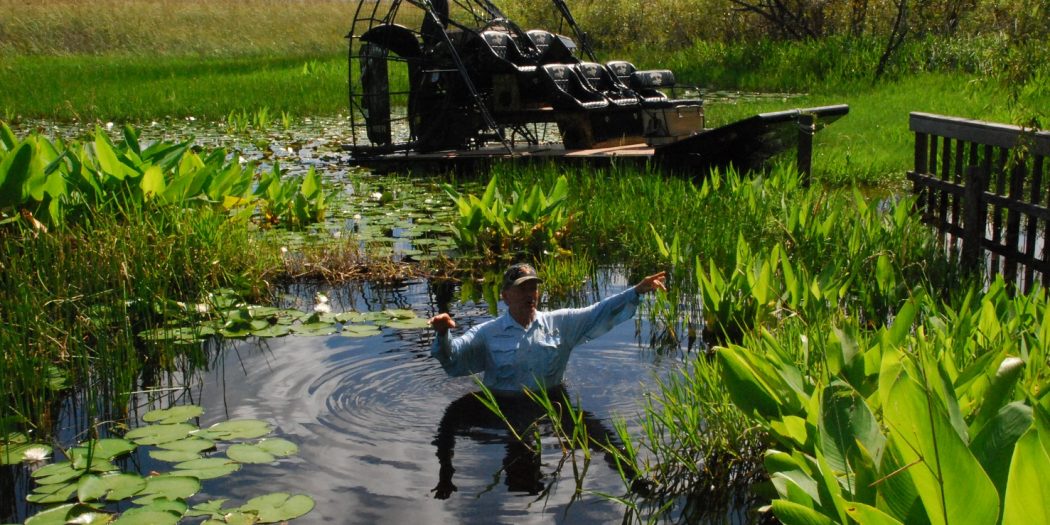 Home / Environment / He Was Just Appointed To The South Florida Water District, But Who Is “Alligator Ron?”

He Was Just Appointed To The South Florida Water District, But Who Is “Alligator Ron?”

An emergency alert rang through Davie Elementary, a wooden two-room schoolhouse built so long ago that it’s now a museum. Ron Bergeron was in the first grade.

“There was a Florida panther on the school grounds,” Bergeron recalls with a chuckle.

Surely, the school would shut down until the panther cleared the area, he thought. But this was the Everglades, after all.

“They let us go out to look for it,” he said, laughing at the thought of six-year-olds chasing South Florida’s only wild cougar. “Times have changed.”

Nearly 70 years later, Bergeron still remembers this first backwoods moment and thousands more like it, that have shaped him into the “gladesman” he is today.

“Sometimes I think I was born in a ‘gator cave and crawled out of it,” he said.

And as of this week, Bergeron is the newest guardian of South Florida’s waterways.

Shortly after his election as Florida’s next governor, DeSantis called for the immediate resignation from every sitting SFWMD board member during an announcement from Stuart, FL. DeSantis said the board needed a “fresh start” and requested their resignation immediately.

DeSantis then turned his focus to water experts and local Floridians with expertise in wetlands, marine ecosystems and Florida’s water future, asking for their acceptance to the board.

“He came into my office so much, I nearly had to put a traffic light in there,” Bergeron said. “I was very impressed with his interest in the environment and economic growth.”

But before the appointment to the board, before serving as a Florida Fish and Wildlife commissioner under two separate governors, and before establishing a renowned land development company amassing millions of dollars, he was just Ron from Davie, a small agricultural town with only 500 citizens.

Bergeron was born in 1943 but likes to joke that he entered the world one hundred years before that. With the spirit of an old Everglades pioneer, a minute hardly goes by when the eighth generation Floridian isn’t reminiscing about “old Florida.”

State Road 84 — a trodden dirt lane in the 1940s — led to a small turntable bridge. On the other side was Davie, the only place Bergeron and his family ever knew. The memory is still sharp in his mind.

“I was very blessed to see Florida before the boom, before flood control, before air conditioners that made people comfortable,” Bergeron said. “But we didn’t have a lot.”

Bergeron watched his father, Percy, and his mother, Dorothy, build their first home out of freight boxes collected from Port Everglades. His family made its money from Davie Grocery, a quaint country store with more places to tie up a horse than park a car.

“I can remember how blessed that I was to be raised by great parents,” Bergeron said. “They instilled in me to always be honest, be responsible, appreciative and kind. Because kindness is free.”

Bergeron has passed these lessons on to his six children, nine grandchildren and seven great-grandchildren, who are scattered across South Florida like the river of grass they have learned to adore. He hopes to bring their experiences with him to the SFWMD board, he said.

He tries to give his family the same rustic experiences he had as a child, Bergeron said. A life chock-full of cowboys, wildlife and, most importantly, love.

“I remember the first time my grandfather put me in an airboat, I was just 3 years old,” Bergeron said. His grandfather, a game warden for the Everglades, knew all the best places to watch the sunset. “He brought me into the natural world.”

After graduating from Stranahan High School in 1962, Bergeron took his love for the outdoors and the $235 in his pocket and bought a 1943 Ford Ferguson — his very first tractor.

Bergeron “never turned down a job” and would sometimes sleep under his tractor after working 18-hour days mowing pastures and harvesting fruit.

Kali Parrish has worked as a personal secretary for “Alligator Ron” for almost 11 years. She said the same work ethic that he had as a child is still present today.

“No matter the topic, he takes the time to listen to any caller that tries to reach him,” Parrish said. As a commissioner with the FWC, he would field hundreds of calls about dolphins, plants and other wildlife.

Parrish met Bergeron at a rodeo as she was desperately looking for a job, she said. When she later came to his office looking for an opportunity, he hired her right away.

“He’s just a really good person like that,” she said.

Bergeron’s life partner, aptly named “Alligator Ali”, agrees. Ali Waldman, born and raised in Cuba and a graduate of Nova Southeastern Law School, first crossed paths with Bergeron in 1988. Waldman represented Bergeron in a real estate transaction and, after a 12-year professional relationship, the rest was, as they say, history.

“I asked her to go out into the beautiful Everglades and frog hunt, which I thought was very romantic,” Bergeron laughed. “I think the date went pretty good. What’s a better place to be in than the Everglades with the sun setting? Doesn’t that sound romantic?”

Never married, Bergeron and Waldman raised six children together. He said they brought their children up the same way Bergeron was raised: in airboats, mud and swamp water. He hopes that these experiences, backed with the support of his family and partner, will lead to a successful tenure as a SFWMD board member, he said.

“We have a wonderful life together because we enjoy the cowboy world,” Bergeron said. “She’s a ‘gladeswoman and she loves every minute of it.”

Bergeron paused and stared out from his airboat into the Everglades. Beside him was Guy Harvey, one of Florida’s most famous artists.

As the men stood there, two separate lives seemed to collide. One, a life of wetlands and swampy sawgrass. The other, a life of oceans and estuaries, acrylic paint and boat rides.

After this meeting in the Everglades, the two decided to work together to save all of Florida’s waterways, both marine and estuarine, Bergeron said.

Bergeron hopes he can bring his network of environmentalists into his appointment with the South Florida Water Management District, he said.

“I’m tremendously honored for this appointment, and I have spent most of my life trying to save the Everglades,” Bergeron said. “We have to protect our surroundings so we do have a good quality of life for many generations to come.”

To Bergeron, he feels his years in the Everglades will lead to an impactful tenure as a SFWMD board member, he said. He believes DeSantis is making a true effort to appoint “experts” in their respective fields.

“DeSantis’ success will come from appointing people that have the expertise to the mission,” Bergeron said. “And I’m impressed with how aggressive he is with living up to his promise.”

Max is a reporter for WUFT News who can be reached by calling 352-392-6397 or emailing news@wuft.org.
Previous Feb. 6, 2019: Afternoon News in 90
Next UF Revises Graduation Commencement For Fall 2019 To Combined-College Ceremony

Face Mask Use Won’t Be Enforced With Arrest Or Search, Gainesville And Alachua County Leaders Say

Part of the first phase of Florida’s reopening came over the past 10 days, as local governments like Ocala’s began to reopen city offices.