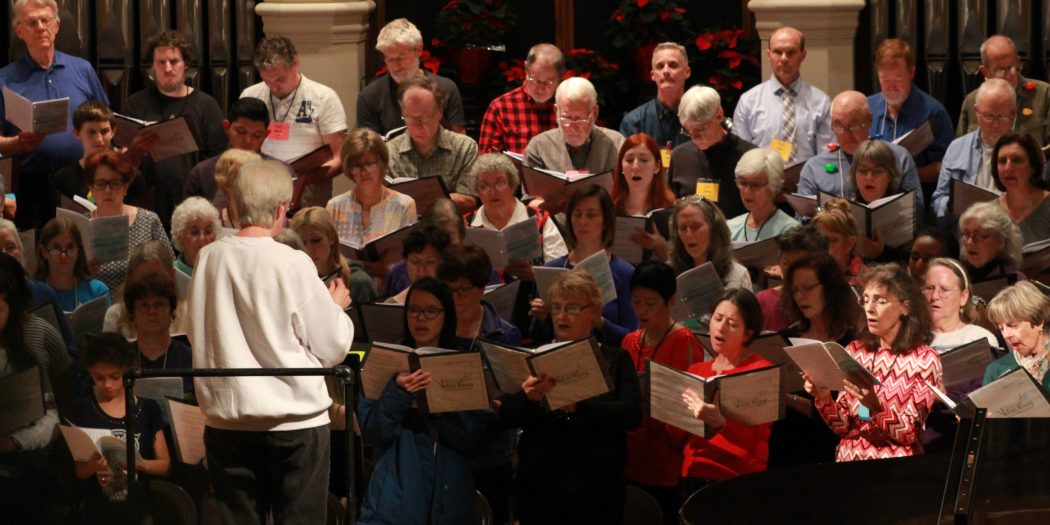 When Ruth Lewis, a musician in Gainesville for four decades, decided to start an intergenerational chorus in 2013, she hoped for at least 30 people at the first meeting.

Seventy-two singers ages 10 and up joined the Voices Rising Community Chorus that day.

“It just blew us away,” said Lewis, 65, of Gainesville, the group’s artistic director and conductor. “We weren’t prepared for that many.”

Lewis submitted assorted video clips from prior chorus performances to Bridges Together, a nonprofit organization based in Sudbury, Massachusetts, sponsoring the 2018 Kraemer Intergenerational Story Contest. She said chose those that had the most interaction between its oldest and youngest members.

“We always try to feature them in at least one piece – just the kids,” Lewis said.

That was not lost on the judges as they viewed submissions from more than 50 groups, said Andrea J. Fonte Weaver, executive director and founder of Bridges Together.

“We appreciated all of the generations singing together,” Fonte Weaver said of seeing Voices Rising performing “Dry Bones,” a classical spiritual arrangement by Mark Hayes. “Not just standing next to each other but actually interacting and getting to know each other.”

Danny Geis, 75, of Gainesville, who joined Voices Rising three years ago and is now a board member, said the chorus was “very delighted” and “tickled pink” to win the competition.

Lewis is a former director and minister of music at Unitarian Universalist Fellowship of Gainesville. She said a need for community is why so many have joined Voices Rising.

Gail Keeler, 63, of Gainesville, joined after attending its first performance with a friend.

“We sat up in the balcony and we heard them,” Keeler said, “and we were just like, ‘We love this. It sounds so great. They look beautiful.’”

Jai Crane, a 13-year-old student at Alachua Learning Academy, joined Voices Rising when he was 10.

“I stayed with the chorus mostly because of me liking to sing,” Jai said. “It has been pretty good because I have been actually learning how to sing better rather than not singing at all.”

About the intergenerational aspect of the chorus, he said: “I think that’s really cool. I’ve always liked talking to and singing with and just meeting people of all ages. It’s one of those things where you get to learn from people older than you. You also get to talk to people that are younger than you and teach them things that you learn from the older people.”

Daina Perez-Fletcher, 10, will sing with the chorus in her first concert this weekend. She attends Boulware Springs Charter School.

“I really like being in the chorus because it is really fun,” Daina said.