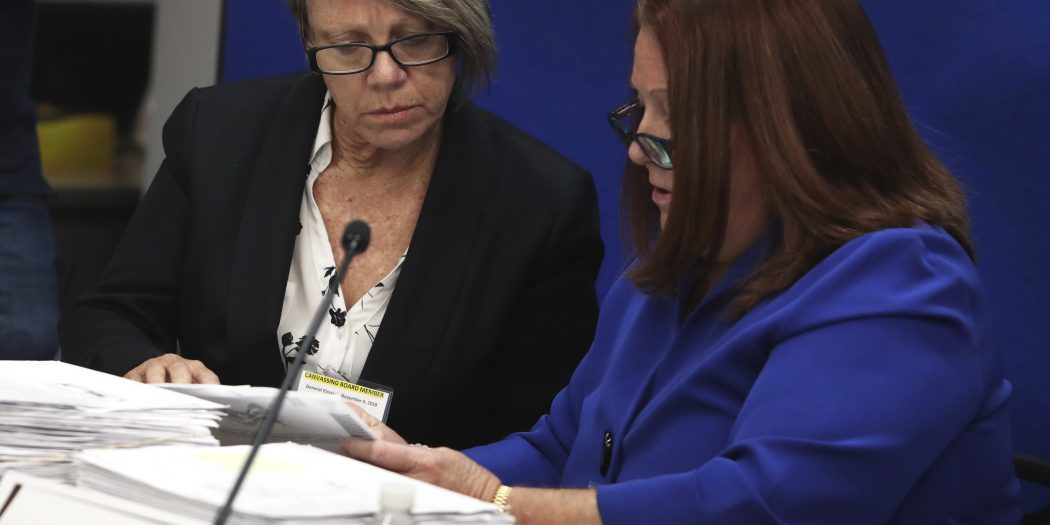 There has never before been a statewide recount for an election in Florida, but that could change this weekend.

As unofficial results continue to be tallied by Florida’s 67 supervisor of elections, three races have fallen below the threshold to trigger a recount.

Florida law mandates a machine recount when election results come within 0.5 percent points. A manual recount is required if results are within 0.25 percentage points.

Florida’s race for governor between Democrat Andrew Gillum and Republican Ron DeSantis is currently separated by .46 percentage points as of Thursday evening.

Gillum conceded the race Tuesday just before 11 p.m., but the race grew tighter and within the margin for recount as largely Democratic counties Broward and Palm Beach in South Florida continue to count provisional, vote-by-mail and Election Day ballots.

“We’re hopeful that every single vote will be counted in this race, and that way all of us can walk away feeling extremely confident about what each and every one of us did,” he said.

Florida’s race for the U.S. Senate between Republican Rick Scott and Democratic incumbent Bill Nelson has dropped to 15,127 votes separating the candidates, a difference of 0.18 percent, which will automatically trigger a manual recount.

In a press conference Thursday night, Scott announced that he’s suing both Broward and Palm Beach election officials for a lack of transparency.

“Every Floridian should be concerned there may be rampant fraud happening in both Palm Beach and Broward counties,” he said.

Election officials failed to provide him with ballot numbers, he said. His lawsuit calls on the public records law to gain him access to the ballot-counting process in those counties.

“I will not sit idly by while unethical liberals try to steal this election from the great people of Florida,” Scott said.

President Trump took to Twitter soon after, writing the following.

Law Enforcement is looking into another big corruption scandal having to do with Election Fraud in #Broward and Palm Beach. Florida voted for Rick Scott!

“We await the court’s resolution of that case and whether or not those ballots wind up being added or not,” Elias said.

Elias said he’s had to tell many past hopeful candidates during the recount process that they probably came up short either way, but this race is different.

“In the end of the day, when all eligible voters have their votes counted and counted accurately, the fundamental truth that we’re going to learn is that more voters voted for Sen. Nelson than for Gov. Scott,” Elias said. “There isn’t anything that Gov. Scott and his billions of dollars are going to be able to do about that.”

He said the reason he’s so optimistic is because of the sheer number of ballots that haven’t been counted yet, specifically in Palm Beach and Broward counties. Marking issues and machine issues were likely the cause of it, he said.

His team also noticed an unusual undervote pattern in Broward where voters didn’t vote for senator, but voted for lower-level races on the ballot. 24,763 more voters appeared to have voted for governor, but not for senator.

“I can’t think of another instance where you have fewer votes for the Senate candidates than down ballot candidates,” he said. “There simply isn’t an explanation for that.”

The Sun Sentinel reported that some people said “they don’t remember seeing the Senate race on their ballots or that they almost missed it.”

He said they will also monitor Miami-Dade’s handling of mail-in ballots because of its historic disproportionate rejections that have affected Latino, African Americans and Hispanics.

“There’s no natural explanation for that,” he said. “We’re not going to stand by and allow people to be disenfranchised due to administrative prophecies that disadvantage minority voters.”

“As the important work of counting every last legal vote continues, it has become clear that the electoral process has worked and Nikki Fried will serve as Florida’s next Commissioner of Agriculture and Consumer Services. Today’s victory, while belated, is a victory for all of Florida as Nikki will be a strong advocate for everyone and will fight to protect our environment, our healthcare, and consumer rights.”

“This election is coming down to the wire! If you cast a provisional ballot we NEED you to contact your supervisor of elections by the 5 p.m.,” he said in the post.

The Alachua County canvassing board will begin reviewing 550 provisional ballots tomorrow at noon and continue until completed, according to TJ Pyche, director of outreach for Alachua County supervisor of elections.

County canvassing boards across the state have until Saturday at noon to tally the final unofficial results. Secretary of State Ken Detzner will then finalize the results and call for necessary recounts.

Cat is a reporter for WUFT News and Fresh Take Florida who can be reached by calling 954-657-3385 or emailing cgloria@ufl.edu.
Previous Nov. 8, 2018: Afternoon News In 90
Next George Starke Jr. Celebrated For Ending UF’s Segregation In 1958