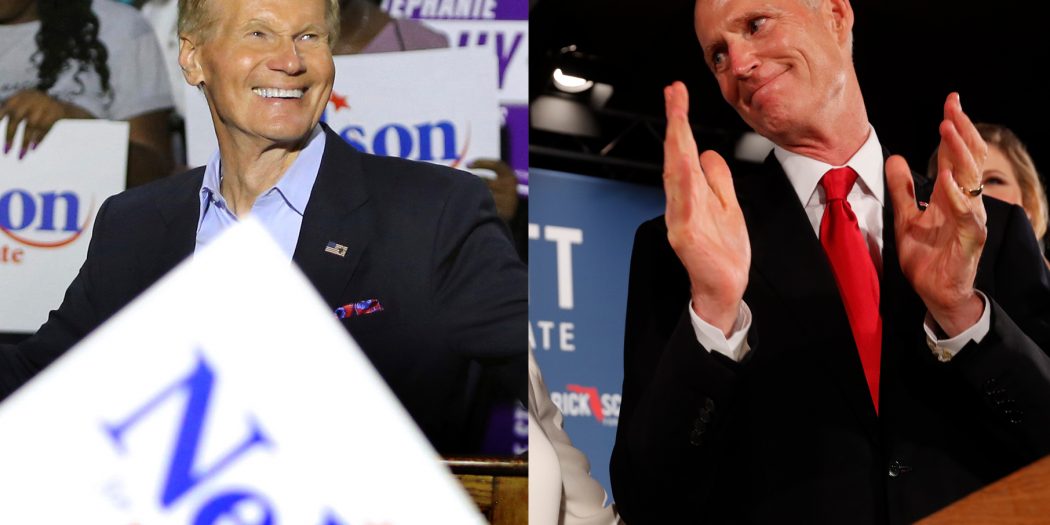 Florida’s U.S. Senate race is headed for a recount.

By early morning Wednesday, with 100 percent of precincts reporting, Republican Gov. Rick Scott’s margin had dropped to 34,537, or four-tenths of a percent. That was within the threshold for an automatic recount under Florida law.

“We are proceeding to a recount,” Sen. Nelson said this morning, in a statement.

Nelson’s campaign said the next step is for the 67 county supervisors of elections to recheck the total tally and reach out to voter’s whose ballots were not counted. Unofficial returns are due to the state Division of Elections by noon Saturday from county canvassing boards.

All recounts must be conducted before noon Nov. 15, when the official returns are due from each county canvassing board.

Scott dismissed the need for a recount.

“This race is over,” said Chris Hartline, Scott spokesman. “It’s a sad way for Bill Nelson to end his career. He is desperately trying to hold on to something that no longer exists.”

Original post: Scott declared victory in the U.S. Senate race in Florida, one of the most important and closely watched in the nation.

With 99 percent of votes counted, Scott was ahead by 55,428 votes, or just over one-half percent with some votes outstanding in Palm Beach County, where Nelson was doing well.

Scott declared himself a winner in the early hours of Wednesday at his watch party. Nelson’s chief of staff, Pete Mitchell, said the campaign would have more to say later in the day to thank his supporters and said the reported outcome was “obviously not the result Senator Nelson’s campaign has worked hard for.” The threshold for a recount in Florida was one-half percent or less.

“Now that this campaign is behind us, that’s where we’re going to leave it,” Scott said. “At least the campaigns I’ve been involved in are divisive and they’re tough and actually way too nasty. But we’ve done this for over 200 years, and after these campaigns, we come together, and that’s what we’re going to do. Americans, come together.”

Nelson, the incumbent centrist U.S. senator since he was first elected in 2000, had been leading by such a small margin in pre-election polls that the race was widely considered a toss up. Across the U.S., Republicans kept control of the Senate even as Democrats were poised to take over the House.

Key players from both sides, including President Donald Trump, former President Barack Obama and Sen. Elizabeth Warren showed up in Florida to try to generate support for their candidates leading up to Election Day. Scott, who chaired the super PAC backing Trump’s 2016 presidential campaign, kept some distance from Trump during the Senate race amid concerns about Trump’s favorability in Florida.

During the campaign, Scott criticized Nelson’s record over the past three terms, describing him as an “empty suit” who has done little for Florida in the Senate. Nelson said Scott was untrustworthy when it comes to financial conflicts of interest in office and criticized Scott for what he said was his dishonest politics.

The two candidates clashed on issues of immigration reform, gun control, the environment and transportation infrastructure during their first and only debate. Both blamed the other for issues facing Floridians. The second scheduled debate was postponed and eventually canceled following Hurricane Michael.

Nelson supported Medicare expansion in Florida, lowering drug costs for older Americans and “protecting Florida’s unique environment and tourism-driven economy.” The latter comment was a reference to a ferocious red tide that had devastated Florida’s Gulf Coast for a year when Scott was governor. The toxic algae killed countless dead sea turtles, dolphin and other marine life on beaches and spread to the Atlantic coast, closing beaches. At campaign stops, Nelson called his opponent “hashtag Red Tide Rick.”

Scott endorsed term limits on U.S. senators, replacing the Affordable Care Act with an alternative that still allows coverage for pre-existing conditions and introducing stricter federal policy regarding Latin American countries with oppressive regimes such as Cuba, Venezuela and Nicaragua.

The Senate race was remarkably expensive even by modern political standards.

Scott, the Florida governor who estimated his net worth at $232.5 million last year, personally contributed more than $51 million of the $67 million raised through Oct. 1 by his campaign, according to federal election filings. Nelson’s campaign raised $26.7 million through Oct. 1, including $311 from Nelson himself, filings showed.

Scott, 65, won election as Florida’s governor in 2010 and was re-elected in 2014. He was barred from a third term by the state’s term limits. He co-founded Columbia Hospital Corporation, which later merged with another company to become the largest private for-profit health care provider in the U.S. During his time as CEO, the company was convicted of what was then the largest health care fraud case in U.S. history when the Justice Department negotiated a $1.7 billion fine for Medicare fraud. Scott resigned as CEO in July 1997, just after the investigation became public.

Nelson, 76, served in the Florida House of Representatives from 1972 to 1978 and served in the U.S. House until 1991. He was one of only a handful of congressmen to travel into space, when he flew as a payload specialist aboard the space shuttle Columbia in 1986. He lost a 1990 election to become Florida’s governor, prior to winning his U.S. Senate seat a decade later.