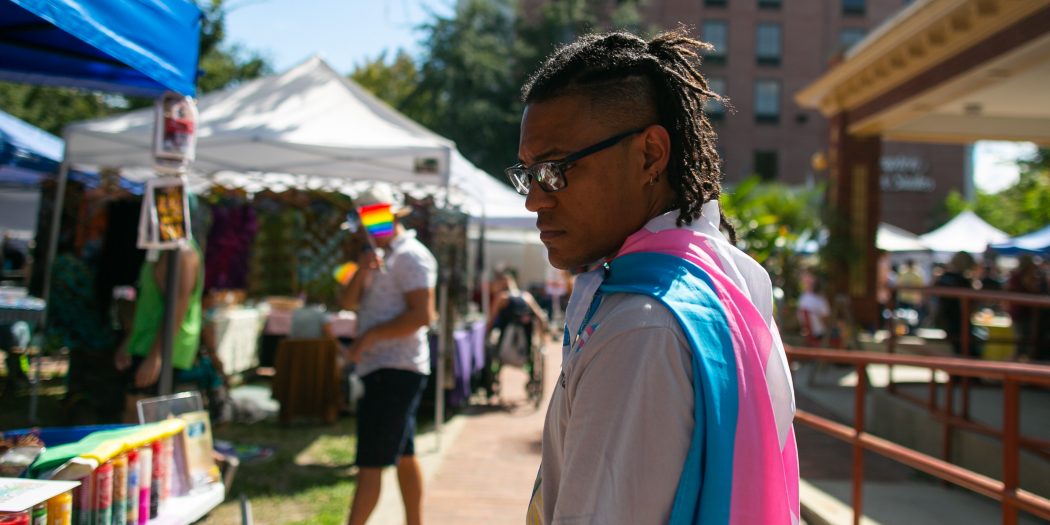 The Transgender Man: Kane Barr Votes For the Voiceless

Kane Barr’s eyes wander as he recalls a moment nearly 19 years ago when he wondered if he would ever be accepted.

He was a voiceless middle school student at the time. He identified as male even though he was born female.

He heard George W. Bush say, “I think marriage is a sacred institution between a man and a woman,” during a debate for the 2000 presidential election.

Too young to vote on LGBTQ issues, Kane felt depressed and silenced.

Today, 30-year-old Kane helps children who feel the same way he did. As a transgender man of color, he can relate to transgender children in Gainesville’s community.

Kane spoke at a Listening Post Event last spring that featured four members of the community who shared their transgender experiences. He talked about seeking his mother’s acceptance.

“A booklet of trans-related poetry, it’s how I came out to my mom,” he says. “It was my transition plan, bringing her into the fold.  I wanted to be seen anew; for her to see me as her newborn son.”

Syraj Syed, a narrative counseling specialist, says that Kane’s story caused him to question his own feelings about identity and the cultural norms of his Indian background.

“[Kane] having the courage, the wherewithal, the ability to persevere through moments of struggle that were far heavier than anything that I experienced, it was very encouraging,” he says.

Kane also spoke on a panel for Gainesville Equality Youth with his roommate Jillian Goldstein. The panel was a platform for queer adults to talk to teenagers about sexuality and gender.

“Instead of just being able to talk among themselves about what’s going on in their lives, they get to ask someone who has a lot more years of experience and wisdom,” Jillian says.

Kane says his best friends and some of his teachers helped him while growing up, so he intends to do the same for children in Gainesville.

Kane is bi-racial. His mother is African American and his father was white, but people labeled him as black. He felt out of place as a child living in Connecticut.

He and his twin sister Monique were two of the few children of color at their elementary school. After his eighth birthday, he moved to Fort Lauderdale where he experienced culture shock.

“I’d never been in a room full of people that looked like me,” he says. “It was really, really scary.”

He eventually adapted, and later embraced the diversity. When it was time for college, he studied agriculture science at Florida A&M University, a historically black institution. Now, Kane works as an agricultural researcher studying fruit flies for the government.

Kane voted for the first time in the 2008 election as a Democrat. When Barack Obama won, he was ecstatic.

“It was just a spectacular event,” he says. “Everybody was running out of the dorms onto the streets.”

Kane thought back to his grandfather who never thought the U.S. would elect a black president.

“This is history,” he says.

The Obama administration worked to recognize the legal concept of gender as an individual’s choice rather than one’s assigned sex at birth, broadening rights for people like Kane.  The current administration may attempt to undo those strides.

On Oct. 21, the New York Times reported a leaked memo that discussed the Trump administration’s attempt to redefine gender to be “a biological condition determined by genitalia at birth.”

Kane says it doesn’t move this country backward, rather it urges people to go out and vote.

“(Trump) saying things like that is a catalyst for people to move into action,” he says.

But Kane says it affects children who are listening, just as it affected him at 11 years old.

“If we’re not allowed to have equal and inclusive climate and atmosphere communities, we’re harming people,” he says. “Society pays for that, pays for people that are using substances as an escape.”

Kane has been researching deeper into politics and parties over the past four years. He says polarization and divisiveness present within both parties has caused him to shift his definition of being a Democrat.

“Being closed off and narrow-minded and tunnel vision are not productive, not only on a personal level and individual level but on a national level,” he says.

Jillian is a reporter for WUFT News who can be reached by calling 352-392-6397 or emailing news@wuft.org.
Previous The Caregiver: Healthcare, Wage Gap Issues Hit Close To Home For Sharon Burney
Next The Student Socialist: Stetson Cooper Views Medicare, Minimum Wage As Top Themes