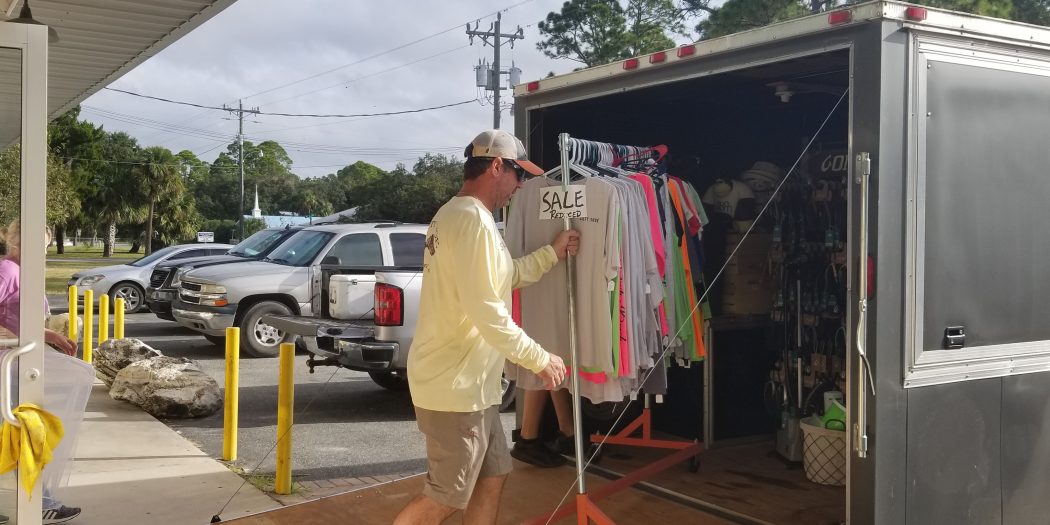 Horseshoe Beach City Councilman Tom Cushen loads a U-Haul with merchandise from Salty Shoe Apparel. With an expected storm surge upwards of 8 feet, he's hoping to save as much of it as possible. (Matthew Arrojas/WUFT News)

In a town of 150 permanent residents, everybody knows everybody, and with a Category 3 hurricane on the way, that means everybody helps everybody, too.

Horseshoe Beach City Councilman Tom Cushman helped move merchandise out of his girlfriend’s store early Tuesday morning. About a half-dozen other volunteers helped prepare Salty Shoe Apparel in case of flooding, a common sight around the town that day.

“Horseshoe Beach is a very resilient community,” Cushman said. “We saw how this community came together during [Hurricane] Hermine. Everybody helps everybody.”

His priority is to get as many things out of the store as possible ahead of the anticipated storm surge from Hurricane Michael. The National Hurricane Center said that some coastal regions can expect 8 to 12 feet of storm surge as result of Michael, which is expected to become a Category 3 hurricane before it makes landfall. This potentially dangerous storm surge is the reason Horseshoe Beach Mayor Talmadge Bennett called for a mandatory evacuation of the town Monday. He said Hurricane Hermine, a Category 1 storm, devastated Horseshoe in 2016, and he hopes the town will fare better this time. He said they are more prepared and seasoned, even though Michael is likely to be a stronger storm.

Bennett said most of the town has already evacuated to places like Cross City. He assumes, however, some residents will stay despite his warnings.

“A few people will ride it out,” he said. “We always have a few brave souls. I don’t know if you’d call them brave or not, but they’re willing to try.”

Next door to Salty Shoe Apparel is the Shrimp Boat Restaurant. According to owner Jill Futch, it’s actually the second Shrimp Boat. The original restaurant flooded during Hermine in 2016, and she and her husband had to completely relocate.

Futch said her home just across the street also flooded. This time she’s not taking any chances and is packing a U-Haul to the brim with furniture and other valuables. Helping her is another small army of volunteers, some of them family members and others friends from the neighborhood.

Futch’s cousin Koltem Music, 13, was one of those volunteers. He said he’s confident in the town’s ability to bounce back from Hurricane Michael just like it did after Hermine.

“I think we’re going to do all right, because last time we did alright, too,” he said. “If everybody does like we did last time, we’ll be alright.”

As Futch’s U-Haul continued to fill and Cushman finished packing up Salty Shoe Apparel, a steady stream of cars towing trailers, mobile homes and boats continued to trickle out of Horseshoe Beach, away from the impending havoc. Nevertheless, the residents still there were unabashedly optimistic.

“We’ve got a good community and we’ll clean it like we did last time a hurricane hit,” Music said.

“I’m pretty confident,” Cushman said. “We’ve been through this one time before. Because of Hermine, we have a lot better idea of what to do now than we did before.”

Mayor Bennett said the people of Horseshoe Beach will persevere no matter what Michael brings.

“The town of Horseshoe has got a really good bunch of folks living here,” he said. “When Hermine hit, which was really a devastating storm, we had this town cleaned up, everything out, all the people helped in about three weeks. We really jumped on it and we’re going to do that again if we have that same level of destruction.”

Hurricane Michael and its predicted 125 mph winds are expected to make landfall on Wednesday.

Matthew is a reporter for WUFT News and Fresh Take Florida who can be reached by calling 786-332-8003 or emailing marrojas@ufl.edu.
Previous Hurricane Michael Is On The Radar, And Some In Gainesville Are Still Recovering From Irma
Next Oct. 9, 2018: Evening News In 90