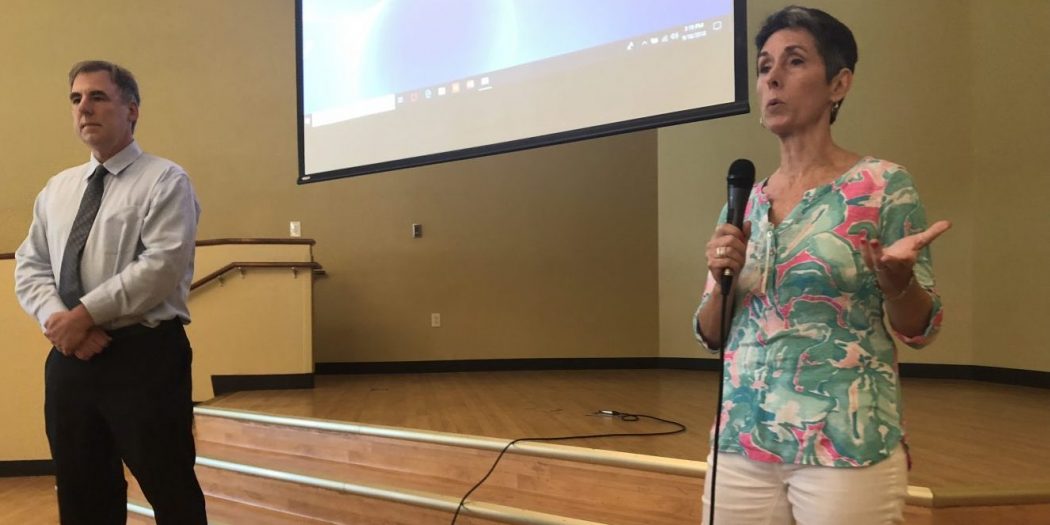 Opposite Viewpoints on GRU Governance Referendum Offered During Community Discussion

With less than two months to go before the November election, two speakers from the Gainesville community took part in discussing the GRU Authority referendum.

On Tuesday afternoon, a packed room of nearly 100 people, mostly seniors, came out to hear a debate between CEO of Infinite Energy and former Chair of the Utility Advisory Board Darin Cook, and former Gainesville City Commissioner Susan Bottcher. They discussed the pros and cons of the referendum and its potential impacts to residents and the community.

“I support the GRU governance referendum for an independent utility board for three main reasons: lowering costs, improving focus and transparency and creating a platform to appropriately serve the city of Gainesville size,” Cook said.

The two-hour debate was held at Gainesville’s Senior Recreation Center, located at 5701 NW 34th Blvd. It is a part of the Civics Classes series — co-sponsored by the Community Coalition for Older Adults and the League of Women Voters of Alachua County. It featured the local GRU Authority referendum titled, City Charter Amendment 1, set to appear on the ballot for Gainesville residents.

President of the League of Women Voters Carol Fernandez opened up the debate by introducing both speakers and their stance on the issue. Cook spoke in favor of the referendum and its initiative to strip the city commission’s role in governing GRU and give that control to an independent utility authority board. While Bottcher strongly argued that the referendum was simply a bad idea.

Right now, the city commission has control of determining rates. And according to Cook, this is a bad idea. He thinks transferring control to an independent authority board made up of qualified members, will benefit the citizens of Alachua County. The board will be composed of nine members who will be appointed by both city and county commissioners.

The referendum will end the city’s ability to govern or make any decisions concerning utilities. Cook feels that utility rates are likely to go down if the referendum passes and grants sole control to an independent board. Bottcher feels that if it passes — the people will suffer.

The last hour of the debate was dedicated to questions from the audience. A total of 12 people took advantage of the time to ask the speakers their lingering questions from the debate. One of those people was Ray Washington, a local attorney, who questioned Bottcher on her role while she was a city commissioner and the chain of events that forced the state legislature to put this referendum before the people. Bottcher intimated that she had nothing to do with the current situation that the city and GRU currently find themselves in.