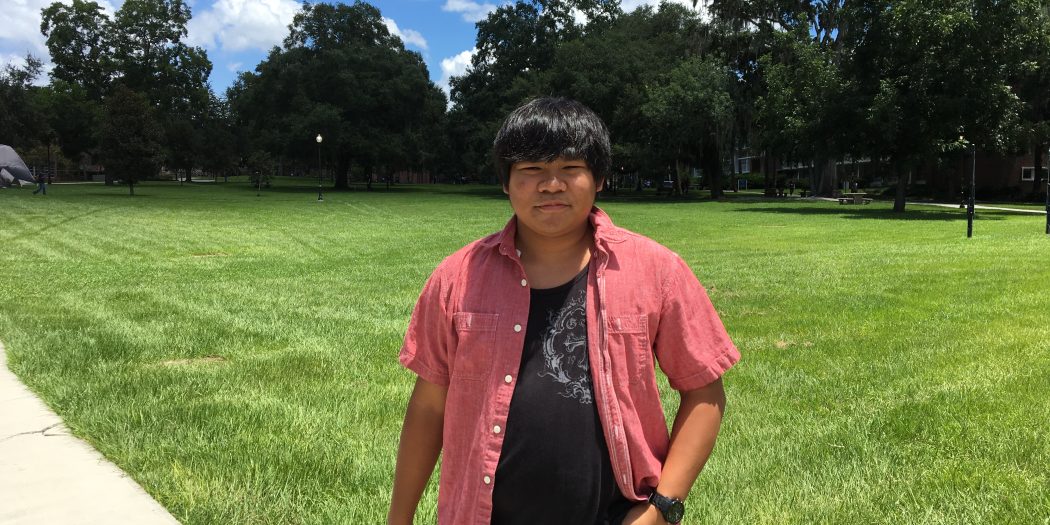 Michael Ortega, a 21-year-old UF student, and his family have experienced utility outages in Starke for the past 19 years they have lived there. Utility issues are just one of the 35 Starke needed to fix as part of an operational audit done of the city. (Catie Wegman/WUFT News)

Michael Ortega and his family have lived in Starke for 19 years.

A junior majoring in both agricultural education and communications at the University of Florida, Ortega, 21, spends his breaks between semesters at home. But he finds it difficult to do school work while at home because of frequent power outages.

“Whenever there’s power outages, it’s really annoying to me,” he said. “It even gets annoying when it’s not fixed within a day.”

Utility cutoffs are just one of the 35 problems found needing correction within Starke’s management performance and internal government controls, according to an operational audit the city received from the state auditor general’s office in August 2014. A follow-up operational audit the state sent the city last month showed that only eight of the 35 problems had been resolved.

Among the other issues that continued to need fixing include uncollected local business taxes, an excessive number of city bank accounts, unauthorized salary increases for elected officials, overtime payment monitoring and utility cutoffs.

City Clerk Ricky Thompson said that since a follow-up audit was completed in February 2016, Starke has been working on fixing the issues – and that only 13 problems remain outstanding.

Thompson said having a limited amount of staff is the main reason it’s taking so long to correct these problems for a city with a population of only 5,400 people.

Greg Centers, a CPA for the auditor general’s office, said there are no legal repercussions for the city if it fails to resolve the issues in the original audit. He also said while the state office does not mandate when a city should resolve its listed problems, the responsibility falls on Starke’s city commissioners, manager and clerk to make sure it does.

“When controls do not operate effectively to safeguard city resources, which are funded in part by citizen-paid taxes, there is an increased risk that such resources may be subject to waste, fraud or abuse,” Centers wrote in an email.

The 2014 audit noted that Starke did not actively pursue collection of delinquent business tax receipts, commonly known as business licenses, which need to be renewed annually. The city also did not enforce late payment penalties.

For the 2012-13 fiscal year, city officials did not collect $31,750 from local businesses that had not renewed their licenses and accumulated late fees. The auditor general’s office recommended that the city implement procedures to ensure collection, but the issue remains unresolved.

According to the 2018 audit, $21,125 in late fees and penalties were not collected during the 2015-16 fiscal year. “City personnel indicated that they did not pursue collection of the penalties because they did not want to discourage businesses from operating in the city,” the audit states.

“Once this is correct,” the clerk said, “it will bring in additional revenue to the city.”

Another unresolved issue, according to the 2018 audit, was unauthorized salary increases for elected officials and pay bonuses for city employees.

Starke’s municipal code sets the salaries of the five city commissioners, the city clerk and the police chief, who are paid base salaries of $12,547, $45,000 and $45,000, respectively, per year.

For the 2006-07 through 2012-13 fiscal years, the people holding these positions were paid a total of $227,807 in excess of the salaries permitted according to the municipal code. The latest audit states that the code has since been properly updated to match the current salary structure.

The city also gave 106 employees a total of $13,224 in safety-pay bonuses in 2011 and 2012. However, no city records approved giving these bonuses to city workers other than firefighters.

When asked whether this issue was corrected, Thompson replied, “Partially.”

Thompson said this unresolved issue “does not impact the city.”

The follow-up audit found that the city was still not disconnecting utilities from customers who had not paid their bills and granting more extensions than two extensions a year.

Customers are allowed a seven-day extension period twice a year to pay their utility bill.

According to the 2018 audit, city personnel said the manual process for monitoring utility disconnections is labor intensive, and that the city has limited staff and resources.

That’s no comfort to Ortega, the UF student who said that his family had always paid their utilities on time, but still saw periods when it would not have utilities for up to five days.

“Sometimes it just scares me,” he said, “because when I go home and have studies to do, I’m like ‘Oh, boy.’”