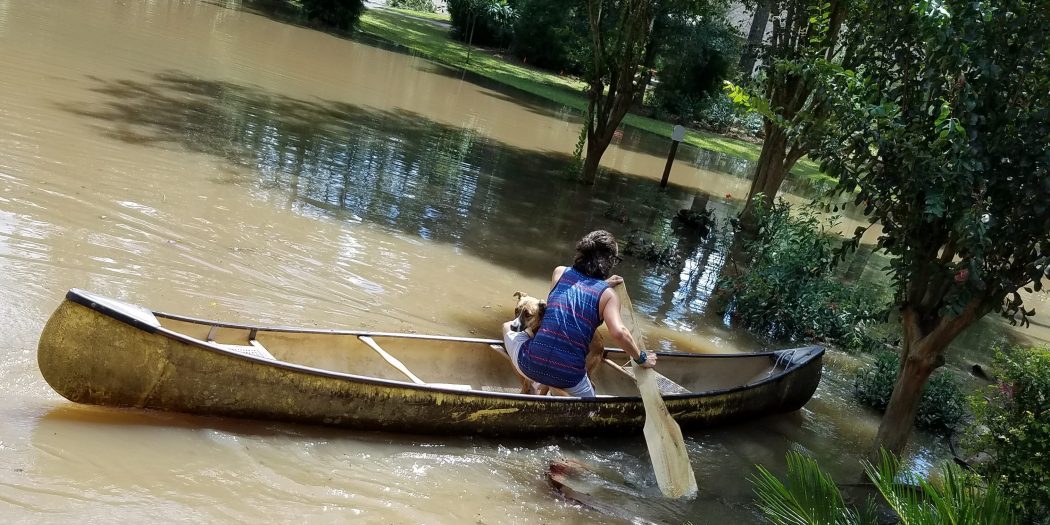 Luisa Pena’s son, Gianni Pena, rode in a canoe to get around the Hills of Santa Fe neighborhood. The flooding was so bad after Irma, that was the only way her family was able to get anywhere, Pena said. (Photo courtesy of Luisa Pena)

In recent weeks, heavy rain storms have caused problems in Alachua County neighborhoods such as Meadowbrook and Bowlan Springs. On Tuesday, members of the Alachua County board of county commissioners discussed setting new rates for the stormwater assessment fee for all residents of the county in order to bring in more funding for projects that will end the flood issues.

The stormwater assessment fee is a fee that homeowners in unincorporated Alachua County pay every fiscal year as part of their real estate taxes that allows the county to manage the stormwater system, prevent pollution, and maintain water quality. The new fee rate that commissioners are discussing would be in effect at the start of the 2019 fiscal year, Oct. 1.

The current stormwater assessment rate for Alachua County residents is set at $30. The proposed raise would bring the fee to $45, which is a 50-percent increase, according to Mark Sexton, communications and legislative affairs director for Alachua County. This fee is used for various stormwater projects around the county, such as cleaning out ditches full of storm water from the recent streak of rain and bad weather, as well as maintenance of stormwater ponds.

While the proposed rates are currently set at a 50-percent increase, the total could decrease. According to Sexton, the commission and board spent the entire summer discussing the fee.

“The primary reason for possibly increasing the rate is because there is a clear understanding that more money is needed for various stormwater issues,” Sexton said.

According to the County Commission meeting agenda, the proposed fee increase would bring in a total of $1.33 million in service charges that are targeted toward various stormwater projects across the county. While the commission is discussing the fee, some homeowners might be not that happy about the proposed increase.

“If you look at that price, a 50-percent increase is a significant hike,” said Mack Chapman, 65-year-old homeowner in Alachua County. “There should be enough of a cushion already for natural disasters that are less burdensome on the homeowner.”

“It’s not right that they’re making me pay all of the damages that should be countywide instead of just the homeowner,” Chapman said.

The current rate for the assessment fee has already helped some areas, such as Newnans Lake and Robin Lane neighborhood, deal with flooding, according to Sexton. After Robin Lane residents expressed frustration with flooding issues, the fee was used for putting in new pipes for the rain water, as well as a high-performance pump.

Residents across many of these affected neighborhoods have come together to form the Flooding Action Committee in an effort to aid with these stormwater issues. Members of the committee include residents from the Robin Lane, Hills of Santa Fe, Meadowbrook and Pine Hill Estates neighborhoods. The committee was put together to find solutions to these issues that would not only help these neighborhoods, but the county overall.

“We’ve been a group of people whose homes have either had floods or severe flooding,” said Joanna Caputa, member of the Flooding Action Committee. “We’re working together, meeting in homes, meeting in the Meadowbrook neighborhood and the community center.”

One of the goals for the committee, according to Caputa, is to get the county to budget money that will address flooding issues that are rampant throughout Alachua County, not just these neighborhoods, as well as appoint a flood advisory committee to aid the county in undertaking these issues.

“We’ve been wanting to appoint a flood advisory committee to help the county with these problems,” Caputa said. “It’s a huge problem for them, and we’ve been working on this for the last 10 months of our lives.”

With some efforts made to improve the situation across the county, the idea for a raise in the fee came from a discussion with public works.

“We considered the idea of raising it after talking to public works,” said Sexton about the fee. “It’s clear, however, that the current fee is not enough for them to catch up and tackle the issues with the water.”

While the county does not see local flooding as a public issue, according to Caputa, she believes that there are benefits to fixing these issues.  She explained that are benefits to the general public, such as stormwater basins that can also serve as public green spaces.

“When you take care of your neighborhood, it benefits everyone,” Caputa said. “These spaces can be used as a park for kids when it’s not flooded, it can be a wildlife habitat or a butterfly habitat also.”

Once the new fee is decided, there will be two public meetings in September. The first will take place on Sept. 11, where the budget gets presented to the public.

Following that, a second meeting will be held two weeks after, on Sept. 25, where the board will discuss reaching an agreement on a budget that will aid in relieving the floodwater issues. Once the board has reached an agreement, the tentative budget that was proposed will become the adopted budget, possibly leading to the increase in the stormwater assessment rate for the county.

Stephen is a reporter for WUFT News who can be reached by calling 352-392-6397 or emailing news@wuft.org.
Previous July 16, 2018: News In 90
Next Judge Rules In Favor of Alachua County Sheriff In Budget Dispute With County Commissioners