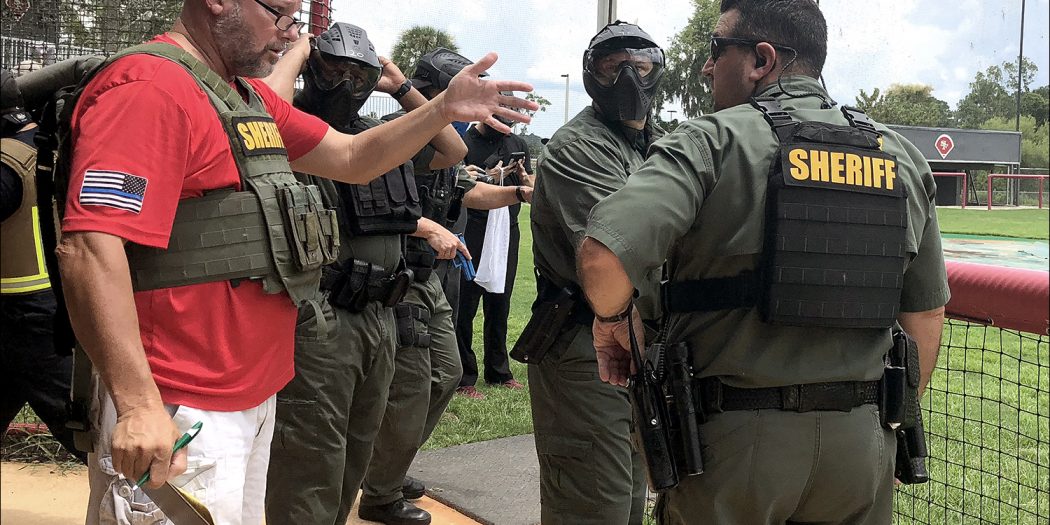 Today began the second week of training and included more than 35 members of both law enforcement and fire rescue. The goal of the new partnership was to provide quicker medical attention to victims by allowing EMTs from fire rescue to enter an active scene with law enforcement before the area is completely cleared.

To ensure safety at the scene, Lt. David Torsell, paramedic with ACFR, said their department is receiving 76 new ballistic-protective vests, one for each person on every truck.

This year’s training began on June 25 and will include eight sessions that are each eight hours long.

Each session is attended by about 30 to 40 training participants, and is broken into two parts: a morning classroom style lecture and an afternoon roleplaying based scenario.

For the second part of the session, participants were divided into groups to clear the building, find all the victims as well as the shooter, and facilitate medical help.

Sheriff’s department Sgt. Charles McCray said the trainings happen yearly, but the settings and scenarios change. They are usually based on events that have occurred recently, in this case the shooting at Marjory Stoneman Douglas High School in Parkland.

“You can watch the news and over and over again these things are going to happen,” said Brett Rhodenizer, ASO spokesman. “So this is about how are we going to change the outcome.”

Lt. Charlie Nahrwold, with ASO, said Torsell has been trying for several years to initiate this type of joint-response program with fire rescue. After attending a FEMA training with Torsell, Nahrwold also realized the advantages.

“I wanted our agency to do that, and I reached out to Alachua County because, when we have something like this here at Santa Fe or anywhere in the city, sheriff’s office is going to show up,” Nahrwold said. “We all have to work together and we need as many assets as possible,”

Approximately 400 to 450 people from ASO, ACFR and Alachua Police Department will receive training.

“This is still a law enforcement scene, and this is a crime scene,” Nahrwold said. “But we’re bringing them in to do what they do best, and that’s treating people.”

Alena Poulin is a reporter at WUFT News and can be contacted by emailing alenarene@ufl.edu. You can follow her on Twitter under the handle @AlenaPoulin and Instagram under the handle @alenarene
@AlenaPoulin
Previous July 9, 2018: News In 90
Next Gainesville City Commission Asks GRU For Different Budget Option Without Rate Increases