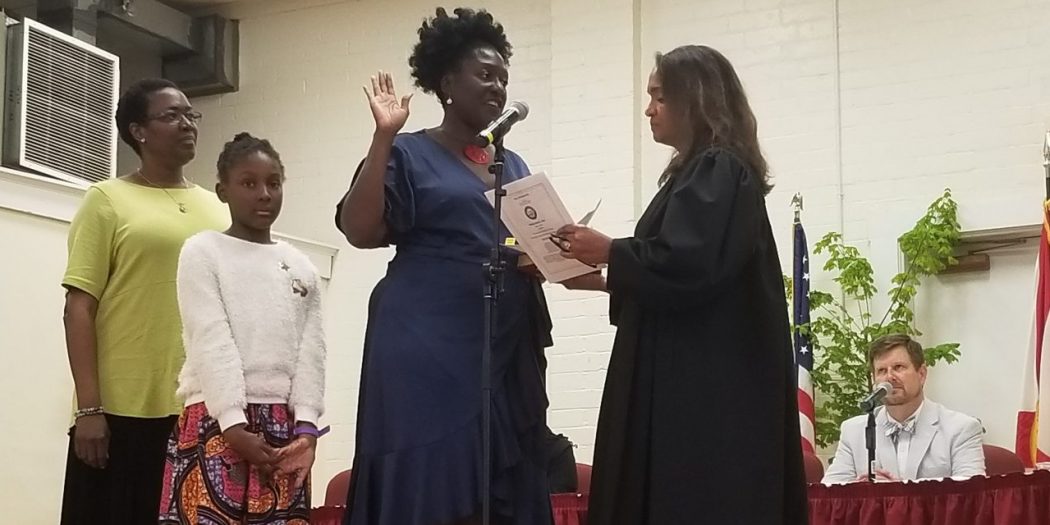 Gail Johnson took the oath of office alongside her daughter Zora, whom she called her inspiration for running for commissioner. (Matthew Arrojas/WUFT News)

Gail Johnson and Gigi Simmons Sworn In As City Commissioners

With the swearing-in of Gail Johnson and Gigi Simmons, for the first time in Gainesville’s 149-year history, two African-American women serve simultaneously on the city commission.

Johnson and Simmons took their oaths at noon on Thursday at the Thelma A. Bolton Center. The moment also marked the first time in the city’s history that a majority of the commissioners come from minority backgrounds, Mayor Lauren Poe said.

Johnson was sworn in as an at-large commissioner, and Simmons became District 1’s newest representative.

Former commissioner Yvonne Hinson said she believes these new commissioners are the first step in creating a more progressive Gainesville where economic disparity is a thing of the past.

“It had me in tears, frankly, that Gainesville is ready for such a change,” she said. “We have pretty much crawled through progress, but this is a quantum leap.”

Simmons said she was ecstatic to be a part of such a monumental moment. She told the story of how a year ago she was working as a greeter for the swearing-in ceremony of the current commissioners. She said that she is honored and blessed to be the one taking the oath of office this time.

Johnson took time in her speech to make three promises to those who supported her.

Johnson added that she needed some promises from her supporters as well.

“This is a relationship — it’s a two-way thing — so I’m also going to ask for you to promise some things,” she said. “One, you’re going to listen. Two, you’re going to show up. And three, you are going to be a part of the change that you want to see.”

As for the historic nature of her swearing in, Johnson thanked many of the African-American women pioneers that came before her for making her victory a possibility. Among those she thanked include Shirley Chisholm, the first black woman elected to Congress in 1968, Ida B. Wells, an early civil rights movement leader, and Sojourner Truth, an abolitionist and women’s rights activist from the 19th century.

Poe welcomed Johnson and Simmons to the city commission. He said he was excited about the prospects of having such a diverse commission that is able to represent the needs of all Gainesville residents.

“This did not happen by accident; this is an outward sign of progress and it’s a day to celebrate and be joyful,” he said. “As much as this day is about the past and the history we have shared, it’s also about the future, and this commission will be judged by the work that we do.”

Matthew is a reporter for WUFT News and Fresh Take Florida who can be reached by calling 786-332-8003 or emailing marrojas@ufl.edu.
Previous Alachua County Supervisor Of Elections Registers Hawthorne Students To Vote
Next Former Gators Coach Rhonda Faehn Out From USA Gymnastics Amid Fallout From Nassar Scandal