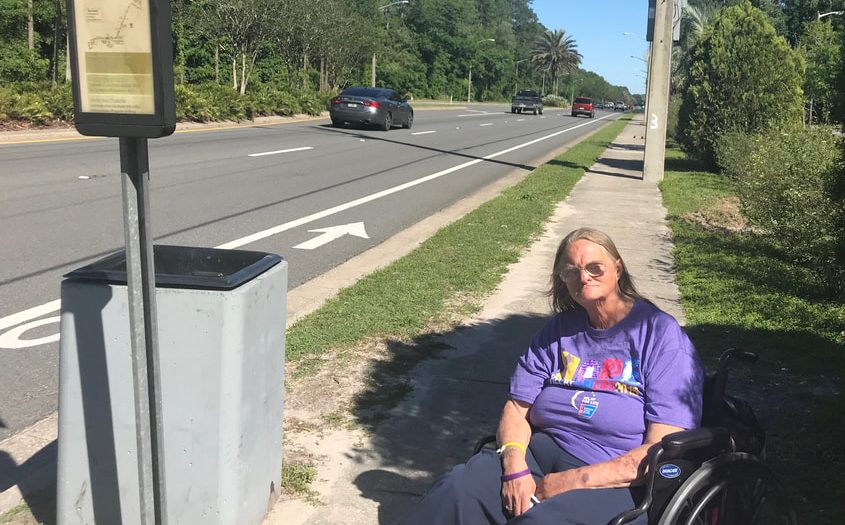 Misty Warden says she has to take a risk with her life everyday to cross the road to the bus stop with her motorized scooter. (Shamarria Morrison/WUFT News)

Misty Warden worries that catching the bus outside of the Grace Marketplace shelter in Gainesville will get her killed.

“I don’t want to get hit here,” said Warden, 61, a wheelchair-bound shelter resident since 2015, as she waited for bus route number 26 at Northeast 39th Avenue and Northeast 28th Drive.

Warden rides the bus regularly to, among other things, get prescriptions at Walmart and visit a doctor for her diabetes. To get to the bus stop, she often crosses the four-lane State Road 222, rather than make her way to the nearest crosswalk, about a half mile away, at Waldo Road.

“One of these times I’m going to die,” she said.

City and county officials have tried for two years to make it so riders won’t have to cross the street. People can get on a bus headed east toward the airport – and ride up to 30 extra minutes before it turns around – or cross over for the westbound bus. Most pick the shorter option.

According to crash records from Florida Highway Safety and Motor Vehicles, a man was hit by a car trying to cross 39th Avenue after getting off the bus in November.

The bus stop is used mainly by people from Grace, Dignity Village – a homeless tent camp – and the Santa Fe Work Release Program. The Metropolitan Transportation and Planning Organization for the Gainesville Urbanized Area discussed the matter at a recent meeting.

Walking to the existing crosswalk on Waldo Road is not an option for some.

“A much higher percentage of folks who are disabled are living at Grace and Dignity Village,” Gainesville City Commissioner Harvey Ward said. “We’re trying to make it as safe as possible for them to be able to get to the bus stop.”

The Florida Department of Transportation denied a bid for a traffic safety intervention in 2016. FDOT requires that more than five accidents that could have been prevented by a control signal or crosswalk happen within a year before a crosswalk becomes an option.

Rider Larry Johnson, 63, typically carries all his belongings in the small compartment of his walker. He has suffered multiple strokes and heart attacks since he came to Grace four years ago. He said he’s experienced and witnessed many near misses trying to get to the bus stop.

“There are people walking here that are disabled in walkers, canes, wheelchairs,” Johnson said. “You’re not even putting up a sign and a little bit of yellow paint saying be courteous?”

Having a bus stop closer to Grace would be ideal for him.

A turnaround, an area for buses to pick up riders in a parking lot, would be about $274,000, according to the Gainesville Public Works Department. Parts of the road leading into Grace and the parking lot would need to be repaved to support the weight of the buses.

An extra bus stop would also need to be added to make sure other buses stay on schedule, and an additional bus would cost about $140,000 a year to maintain, according to the evaluation.

Justin Harris gets to the bus stop at 5:15 a.m. six days a week to get to work at Ballyhoo Grill.

“That’s the first bus stop leaving the airport,” said Harris, 28, dressed in his cook uniform, pointing across the four-lane road. “Every single seat is full, people are standing up and every single one of them are going to work.”

Harris doesn’t think eliminating the westbound bus stop is the best option. He said riders would need extra time to get to the eastbound one, and don’t want to stay on a bus an extra half hour.

MPTO officials said they don’t want to create more problems trying to fix existing one. County Commissioner Mike Byerly suggested some eastbound stops should be evaluated for ridership. Perhaps the turnaround time could be reduced if any of them could be removed, Byerly said.

Creating a trolley service from Grace is another option. A cost estimate for hiring a driver, buying a golf cart or vehicle, and yearly maintenance still must be evaluated.

MPTO referred its options to the joint city/county committee that governs the shelter.

Warden said something ought to be done sooner rather than later.

“It’s a problem – and somebody is going to get killed out here one day crossing the street,” she said.

Shamarria is a reporter for WUFT News who may be contacted by calling 352-392-6397 or emailing news @wuft.org
Previous This Isn’t The First Time Hawthorne’s Only Middle/High School Has Faced Closure
Next ‘In God We Trust’ To Be Displayed In Public Schools